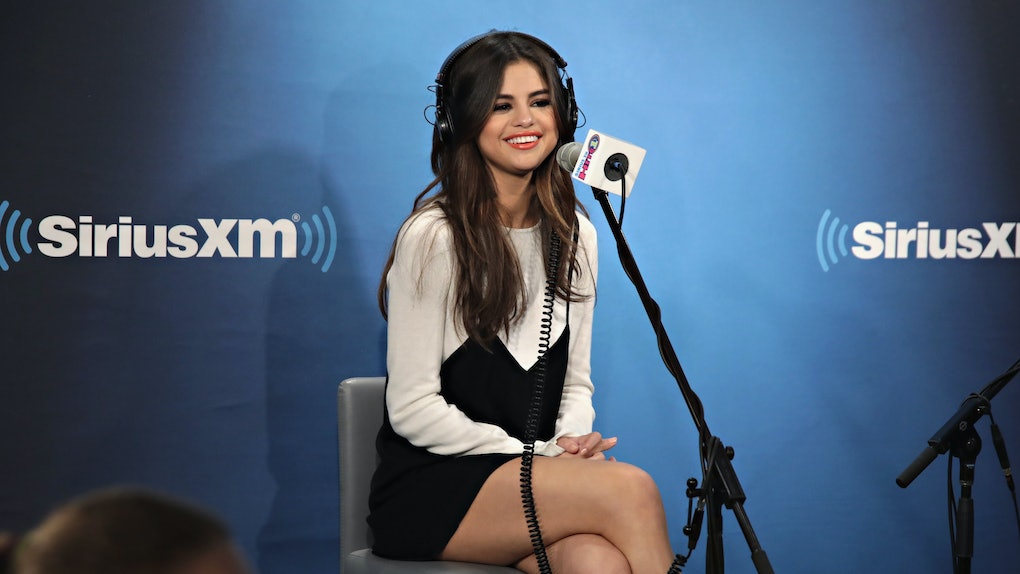 Selena Gomez's "Wolves" Lyrics Are So, So Romantic & Fans Are Already Obsessed

Selena Gomez has given us a new song and it sounds like it will be GOLD. Ugh, she honestly can do no wrong when it comes to her latest music. "Wolves" is being released on Oct. 25 and fans are already obsessed. The powerful lyrics have really connected with people, and the collaboration with Marshmello is just an added bonus. Selena Gomez's "Wolves" lyrics are so romantic, you'll for sure want to fall in love ASAP.

Gomez released the lyrics on Oct. 24, before the actual song. While there were a lot of theories floating around about what "Wolves" would be about, it seems that Gomez used her latest track to gush about someone she likes... a lot.

I've been running with the wolves

The song sounds super sexy and romantic. Selena recalls being "drunk on a feeling" which I think we can all relate to.

The songstress first dropped the news about "Wolves" on Oct. 19. The first post on Twitter featured Gomez and Marshmello sitting on the floor of a super swanky living room with the simple caption, "Selenators, meet the mellogang."

Although, the official news of the collaboration wasn't announced in the first tweet, fans hoped the picture was some kind of foreshadowing. People left tons of comments hoping, asking, pleading, begging for a Selena and Marshmello collab. Obviously, fans got their wish AND SO MUCH MORE.

Before the release of the lyrics, the biggest rumor surrounding "Wolves" was that it would be an intimate look into Gomez's battle with lupus. The caption that accompanied the icy blue cover art Gomez posted on Oct. 23 read, "I've been running through the jungle, I've been crying with the wolves. 10.25."

Whether you know this or not, it's hard to get anything past Selenators. Gomez has been in a battle with the autoimmune disease, Lupus, since 2013. This year, on Sept. 14, Gomez casually dropped the bomb that she underwent a kidney transplant as part of her treatment earlier in the summer.

The post answered fans' questions of why the singer was "laying low" and how her friend, Francia Raisa, was her donor. Gomez said,

With a giant hurdle like that conquered, this was the first indication that gave fans the idea Gomez would write a song about her struggle with lupus.

The second clue discovered by a fan was the biggest indicator of all — "lupus" in Latin translates to "wolf" in English. WHAAAAT? Yes. This led fans to believe "Wolves" was actually going to be a soulful song about Gomez's battle with Lupus.

As it turns out, "Wolves" is actually romantic AF. Although Gomez may not be ready to bring her battle with lupus into her music, singing about her love life is just fine. Do you, Selena.

More like this
Selena Gomez's New Collarbone Cross Tattoo Has A Spiritual Meaning
By Sydney N. Sweeney
With 'Like Water,' Wendy Found Her Biggest Cheerleaders In Her Red Velvet Bandmates
By Michele Mendez
I Tried Singing While Running Like Miley Cyrus & OMG, My Lungs
By Rachel Varina
Stay up to date