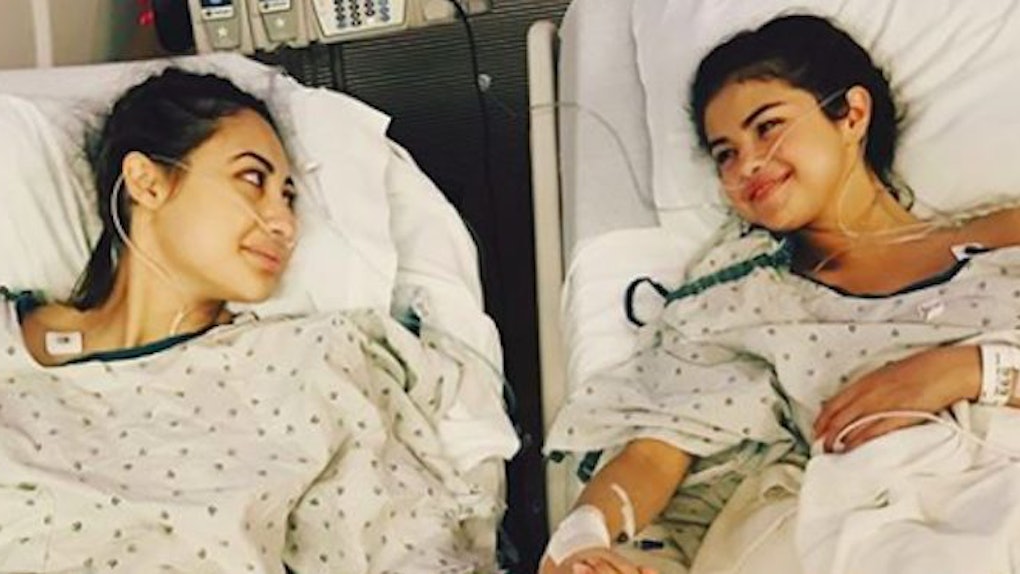 Who Is Francia Raisa? Selena Gomez Thanks Her "Beautiful Friend" After Kidney Transplant

Selena Gomez revealed this morning, Sept. 14, that she had a kidney transplant earlier this summer as part of treatment for her lupus. And considering how much of a Freeform stan you are, you may know who her donor is. Gomez's post included three pictures: one of her scar from the surgery, one of her during recovery, and one of her and her donor, Francia Raisa, in the hospital together (it's not clear if the photo was taken before or after the surgery). So, who is Francia Raisa? She's one of Gomez's closest friends and is the former star of The Secret Life of the American Teenager. Remember Adrian on the then-ABC Family show? That's Francia Raisa. Gomez said her "beautiful friend" gave her the "ultimate gift and sacrifice" by donating her kidney to the singer. The post said,

I'm very aware some of my fans had noticed I was laying low for part of the summer and questioning why I wasn't promoting my new music, which I was extremely proud of. So I found out I needed to get a kidney transplant due to my Lupus and was recovering. It was what I needed to do for my overall health. I honestly look forward to sharing with you, soon my journey through these past several months as I have always wanted to do with you. Until then I want to publicly thank my family and incredible team of doctors for everything they have done for me prior to and post-surgery. And finally, there aren't words to describe how I can possibly thank my beautiful friend Francia Raisa. She gave me the ultimate gift and sacrifice by donating her kidney to me. I am incredibly blessed. I love you so much sis. Lupus continues to be very misunderstood but progress is being made. For more information regarding Lupus please go to the Lupus Research Alliance website: www.lupusresearch.org/ -by grace through faith.

So here's everything you need to know about Selena Gomez's kidney donor Francia Raisa:

She and Gomez have been friends since before Gomez dated Justin Bieber.

The pair have been good friends for a long time. Back in 2013, they posted a video of them and three of their friends dancing to the song "Everybody Knows (Douchebag)." The video shows Gomez, Raisa, and three other friends laughing and enjoying themselves while dancing to the tune.

She was at the 13 Reasons Why premiere to support Gomez.

Gomez was an executive producer on the powerful/super controversial show, so the actress came out to support her friend at the Netflix premiere of 13 Reasons Why.

She uses Teyana Taylor as workout inspiration because obviously.

Teyana Taylor is the dancer who broke the internet when she starred in Kanye West's "Fade" music video. You know who we're talking about.

She's coming back to Freeform to star as a series regular in the black-ish spinoff, gGrown-ish.

Raisa will be co-starring alongside Yara Shahidi in the spinoff of ABC's hit comedy. The show is currently filming its first season and will premiere on Freeform in Jan. 2018.

Adrian and Grace were enemies-turned-best friends on The Secret Life of the American Teenager, but IRL, Raisa and Megan Park are good pals!

Girl, work it! I am personally terrified of dancing in high heels, so more power to you, Francia. You slayed that sh*t.

You saw her on Season 1 of Netflix's Dear White People.

She was one of Gabe's friends who hosted the dinner party Gabe and Sam attended in episode seven.

She has an excellent doggo.

Her dog's name is Roman and 13/10 people would cuddle him.

Raisa and Gomez's birthdays are only four days apart.

Although Raisa was born in 1988 and Gomez was born in 1992, friends having birthdays so close together is always a fun thing to be able to celebrate! And given their amazing friendship, they sure have a lot to be happy about.