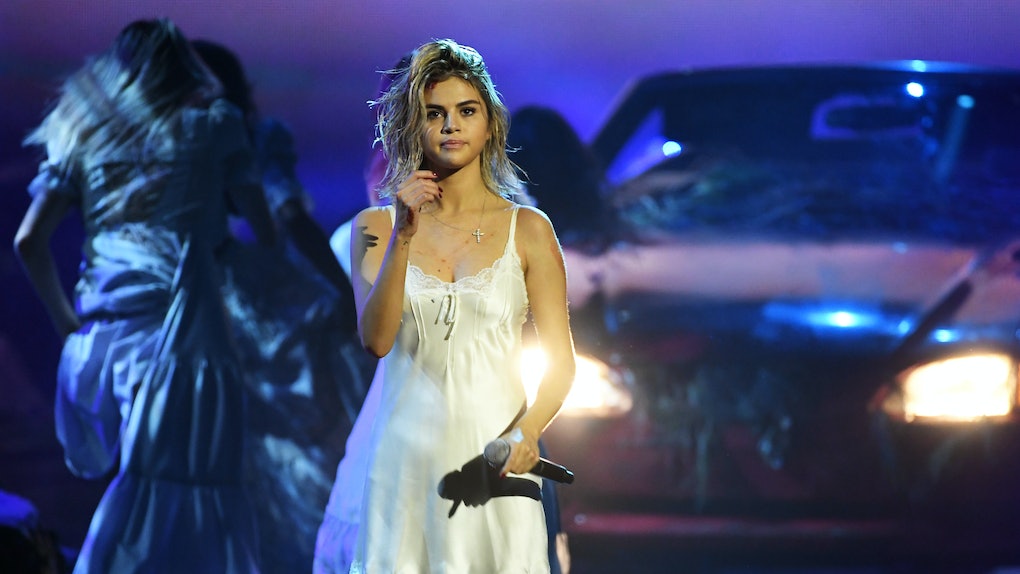 Earlier this month, we were all devastated to hear that the best romance of our time, Selena Gomez and The Weeknd, had ended. And though Selena quickly got back together with our other favorite of her exes, not even the resurrection of Jelena could ease the pain. So hearing Selena Gomez’s quote about The Weeknd and their relationship post-breakup is putting balm on the wound. It’s OK. It’s OK.

In a Nov. 30 interview with Billboard magazine, Gomez addressed the breakup with her now-ex, who she dated for ten months — and it was so positive, I could just cry. There’s no bitterness here, folks. Instead, Gomez says that the two still have a “true friendship” and that it was an amicable end. She said,

Something that I’m really proud of is that there’s such a true friendship [between me and The Weeknd]. I truly have never experienced anything like that in my life. We ended it as best friends, and it was genuinely about encouraging and caring [for each other], and that was pretty remarkable for me.

Feels. Considering how hard it is sometimes to even stay civil during a split, can I just say I’m super proud of Gomez and The Weeknd for apparently going the extra mile and managing to stay friends. Man, I hope my exes talk about me like this.

It probably helps that, despite Gomez quickly rekindling her romance with her old / new flame, Justin Bieber, that her relationship with The Weeknd ended for that most understandable of celebrity breakup reasons. Namely, that their work was taking them away from each other. The two reportedly broke up by phone (ugh), because their schedules were just too rough. A source told People at the time,

Of course, the interview wasn't all looking mournfully back at the past. Gomez also had some thoughtful things to say about her new (slash old) honey. Gomez and Bieber were off-and-on throughout most of the early 2010s, and are now pretty seriously “on” again following her split with The Weeknd, if the sightings are to be believed. Bieber reportedly reached out to Gomez after she underwent a kidney transplant in June, and from there, I guess, sparks flew.

Gomez said that in a way, the back and forth actually helped them get back together. She told the magazine,

I’m 25. I’m not 18, or 19, or 20. I cherish people who have really impacted my life. So maybe before, it could have been forcing something that wasn't right. But that doesn't mean caring for someone ever goes away.

Gomez and Bieber have been seen constantly by each others' sides in the weeks since her split with The Weeknd, though they didn't immediately confirm a relationship. The two were seen riding bikes together, attending a hockey game (with Gomez wearing his jersey no less) and even going to church and having breakfast together. Sounds pretty serious, if you ask me.

And oh yeah, there was also the moment when they were caught smooching at Bieber's hockey game on Nov. 15. That seems like a pretty big hint too.

Anyway, relationship drama and accompanying hair change or no, Gomez looks like she's moving on just fine. Still, it's nice to know that she's doing it in a healthy, respectful, and caring way. Love isn't dead, you guys. Not so long as we can all still speak well of our exes.