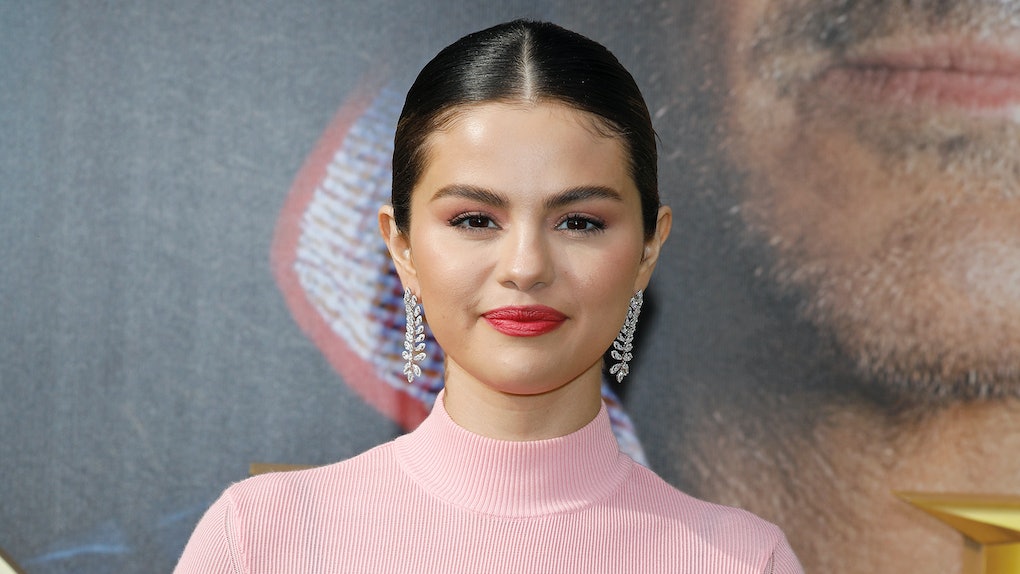 Selena Gomez has not been committed to a single hairdo since her time on Disney Channel, and her recent hair transformation is proof. On Feb. 10, Gomez revealed a new curly, caramel-colored lob on Instagram. Even without a caption, this haircut pic is already iconic, racking up more than 5 million likes. With new bangs, big curls, and caramel highlights, Gomez almost looks unrecognizable.

Wearing a soft, light grey sweater and seriously glamorous earrings, Gomez looks totally chic in her three pictures. Her new haircut just grazes her shoulders and looks effortlessly tousled. However, the isn't the first sighting of this new look. Gomez was recently spotted rocking her new 'do on set for a new music video, so it's possible that this look isn't here to stay. Though it's unclear which song from her new album Rare the singer is shooting a video for or when the video will be released, this new hair is a fresh look for Gomez, and I low-key hope it stays for a while. Nothing says power like new decade, new 'do, new music.

Gomez has long experimented with her hair. From curtain bangs to a straight, classic bob to a full '70s shag, she's never been afraid to try new looks pretty consistently. And, since her announcement of her Rare Beauty line on Feb. 4, the singer has been playing with her makeup, too. Gomez has worn brighter lip colors, most likely from Rare, such as the dark berry color in her announcement video and her coral lip at the Hollywood Beauty Awards. In the wake of Gomez's emotional AMAs performance in November 2019, the bold colors and fresh chop seem to signal that the singer is reaching new levels of confidence.

"I want girls and boys and men and women to feel comfortable ... We are not meant to look like everybody else, we're meant to look like ourselves," Gomez said on Instagram Live about Rare Beauty. With the addition of a recent neck tattoo, a refreshed makeup color palette, and a great new haircut, I think it's safe to say Gomez is embracing herself.