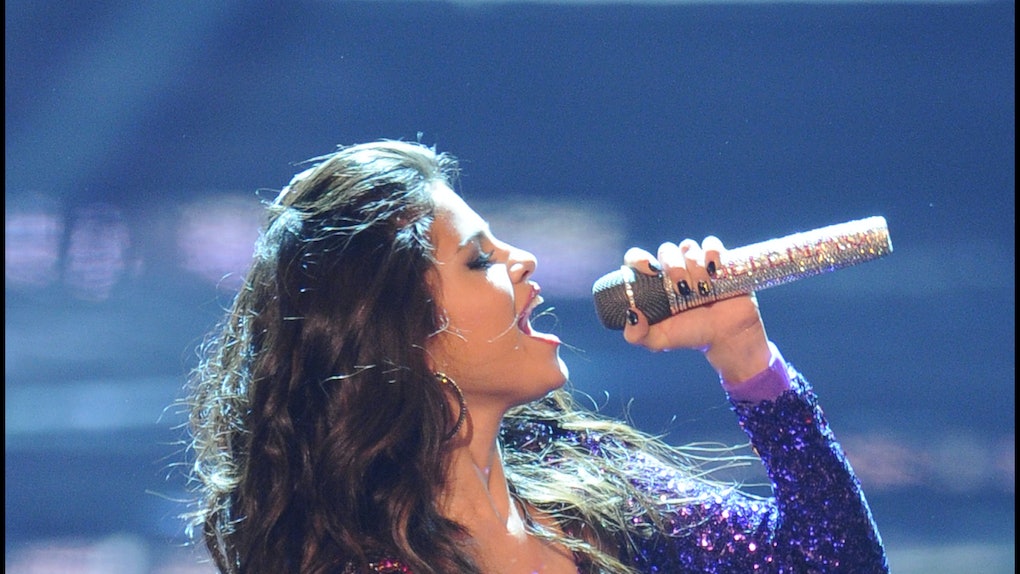 "Lose You To Love Me" is undoubtedly one of Selena Gomez's most personal hits to date. And when it first got released, Selenators everywhere were literally in tears. It's already an emotional bop, but seeing as fans suspect her ex, Justin Bieber, was the inspo behind the song, it only heightened the emotional impact. So, unsurprisingly, the first-ever live rendition of the tune was intense. Selena Gomez's "Lose You To Love Me" 2019 American Music Awards performance is a must-see.

The anticipation for Gomez to hit the AMAs stage was high, especially considering she hasn't performed new music at an awards show since she sang "Wolves" at the 2017 American Music Awards. And with lyrics like: "We'd always go into it blindly / I needed to lose you to find me / This dancing was killing me softly," fans already knew it would be one of the night's highlights.

Gomez joined the likes of Kesha, Camila Cabello, Billie Eilish, Dua Lipa, Lizzo, Thomas Rhett, and Artist of the Decade recipient Taylor Swift as one of the artists to hit the AMAs stage in 2019.

As soon as she stepped on-stage and sang the first words of "Lose You To Love Me," it was clear Sel was there to dominate the stage.

Sel's performance was streamed in black and white and she served up some major old school Hollywood glamour in a fitted floor-length dress. The performance may have started out slow and sultry, but, Gomez soon turned up the heat when she whipped out a second look for her second track. Gomez slipped into a striking metallic bodysuit with glittering embellishment and was shining so bright.

Fans couldn't get over how good Gomez looke. And don't get me started on her hard-hitting dance moves.

Nothing was sweeter than Taylor Swift's reactions to her performance.

Gomez set the bar high for the 2019 AMAs so everyone else on the bill better bring their A-Game.

More like this
These Tweets About BTS' 'Bang Bang Con 2021' Sum Up The Epic Performance
By Cianna Garrison
Selena Gomez's New Collarbone Cross Tattoo Has A Spiritual Meaning
By Sydney N. Sweeney
How Bahari Became Instant BFFs After Starting Out In Different Parts Of The World
By Kaitlin Cubria
Stay up to date