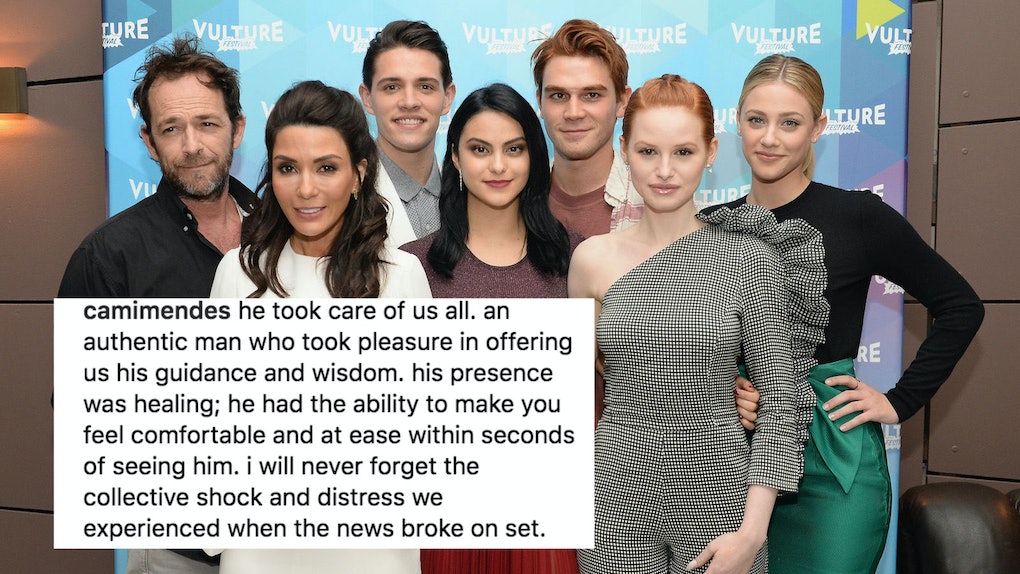 More members of Riverdale's main cast are now opening up about how Luke Perry's sudden death shocked and devastated them earlier this week. Perry died after suffering a massive stroke on Monday morning at age 52. The actor was still working on the currently airing third season of Riverdale, and a new episode featuring his character of Fred Andrews aired on Wednesday night, two days after his death. In the wake of the unexpected death, Perry's castmates have shared a number of tributes and stories about him. Now, Riverdale's Cole Sprouse, Camila Mendes, and Madelaine Petsch shared tributes to Luke Perry following his first posthumous appearance on the show.

Immediately after the news of his death broke, Riverdale halted its production indefinitely. However, the CW had already scheduled a handful of episodes to air over the next few weeks. The first new episode aired on Wednesday night, two days after Luke Perry's death, and it featured a brief scene of Perry's character Fred Andrews taking care of his son Archie after he had been attacked. The episode was also dedicated to Luke, as showrunner Roberto Aguirre-Sacasa said that all remaining episodes would be.

Several Riverdale cast members had posted tributes or memories about Luke Perry immediately following his death, but understandably, much of the show's main cast needed some time to deal with the devastating news. Camila Mendes shared her reaction on Thursday morning, writing that the set experienced a collective shock and distress when they found out about the death:

Cole Sprouse also opened up about Luke Perry's death in an interview for his upcoming movie Five Feet Apart. When asked about Perry, Sprouse noted how much love he has seen from fans all over the world, which shows just how much Perry meant to everyone:

We're recovering. It's obviously not the easiest thing to talk about. But he was well loved and there's been an outpouring of emotional support from people around the world, which just goes to show what a wonderful person he was and how much he impacted people's lives and impacted our lives.

Madelaine Petsch also shared some sweet memories of Luke Perry, thanking him for teaching her that a cast can become a loving family:

Earlier this week, Lili Reinhart shared a poem on her Instagram that captured her reaction to losing Luke Perry. Sadly, Luke Perry will be disappearing from Riverdale towards the end of this season, but it is clear that he will continue to live on in the hearts of the show's cast, crew, and fans.

More like this
These Theories About Hulu's 'How I Met Your Father' Spinoff Are Legendary
By Rachel Varina
Paramount+'s 'iCarly' Revival: Release Date, Cast, Trailer, & More
By Cianna Garrison
Netflix's 'Bridgerton' Spinoff About Queen Charlotte Will Deliver So Much Royal Drama
By Cianna Garrison
Stay up to date