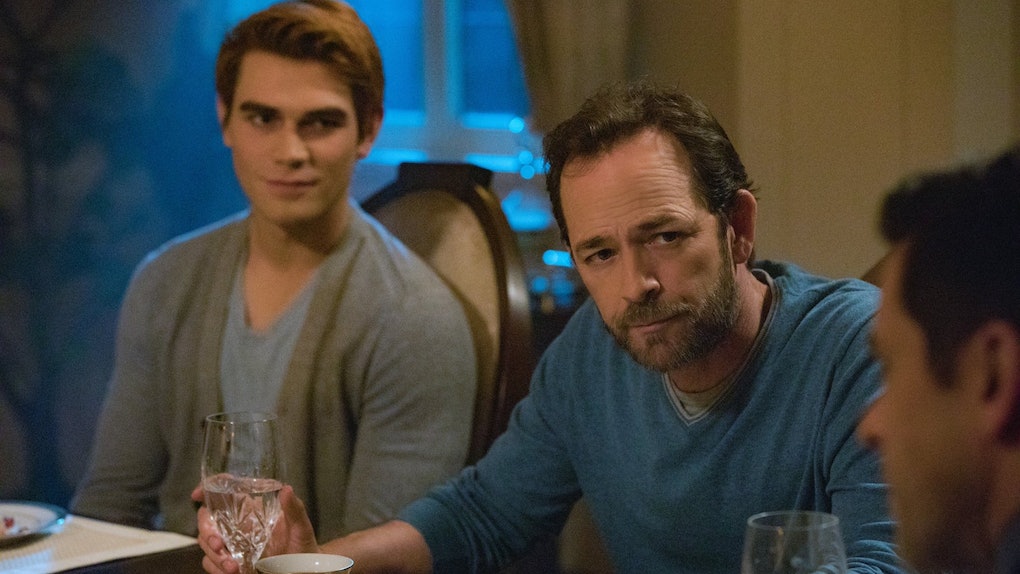 Riverdale will still air as usual on Wednesday night, but the cast, crew, and fans are in a more somber mood than ever going into the new episode. On Monday morning, Riverdale star Luke Perry died after suffering a massive stroke. While the show's production has been put on hold, its air schedule has not changed, and Wednesday night's new episode will air just two days after Perry's death. And the episode will feel extra special, because the first Riverdale episode after Luke Perry's death focuses on Fred Andrews helping out Archie, showrunner Roberto Aguirre-Sacasa revealed.

Wednesday night's new Riverdale episode "Fire Walk with Me" will mark Luke Perry's first posthumous appearance since his death two days earlier. Although Perry's character of Fred Andrews does not regularly appear in every episode, Riverdale showrunner Roberto Aguirre-Sacasa confirmed on Wednesday morning that Fred will indeed be featured in the new episode. Aguirre-Sacasa said that the episode will show Fred doing what he does best, helping his son Archie. The showrunner also revealed that the new episode will be dedicated to Luke Perry, as will every other future episode of the show.

Check out Roberto Aguirre-Sacasa's tweet about Luke Perry's involvement in the new episode below:

After the news of Luke Perry's death broke on Monday, Riverdale suspended production on its currently airing third season indefinitely. But the CW had already scheduled airtimes for its next handful of episodes, so the show should remain on a weekly schedule for the next few weeks. It is unclear if anything may shift after that, depending on how long production stays down.

Luke Perry died in an emergency room on Monday morning several days after experiencing a massive stroke in his Los Angeles home. Perry's rep provided Elite Daily with a statement:

While Luke Perry was best known for his lead role in the '90s hit teen drama Beverly Hills, 90210, the actor had recently returned to the teen drama genre with a main part on Riverdale. Perry had starred in three seasons of show prior to his death.

The CW has already picked up Riverdale for a fourth season, so the show is now faced with the predicament of how to properly say farewell to Luke Perry's character of Fred Andrews. Since Fred is raising Archie on his own, him disappearing will also mean Archie having to find a new home. The clear answer would be Archie's out-of-town mother Mary moving back to Riverdale, but actress Molly Ringwald is only a rarely appearing guest star at this point.

The new episode of Riverdale will air on Wednesday night at 8 p.m. ET on the CW.