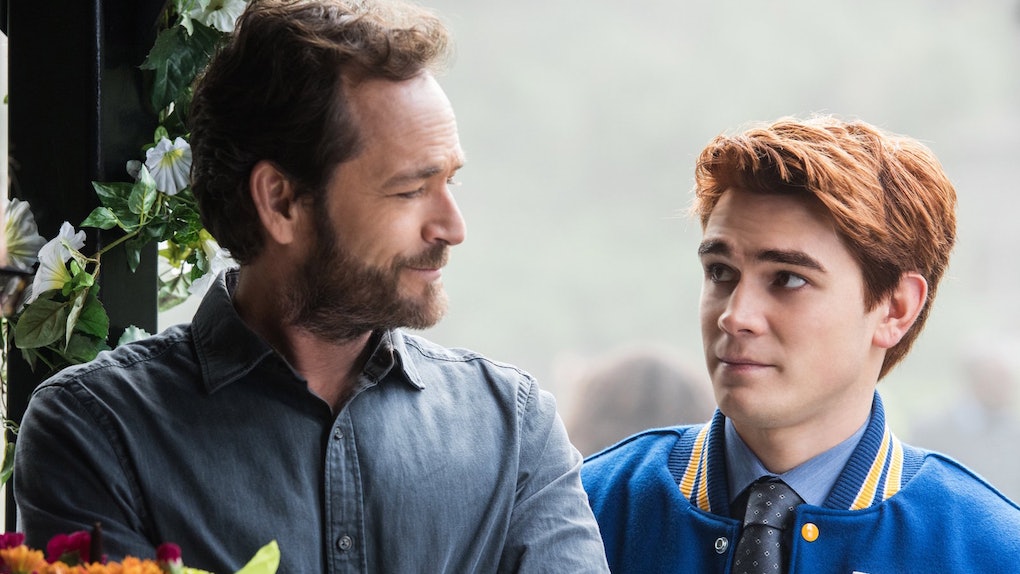 The 'Riverdale' Cast's Reactions To Luke Perry's Death Are So Upsetting

Luke Perry's death on Monday morning devastated everyone who has ever owned a television, but it hit his Riverdale costars especially hard. The actor defined the '90s by starring as high school bad boy Dylan McKay in Beverly Hills, 90210, and in the past couple of years, he returned to teen dramas, only as a dad this time. Perry starred as the loving father Fred Andrews on Riverdale, which he was still working on before his death. The Riverdale cast's reactions to Luke Perry's death are so sweet and will make every fan so sad.

Luke Perry's reps confirmed to Elite Daily that the actor died on Monday following a massive stroke. He was 52 years old. Read the full statement below:

While best known for his lead role on the '90s teen drama Beverly Hill, 90210, Luke Perry gained a new generation of fans when he joined Riverdale in 2017 to play Fred Andrews, the supportive single father of Archie. Perry starred as Fred for three seasons of the show before his death. The Riverdale cast and crew was in production on the latter half of Season 3 (which is currently in the middle of airing) when news broke of Perry's death. Variety reported that Riverdale shut down production for the day, and the show's executive producers released a statement about the tragic loss:

Riverdale's writing staff also posted a sweet tribute to Luke Perry, as did Molly Ringwald, who played Luke's on-screen wife Mary Andrews on the show. Showrunner Roberto Aguirre-Sacasa posted a tribute as well on his Instagram:

Other Riverdale cast members shared their reactions as the days went on:

TMZ first reported that Luke Perry had a severe stroke at his Los Angeles home last Wednesday. While Perry was still in the emergency room over these past several days, his Riverdale co-stars Lili Reinhart, Cole Sprouse, Casey Cott, Skeet Ulrich, and Mädchen Amick shared their love for him with tributes on Instagram:

Although the Riverdale team has not yet concluded production on Season 3, Luke Perry has very likely already filmed a handful of future episodes that will air over the next few weeks. But of course, Fred Andrews will sadly have to disappear from the show towards the end of this currently airing season. The CW picked up Riverdale for a fourth season at the end of January, but since production has not yet begun on that future season, Luke Perry will certainly not appear in it.

Riverdale is scheduled to air its next new episode this Wednesday, March 6 at 8 p.m. ET on the CW.

More like this
The 'Glee' Cast's Tribute To Naya Rivera At The 2021 GLAAD Media Awards Was So Moving
By Abby Monteil
These Fake 'Riverdale' Brand Names Are Even Better Than The Real Thing
By Rachel Varina
When Will 'Riverdale' Season 5 Return In 2021? Its Mid-Season Break Is Long AF
By Rachel Varina
Stay up to date