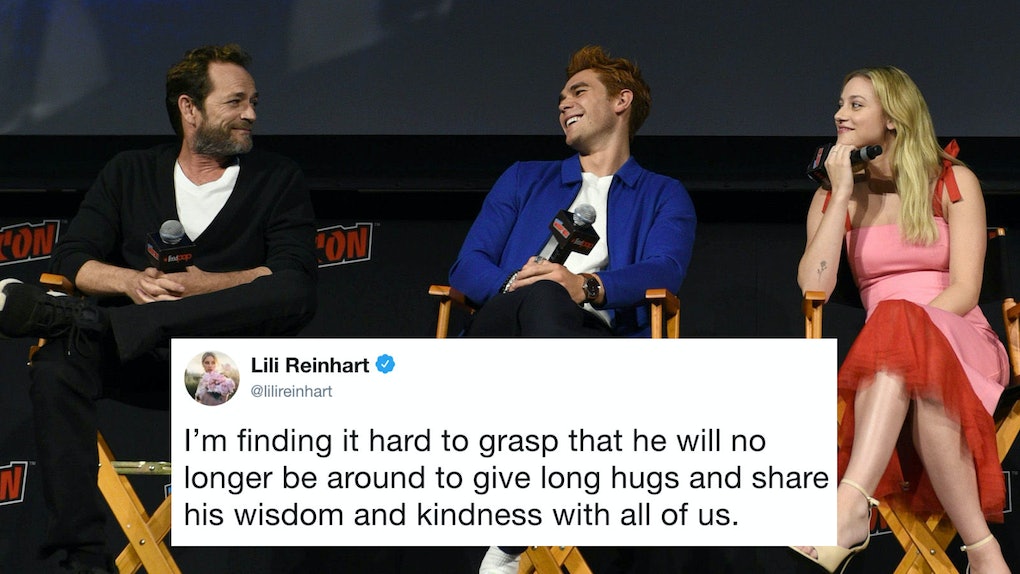 The town of Riverdale lost its only good parent on Monday, and the show's cast is still reeling from the loss. Following the devastating news of Luke Perry's death, a number of his Riverdale cast-mates have shared touching tributes and remembrances of the actor. In particular, Lili Reinhart expressed her sadness in a moving poem on Instagram. Lili Reinhart's poem for Luke Perry shows just how much he meant to the Riverdale cast.

On Monday morning, Luke Perry's reps confirmed to Elite Daily that the actor died after a massive stroke:

While Luke Perry was best known for playing the '90s bad boy Dylan McKay on Beverly Hills, 90210, he had recently gained a new fanbase by starring as Archie's father Fred Andrews on the CW's Riverdale. Perry was still working on the show's currently airing third season before his stroke. After the news of his death broke, Riverdale wrapped production for the day. Many of his Riverdale costars shared their grief with tribute posts online.

Lili Reinhart's post about Luke Perry's death was particularly moving. The actress posted a short poem on her Instagram stories the night of Perry's death, which was about how world-shattering his death felt and how hard it is to move on from it. You can read the full poem in the screenshots below:

Lili Reinhart also shared some of her thoughts on Twitter. She posted about her disbelief at Luke Perry no longer being around to share his hugs and wisdom on the Riverdale set:

As of right now, it is unclear how Riverdale will move forward without Luke Perry to play Fred Andrews. The show shut down production on the day of his death, but it is still scheduled to stay on track with its release schedule, meaning that it will still air a new episode this Wednesday night. The CW also picked up a fourth season of Riverdale at the end of January, which has yet to enter production. Since Fred has been raising Archie on his own, and Archie is still just a teenager (which can be hard to remember given all the craziness he's been through), Archie will likely have to find a new place to live.

But for now, Luke Perry will likely still appear as Fred Andrews for a few more episodes this season. Riverdale's new episode will air on Wednesday at 8 p.m. ET on the CW.