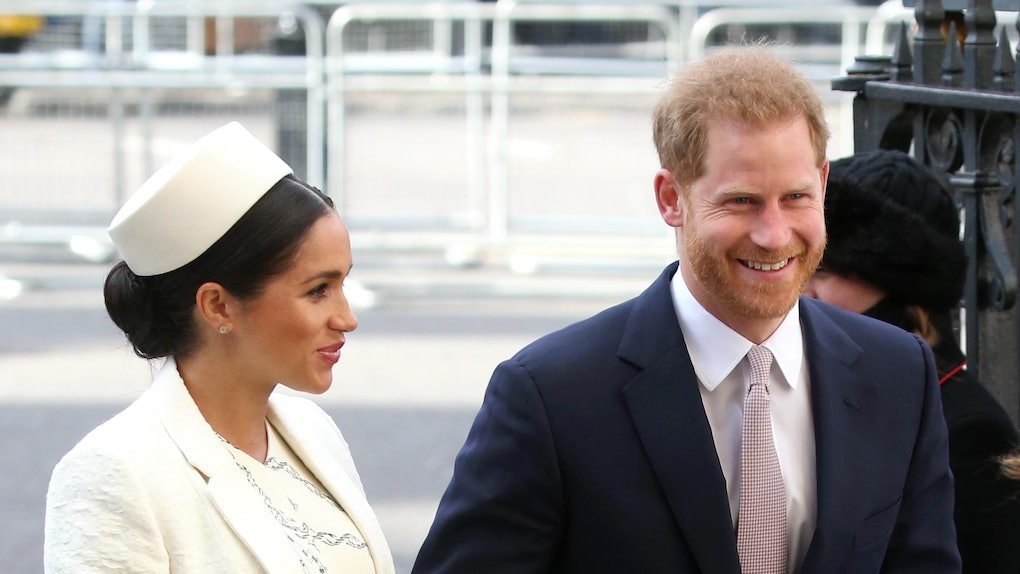 You may have heard that when you love someone, your body language often begins to mirror theirs. You might always walk with the same foot forward, or your hands find each other's and your fingers interlock time and time again. Your body language is often beyond your control, and it can perfectly exemplify how in sync you and your partner are — which is exactly what Prince Harry and Meghan Markle's photos together show. In almost all of the pictures of the Duke and Duchess of Sussex walking together, you can frequently see two things they always do, and these gestures say more about their relationship than you'd think.

Above all else, Traci Brown, body language expert and author of Persuasion Point: Body Language for Speech and Influence says that Harry's body language with Meghan is always protective. "He’s using it all to protect his lady," she tells Elite Daily. "You could say that it personified traditional gender roles, but they’re stepping into it as a couple, which makes the bond even tighter and more heart-warming to watch."

Their mimicking of each other and their consistent body language show that they both equally want to be together, Patti Wood, body language expert and author of SNAP: Making the Most of First Impressions, Body Language, and Charisma, says. "There's not a lot of tension," Wood tells Elite Daily. "There's sort of a mutual agreement where he's not having to lead her, and she's not having to pull him back. If you look at their steps, they both are energetic. They both have a certain buoyancy." And as for the two specific things that almost every one of their pictures has in common? Harry and Meghan are always in sync, and they always have a secure hand-hold. See for yourself.

One thing you'll definitely notice in all of Harry and Meghan's pictures is that they're almost always stepping forward with the same foot and their posture mimics each other's. This body language cue shows that the two are always naturally in sync, body language expert Lisa Mitchell says. "Even with a difference in stride lengths, the cadence stays steady and they are always striding together," Mitchell tells Elite Daily. "This type of step sync-up happens naturally as we tune into our partner's normal pace and comfort level."

Another common factor Mitchell noticed in all of Meghan and Harry's pictures is that they hold hands in a specific way. "While some couples intertwine their fingers when they hold hands in a more intimate display, Harry and Meghan clasp hands with his on top, covering her's protectively," Mitchell points out.

Harry and Meghan's clasping hand-hold, as opposed to intertwining fingers, isn't the only example of Harry being protective of his wife. He's also a step ahead in most of the pictures, which Wood says she sees often in expectant fathers. "He's protecting the front of her body ever so slightly with the way he's walking," she points out.

Mitchell echoes this. It shows "Harry's continued support and protection of Meghan, which reinforces his protective nature that he displays with turning his body toward hers and walking slightly in front of her most of the time," she explains. "He uses his body and his hand to 'shield' her in some form and help her feel more secure. It's a caring gesture as much as it is a protective gesture."

It's nice to see that Prince Harry and Meghan Markle have displayed these consistencies throughout their entire relationship. It goes to show that their love for each other hasn't waned, and that not only is there a lot of love between them, but that they have a really strong, emotional connection as well. Here's hoping we continue to see this connection unfold and develop even further in years to come.