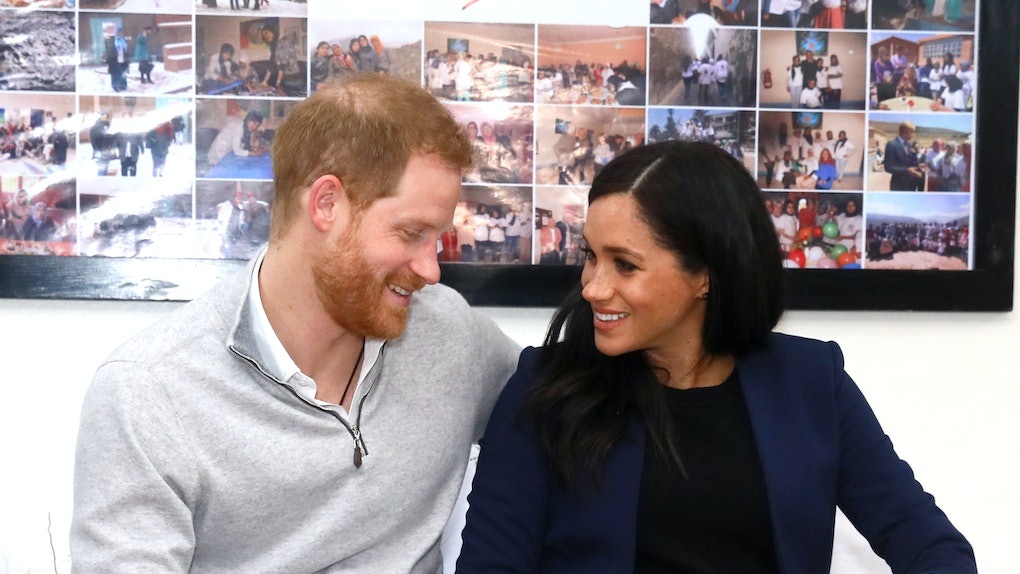 Meghan Markle and Prince Harry really are living the dream. They got married last year in the ultimate fairytale wedding at Windsor Castle while the whole world watched in awe of their love story. Then, just five months later on October 15, 2018, the couple announced that they're expecting their first child, due in the spring. Seriously, does it get more couples goals than these two? I mean, just look at all the adorable photos of Prince Harry and Meghan Markle since announcing her pregnancy.

There's just something so sweet — and not to mention glamorous — about watching Meghan's baby bump grow as the two of them jet set around the world, continuing to do their work as representatives of the British royal family. Even as they visit places as far away as New Zealand and Morocco, there's one thing that you can always count on with these two and that’s just how in love and connected they always appear to be. If anything, Meghan’s pregnancy has really put even more of a glow on this golden couple. Like I said, they're living the dream, which is clear in all the photos taken of these two since they announced they'll soon be three.

1. They take a moment to connect while walking in Morocco.

This month, the couple took a three-day royal tour in Morocco. The visit included this visit to the Andalusian Gardens in Rabat, where the couple didn't miss the opportunity to stroll together hand in hand.

2. These two always look like they're having a blast together, even when just grabbing a bite.

On this same tour in Morocco, the royal couple (and baby royal) attended a special cooking demonstration for underprivileged children in Morocco. Honestly, these two are just destroying all other couple goals. Seriously, everyone just take a seat.

3. The royal couple shares a sweet moment with a beautiful horse.

Nope. This photo of them petting a beautiful horse while visiting the Moroccan Federation of Equestrian Sports is really too much. Let’s just move on.

4. Here they are looking like the most glamorous couple ever.

Meghan continues to prove that pregnant ladies are fierce and gorgeous in her bespoke Dior gown, which she wore to a reception hosted by the British Ambassador to Morocco. Ya know, as one does.

While it's not super common to see the royals getting up close and personal, while on an official trip, these two just can't seem to resist and I am living for it. Here, we see them getting cuddly while visiting a high school in Asni, Morocco. Aww.

6. Find someone who looks at you like these two look at one another.

Want to know how these two feel about each other? Just take a look at the way they look at one another. It's all love and sweetness. Here, we see Harry admiring a henna tattoo Meghan received from a student at an Education For All boarding house in Asni Town in the Atlas Mountains. It was done in celebration of Meghan’s pregnancy.

7. These two always have so much fun together.

It's always nice to see a moment when Meghan and Harry are a little more relaxed and letting their hair down. That's when you can really see their chemistry. We get a little glimpse of it here in a photo taken in January 2019 during the couple’s first joint official event since making their big announcement.

8. These two have romance on lock.

Back in the November 2018, just a month after the couple had shared their exciting baby news, the couple took a romantic trip to Rotorua in New Zealand, which included hiking through the the redwood forest. It was the perfect fairytale setting for their love story.

9. Just a romantic stroll through the redwoods. NBD.

Here they are again, just strolling through the forest together, but there is one adorable detail you may not have noticed. That puffy jacket that Meghan is wearing? Yeah, that's Harry’s jacket. The afternoon was chilly, so he gave it to keep his wife cozy. I’m not crying, you’re crying.

10. These two show off how amazing they're about to be as parents.

Back in October 2018, in their first public outing following her pregnancy announcement, the couple made an appearance at a special reception in Australia during their royal tour. During the event, they took a moment to greet the public and gave us a sneak peek at what unbelievably adorable parents they're about to be. Seriously, just look at Harry’s face! That's a guy who just can't wait to be a dad — and I can't wait to see it!

If these two are this adorable just leading up to the birth of the baby, I can't even imagine how much cuter they'll be once the royal kiddo arrives. But I guess we’ll find out soon enough, since the baby is due to make its big arrival in just a couple of months. So exciting!