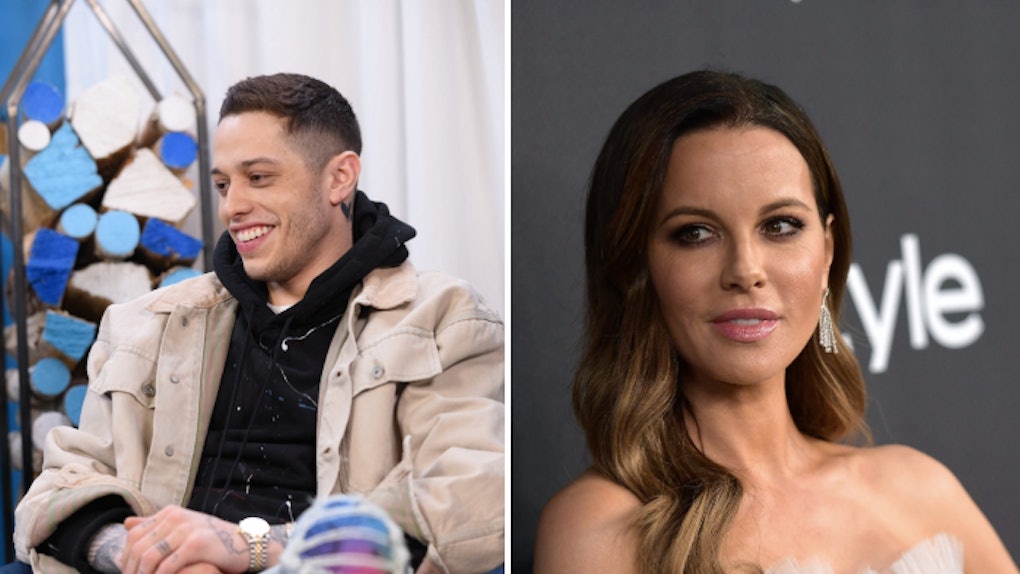 Without a doubt, Pete Davidson and Kate Beckinsale are the most unexpected couple of 2019 so far. Davidson, fresh off his split from Ariana Grande last October, has been linked to Beckinsale since early January, and lately the pair hasn’t been shy about publicizing their relationship. It’s safe to say this match feels like it came out of nowhere, and a lot of people (me included) are scratching their heads in confusion and surprise. A look back at Pete Davidson and Kate Beckinsale’s relationship timeline proves this couple is heating up faster than ever.

I can’t lie, I’m confused AF about this relationship. But I guess the heart wants what it wants? Davidson and Beckinsale appear to be totally smitten with one another, and their body language proves that their sexual chemistry is off the charts. Beckinsale is definitely a different vibe than Grande, but it’s good to see Davidson moving on after a pretty heart-wrenching breakup. And honestly, as long as they're both happy, it doesn’t matter what anyone thinks! To help figure out how this whole thing has blossomed between Davidson and Beckinsale, I took a deep dive into every detail we know so far. Buckle up, friends, because it’s a rollicking ride.

Davidson and Beckinsale are spotted flirting at the Golden Globes after-party. A source told Page Six that the pair “cozied up together” on the patio while their friends kept going in to get more drinks. This is the first time the comedian and actress were ever seen interacting, and after the flirty evening, romance rumors started to fly.

During Davidson’s stand-up show in Tarrytown, New York, an audience member shouted Beckinsale’s name. The comedian "smiled sheepishly," according to Us Weekly, and said "yes." So is something going on between them?! This sure feels like Davidson hinting at it to his fans.

After laying low for the rest of January, the pair is photographed holding hands! It’s happening, people. Davidson and Beckinsale walk out of the Largo and the Coronet club in Los Angeles together and straight into a waiting car. And might I say, Davidson looks pretty proud of himself being spotted with Beckinsale. Looks like they’re not trying too hard to hide the fact that they’re an item.

Now that these hand-holding photos have the internet freaking out, everyone is naturally trying to break down the ins and outs of the rumored relationship. A source tells E! News that the relationship is “a casual thing” since Davidson and Beckinsale live across the country from one another (he in New York, she in Los Angeles). The source also says that Beckinsale “loves all the laughs she has with him.” I have to admit, that’s really sweet.

The Sun reports that the pair is “smitten” with one another and planning a vacation to spend some time together away from the cameras. An insider says that Davidson and Beckinsale are trying to keep things under wraps, but “it's hard as they can't keep their hands off each other in public!”

Davidson’s recent ex Ariana Grande finally weighs in, telling a TMZ reporter that the new couple is ‘so cute!’ when asked about her thoughts. This indicates that there’s no bad blood between Davidson and Grande, and the pop star is happy for her ex and his newfound love.

Despite the previous reports that their relationship is casual, a source tells Heat magazine that Davidson is “absolutely besotted” with his new boo. Meanwhile, the source says, Beckinsale’s friends are worried about her “dating someone who’s as vulnerable as Pete” — who has spoken openly about his struggles with borderline personality disorder and depression.

Beckinsale drops a not-so-subtle hint about her relationship in an interview with Extra, saying her ideal man is “funny.” Well, Davidson certainly fits the bill!

After a few weeks without any photos of the two together, fans are rewarded with pictures of Davidson and Beckinsale leaving an SNL after-party together in New York.

For anyone who was still uncertain about whether this relationship was happening, all doubt flew out the window when Davidson and Beckinsale were spotted making out at a Rangers game. The photos are… well, a lot, to put it lightly. (Antoni Porowski, who was sitting next to the couple, had a distressed facial expression that basically sums it up.) The two were all over each other and super cuddly, and they weren’t afraid to show off their love to the world.

Well, it looks like Davidson and Beckinsale are as happy as ever. Despite harsh words from Beckinsale’s ex Matt Rife, who urged Davidson to "run" from the relationship, the couple is enjoying every moment of their new romance. More power to them — and hey, their relationship is even Ariana-approved! For now at least, it looks like this hot new duo is here to stay.