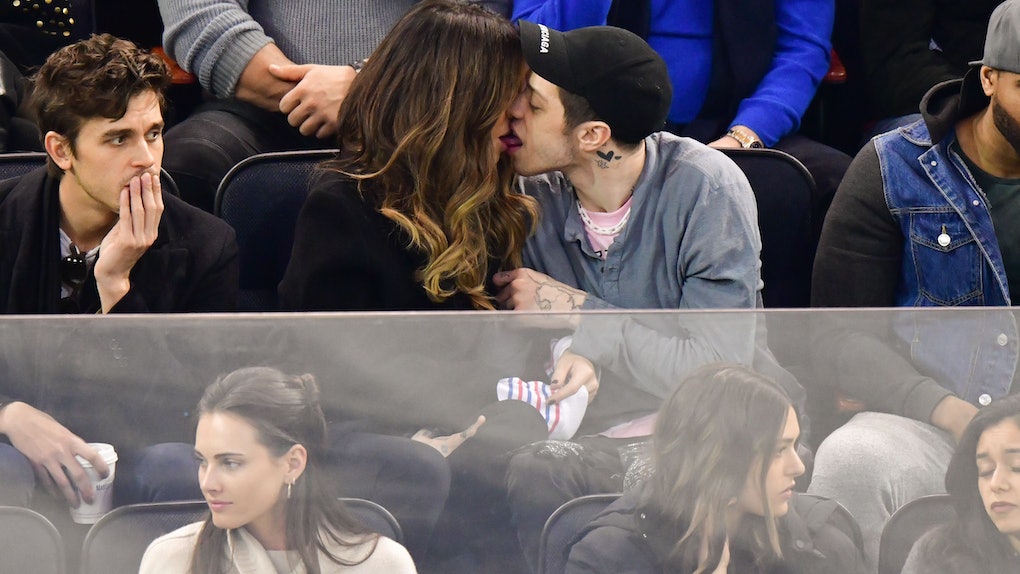 When it comes to unexpected celebrity couples, Kate Beckinsale and Pete Davidson might just take the cake. It seems like the two started seeing each other out of nowhere, and have absolutely no qualms about broadcasting their relationship to the world. They haven't shied away from paparazzi and don't deny each other affection while out in public. I respect it! Seriously, these photos of Pete Davidson and Kate Beckinsale making out at a hockey game are iconic. The two surprised fans everywhere when they reportedly hit it off at a Golden Globes party in January, and have been hot and heavy ever since.

On Sunday, March 3, the two hit the town at a New York Ranger's game at Madison Square Garden. While enjoying the sportsmanship, the pair also enjoyed each other's tongues, and there are plenty of photos. Previously, Davidson and his new lady had yet to actually lock lips in a public setting, instead opting to hold hands while looking lovingly at each other. But that all shifted when Davidson and Beckinsale just went for it at the hockey game, and it looks like there was barely any holding back.

Yes, that is tongue. Like I said, Beckinsale and Davidson weren't holding back, and really decided to just have some fun at the game. Honestly, good for them! Just because they're celebrities doesn't mean they should have to hide their relationship. If they're happy together and have a good time, then that's all that matters.

Of course, these photos are still just really... something.

Sure, these photos are fun, but really, it seems as though Beckinsale and Davidson are both just looking for a good time. According to People, the mother and successful actress reportedly isn't looking to settle down right now. "Kate’s not looking to get serious with someone," a source reportedly told the magazine. "She wants to have fun with guys and date around."

Additionally, Davidson might not be ready to get serious, either, after the comedian ended his engagement to Ariana Grande in October 2018. In fact, a source reportedly told People that Davidson was "very much enjoying being single as he is focusing on himself," back in December 2018.

Clearly, Beckinsale and Davidson were having an amazing time on Sunday. These photos have "new-couple date" written all over them, who can blame them for not being able to resist? Not all relationships have to be serious, y'all, and as Davidson is coming off of a broken engagement, and Beckinsale went through a divorce in 2016 (she was married to her ex-husband, Len Wiseman, for 12 years), it's safe to say these two deserve some good fun. They don't owe anyone an explanation, and deserve to make out as much as they want, with or without Antoni by their side! (But seriously Antoni is the biggest #mood in these pics. Someone rescue Antoni. Thank you.)