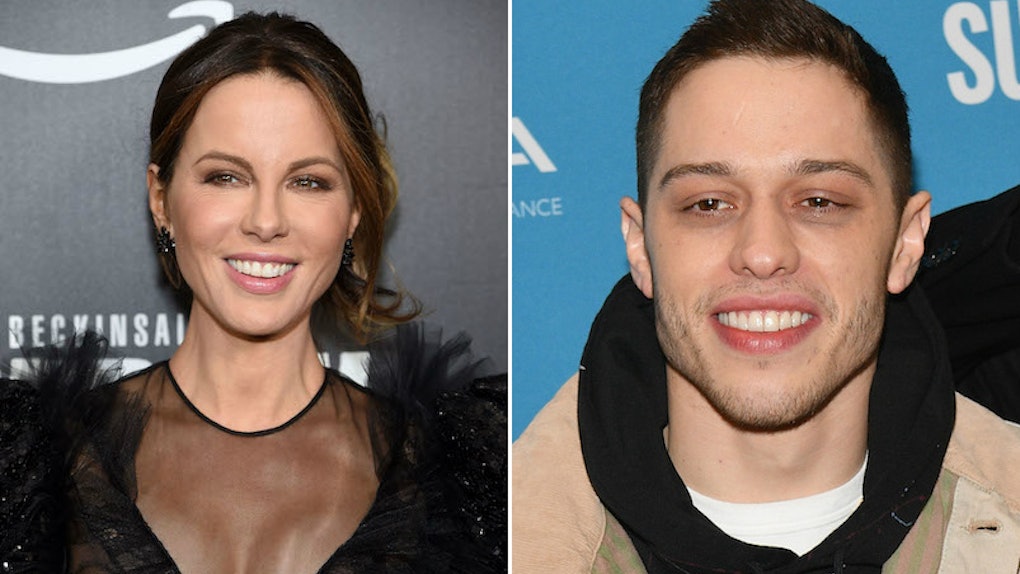 Here's Why Kate Beckinsale Likes Pete Davidson, According To Reports

In case you blinked and missed it, Kate Beckinsale and Pete Davidson have been getting pretttyy cozy together, causing everyone to scratch their heads in wonder. But hey, they seem to be enjoying each other's company, so let's not knock it, OK? But for any of you who aren't yet convinced and are trying to figure out why Kate Beckinsale likes Pete Davidson, it's apparently because he does something in particular when they're together (and no, that's not an innuendo, so get your mind out of the gutter).

But first, let's have a little look into how all of this came to fruition. Speculation that Beckinsale and Davidson were seeing each other came about on Jan. 6 at the Netflix Golden Globes after party. Then, on Feb. 1, Davidson performed his comedic stand-up routine at the Largo at the Coronet, and who else was in the audience but actress Kate Beckinsale.

According to People, the two stars left the venue holding hands, indicating that these two were possibly more than just friends. Davidson and Beckinsale's reps didn't immediately respond to an Elite Daily inquiry on the report.

Now, let's fast forward to this past weekend, where the pair made things very clear that they were hooking up by, well, hooking up. On Sunday, March 3, Davidson and Beckinsale were spotted making out at a Rangers game in Madison Square Garden, which ultimately turned Queer Eye's Antoni Porowski into a hilarious meme:

So, look. Both Kate and Pete are unbelievably talented and attractive. But this is Kate Beckinsale we're talking about! She's basically everyone's celebrity crush. How did Davidson make that happen?

Well, according to E! News, it's because Pete has a certain quality that she likes in a man: a sense of humor.

"Kate has spent some time with him and thinks he's very funny and charming," the source told the outlet, adding, "Kate’s very into Pete." The source continued, noting,

You wouldn’t necessarily put them together, but it’s working for now. [Kate is] excited about getting to know him and hoping to spend more time with him ... The biggest thing going for Pete is his humor. He always has her laughing and that’s a good feeling to have.

Elite Daily reached out to both Beckinsale and Davidson's team for comment on the report, but did not hear back by the time of publication.

A sense of humor is a big selling point when it comes to someone you're dating, so I can totally get behind that reasoning. Plus, the source said that "they talk a lot and never run out of things to say," which I guess is a pretty good quality to have in a relationship also.

And if you're worried that Pete's feelings may get hurt, don't worry. It seems like he's not looking to jump back on the serious dating bandwagon just yet after breaking off his engagement to Ariana Grande in October 2018, with a source reportedly telling People that Davidson is "very much enjoying being single as he is focusing on himself," back in December 2018.

So there you have it! Let's all take a chill pill and let them do their thang. In the meantime, I'll be scrolling through Twitter, making the most of Antoni's awkward third-wheel jokes.