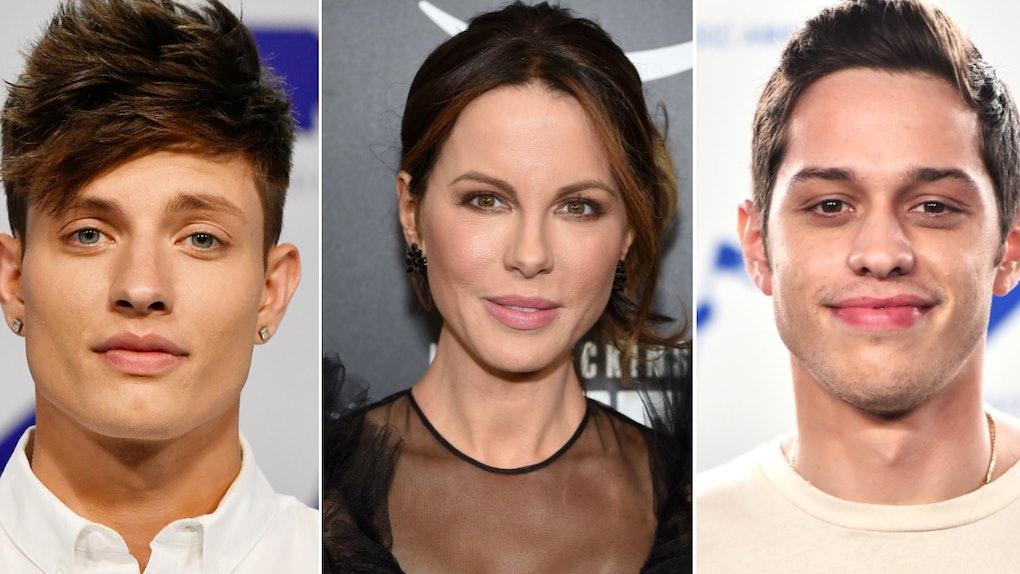 It’s no secret that Pete Davidson and Kate Beckinsale are reportedly dating. The two have been linked to each other numerous times since they met at the Golden Globes back in January 2019 and their relationship has only blossomed since then. This new connection between them has sparked lots of media interest and even Beckinsale’s ex Matt Rife has something to say about it, but it’s not exactly positive. Matt Rife's advice to Pete Davidson about dating Kate Beckinsale is pretty foreboding, but definitely gets the message across about his thoughts on the relationship. Elite Daily reached out previously to Beckinsale and Davidson's teams for comment on their relationship, but did not hear back by the time of publication.

TMZ caught up with Rife at the Laugh Factory in California and asked him if he had any advice for Davidson now that he’s reportedly dating Beckinsale.

“Advice for Pete? Man to man … run,” Rife told TMZ on Monday, March 4. “Enjoy it while you can. I hope they’re both happy. I hope that it can build to where it’s an established, good relationship. I don’t know. I don’t know what to tell you. I haven’t spoken to her in a while. I haven’t spoken to Pete in about the same amount of time, if not longer.” Elite Daily reached out to Beckinsale's team for comment on Rife's interview, but did not hear back by the time of publication.

At one point in the interview, Rife explained that he dated Beckinsale for about a year and it wasn’t as easy as people may think. At least, for him.

“We dated for a year… it was complicated. For sure. A lot of ups and downs. But she’s moved on,” Rife said.

As for Beckinsale’s new dalliance with Davidson, Rife just wants everyone to be happy.

“I wish them both the best. I hope they’re happy,” he said. “I don’t really have any solid advice. Just be careful.”

Well, it looks like Rife isn’t terribly keen on giving dating advice to Davidson. He seems to have stumbled on what he wanted to say to TMZ, but in the end, he offered his best wishes, which is about all anyone can do.

As for Beckinsale and Davidson, things seem to be heating up between them. The two stars were caught kissing during a New York Rangers game at Madison Square Garden on Sunday, March 3. So, I think it’s safe to say they’re into each other, for sure!

A March 5 report from E! News only emphasized how much Beckinsale is into Davidson. A source close to the situation revealed to E! that although they seem like an unlikely pair, they’re actually perfect for one another.

"He always has her laughing and that's a good feeling to have," the source said before adding, "They talk a lot and never run out of things to say." There’s more to it than laughter and long talks, though. There’s excitement in the relationship, too, according to E! News’ source. Elite Daily reached out previously to Davidson and Beckinsale's teams for comment on the report, but did not hear back by the time of publication.

"Kate's very into Pete," the source said. "You wouldn't necessarily put them together, but it's working for now. She's excited about getting to know him and hoping to spend more time with him."

So, regardless of what Beckinsale’s ex-boyfriend thinks about all this, all signs point to Beckinsale and Davidson having a great time together.

More like this
Did Pete Davidson Confirm He's Dating Phoebe Dynevor? Here's Why Fans Think So
By Corinne Sullivan
Are Olivia Lux & Utica Dating After 'Drag Race'? Olivia Gave An Update
By Dylan Kickham
Are Demi Lovato & Noah Cyrus Dating? They're Reportedly "Hanging Out"
By Joyann Jeffrey
Stay up to date