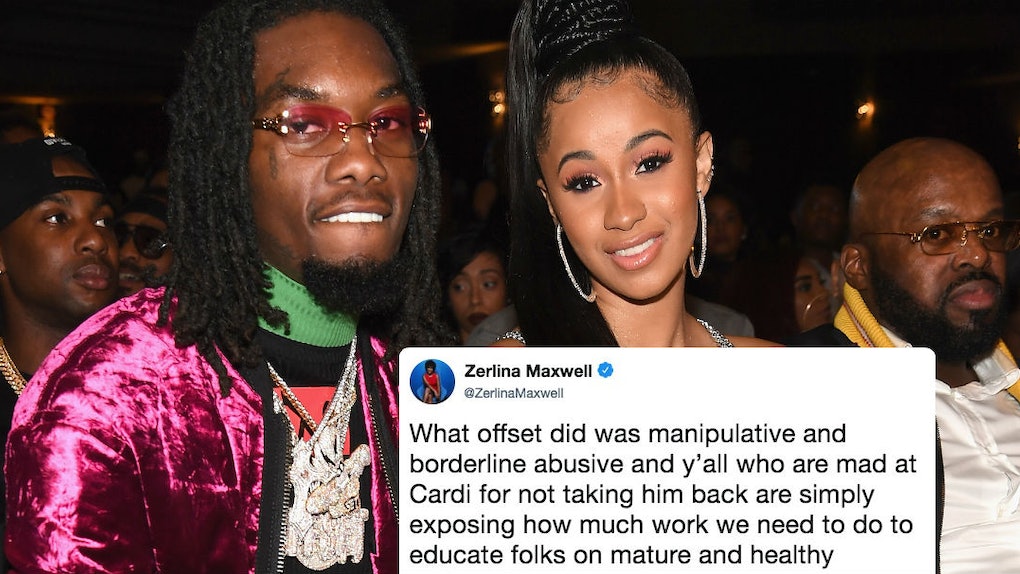 Offset made a bold move trying to get Cardi B to take him back this weekend, and the internet really didn't like it. During Cardi B's performance at the Rolling Loud Festival in Los Angeles on Saturday, Dec. 15, Offset came on stage with bouquets of flowers that spelled out "Take me back Cardi," quite literally begging the rapper to get back together with him. Cardi looked so exhausted in the video and made him leave the stage so she could keep on performing. And now, Offset's comments about Crashing Cardi B's concert shed a little light on why he thought the grand gesture would be a good idea.

On Sunday, Dec. 16, Offset tweeted about all of the outcry following his interrupting Cardi onstage. The critiques are pretty fair considering he did the equivalent of walking in on a work meeting unannounced and uninvited, but Cardi (who has every right to lose it on him for this stunt) has been goddamn graceful in her public response to Offset's antics. To make matters even more annoying, Cardi B was Rolling Loud's first-ever female headliner, so not only did he interrupt the rapper at work, but he also interrupted her during a landmark performance. Now he's trying to explain his thought process behind it.

"All of my wrongs have been made public," he tweeted, "I figure it’s only right that my apologies are made public too. A n**** was just trying .....thank god I ain’t got no balloons sheeesh."

Many people on Twitter see his stunt as a manipulative move.

Offset's tweet after Rolling Loud strikes a similar tone to all of his comments online about his and Cardi's breakup and the public reaction surrounding it.

When Cardi announced on Dec. 5 that she and Offset had broken up, the rapper commented on her video saying "Y'all won," as if it was the internet that tore them apart and not his reported cheating.

Then, on Dec. 9, he tweeted "F*CK Y'ALL I MISS CARDI," apparently still thinking it was "y'all" (aka, the internet) keeping them apart and not, you know, his own actions.

And then, on his birthday on Dec. 14, the rapper posted a video to his Instagram directed at Cardi B saying that his only birthday wish was for her to take him back.

This time, he was asking her for forgiveness instead of placing the blame on the internet.

"I was partaking in activity that I shouldn't have been partaking in, and I apologize," he said. "You know what I'm saying? For breaking your heart, for breaking our promise, for breaking God's promise and being a selfish, messed up husband."

"I want to be able to spend the rest of my life with you," he said later in the video. "I apologize. I am sorry for what I have done to you. I didn't f*ck that girl, but I was entertaining her, you know what I'm saying? I apologize, and I love you, and I hope you forgive me. My birthday wish is just to have you back." Offset doesn't specify who he's referring to when he said "I didn't f*ck that girl" in the video, but it could be Instagram model Summer Bunni, who posted a video apologizing to Cardi for being involved with Offset while she was still pregnant with Kulture.

Luckily for him, Cardi B has been asking fans not to bash him online in response to his actions at Rolling Loud.

"Violating my baby father is not going to make me feel any better," she said in a video posted to her Instagram this weekend. (She's still wearing her Rolling Loud costume in the video, so it looks like this might've been taken backstage after her performance.)

In another video posted not long after the first, Cardi came to Offset's defense again (not in defense of his actions, which she did not look pleased with in the slightest while it was happening, but rather in defense of allowing her and her ex to works things out in private without him being bullied online). She cited Pete Davidson's recent post about online bullying at the hands of Ariana Grande fans as a reason not to trash Offset.

"I'm not saying I'm going to get back together with him, I just don't like that bashing online thing," she said in the video. "You saw how Pete Davidson was talking about like he don't even want to be on this earth because mad people be coming at him every single day. I wouldn't want my baby father to have that feeling."

To sum all of this up, Offset interrupting Cardi B's Rolling Loud performance was some straight-up selfish foolery on his part and he shouldn't have done it. End of story. But Cardi makes a fair point about the internet bashing.