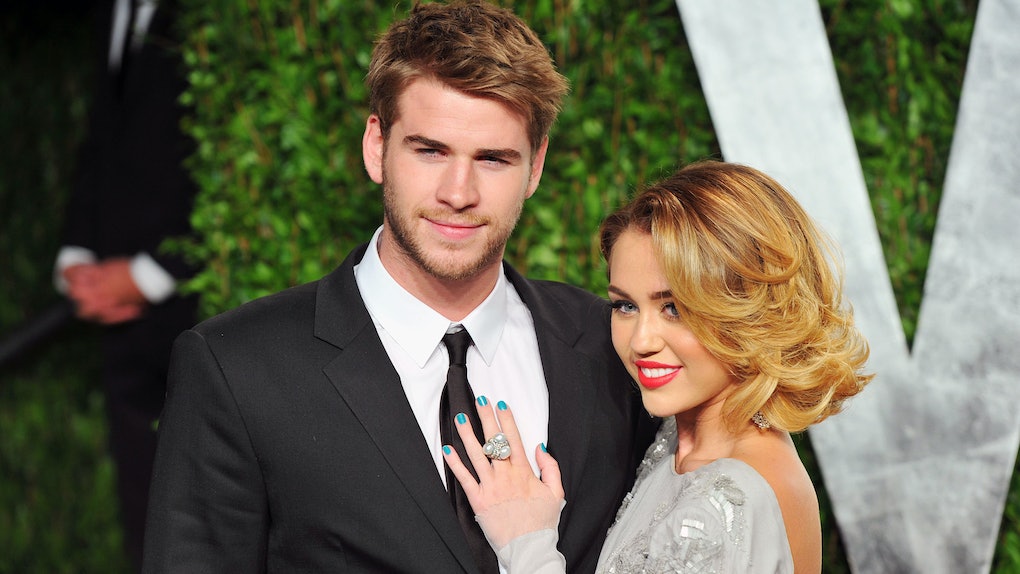 It may have taken a whole decade’s worth of on-again, off-again dating for Miley Cyrus and Liam Hemsworth to make a lifelong commitment together, but it’s safe to say that their happy ending was well worth the wait. Because truth be told, ever since they met the set of The Last Song and turned their on-screen fairytale into a real-life romance, we’ve been crossing our fingers that these two would end up together. And they’re a surprisingly relatable celeb couple, too. Which means that you may find that Miley Cyrus and Liam Hemsworth's relationship is just like yours — that is, if you’re lucky.

OK, so not everything about their relationship is relatable. After all, they did meet while starring in a Nicholas Sparks movie together (*sigh*), they made their debut as a couple on the red carpet, and Hemsworth proposed with a massive Neil Lane diamond ring. But that said, there’s something about the makeups, breakups, and many milestones in their relationship that feel so authentic and familiar. Perhaps it’s the fact that after all the ups and downs they’ve been through (and there have been many), they still found their way back together. Because as many of us know, true love isn’t always easy — sometimes, it takes a lot of effort and some serious self-growth to make it work.

Let's be real, here — Cyrus and Hemsworth give us new #relationshipgoals to aspire to. But if any of the following signs sound familiar, you may already have a love like theirs.

You fell hard and fast.

It didn’t take long for Cyrus and Hemsworth’s on-screen chemistry in The Last Song to translate to real life. In fact, right after shooting wrapped in the summer of 2009, the two were spotted having a heated makeout while saying their goodbyes at the Nashville airport. I mean, even Nicholas Sparks saw it coming. The author, whose book The Last Song was based on, told Entertainment Tonight: "I might tend to believe there was a little bit of magic involved.”

Hemsworth was very aware of the connection, too.

"From the first time we read [The Last Song script together], it was like I had known her before," he told Teen Vogue in the April 2010 issue.

Clearly, this was not a slow burn situation — the sparks were flying from the get-go. So, your relationship emulates theirs if you and bae had undeniably explosive chemistry from the start.

Let’s be clear, however. Just because it was basically love at first sight doesn’t mean this is a shallow, flash-in-the-pan kind of romance. Your love runs much deeper than infatuation — just like Cyrus and Hemsworth’s. Because bae just happens to be your bestie, too.

In a November 2009 interview, Cyrus called Hemsworth her “best friend.” In fact, she revealed in another interview with The Sun on Sunday that the duo maintained a private friendship even while they were broken up.

“I didn’t know [we’d get back together],” she told the news outlet. “But I had something in my heart, it never felt like it was really over. We kept a great friendship really private. It’s good for people to have that space to grow individually. Otherwise, when you’re with someone from 16 until 24, you grow into the same person.”

You’ve been through some sh*t.

There’s no denying that you and your boo have had to deal with some major hardships — but those experiences have only made your bond stronger. Because seeing what you can overcome together as a team has given you the confidence and peace of mind that this relationship can weather anything. And that just happens to be another factor that makes Cyrus and Hemsworth’s relationship stand out as well.

It’s not just that these stars have had to go through public breakups, cheating rumors, and other drama, either — they’ve also had to endure some intense personal tragedy. In her March 2019 cover interview for Vanity Fair, Cyrus shared that what inspired her and Hemsworth to finally get married was enduring the horrific Malibu wildfires together. In her memo for the magazine, she wrote: “What Liam and I went through together changed us,” adding that after they lost their home, the pair “found a new bond underneath all that rubble."

You support each other’s careers.

From the very beginning, you and bae have been each other’s biggest cheerleaders. When they get a promotion, you’re definitely taking them out to celebrate. When you land a new job after countless interviews, you know your partner’s going to make a big deal out of it. That level of boundless support is something that Cyrus and Hemsworth have always shown in their relationship as well.

Case in point: Back in 2017, Hemsworth posted Cyrus’ album art for Younger Now on Instagram, writing in the caption: “Check out this little hottie’s new album! She's got a bright future ahead ;) Get it while it's hot! #youngernow.” Boyfriend of the year, am I right? And when he couldn’t attend the February 2019 red carpet premiere of Isn’t It Romantic due to health reasons, Cyrus went to the event on his behalf.

“So proud of my hunky hubby @liamhemsworth & his newest movie #IsntItRomantic,” the pop star tweeted. “I am proud to represent him and his incredible work. So happy to see him shining in this comedy! He is the funniest person I know, and the world now gets to see the Liam I wake up to every day…. Luckiest.”

You’re tight with each other’s families.

It’s a beautiful thing — you’re super close to your partner’s family, and they’re in tight with yours, too. It’s not just that both families approve of your relationship — you’ve also formed an unusually close bond with each other’s loved ones that goes beyond that — just like Cyrus and Hemsworth.

For one, Billy Ray Cyrus (Miley’s dad) is clearly a big fan of Hemsworth. In 2011, he told E! Online he spoke out about his daughter’s boyfriend, saying, “He's got great character." He also gushed about Hemsworth’s acting chops, saying that he was going to “knock it out of the park” when it came to The Hunger Games. “He's just a really good guy,” he added in the interview. “I really like him a lot." Hemsworth even spent a couple weeks on tour with Billy Ray, and posted a video of a performance, writing: “My man @billyraycyrus ‘rocked the pants off it’ tonight at #cmafest #legend.”

That’s not all, either. In April 2016, Cyrus went so far as to get matching tats of a wave design with Elsa Pataky, Chris Hemsworth’s wife and her no sister-in-law.

You bring out each other’s silly sides.

You and you SO have a playful relationship — the kind where you’re not afraid to laugh at yourselves or make light of a situation. That’s precisely the kind of bond that Cyrus and Hemsworth have, too — and their many hilarious social media posts serve as the perfect proof.

For example, in December 2016, the duo got into the holiday spirit by posting a series of Instagram photos in some super tacky Christmas sweaters (Cyrus is even sporting string lights around her neck and an oversized light-up bow on her head). And then there was the LOL-worthy incident when Hemsworth trolled Cyrus so hard by belting out her hit song “Party in the U.S.A” as they strolled toward a private plane. In the videos, which he posted to his Instagram stories, Cyrus is seen cracking a smile and filming his antics before they break out giggling together.

Cyrus and Hemsworth may not have had an easy road to happily ever after, but they've certainly proven that their love is the kind that's built to last. Not only have they had to overcome a slew of obstacles together, but they've done so while maintaining a close friendship — oh, and a sense of humor, regardless of the circumstances.

So, you may not have starred in a movie together, written songs about each other, or dealt with wildfires together. You also may not have defiantly twerked on stage while coping with your breakup (looking at you, Miley). But if these signs ring a bell, then it's safe to say you've got the same kind of sought-after romance as these A-list lovebirds.

More like this
Are Jordyn Woods & Karl-Anthony Towns Engaged? Her Mom Cleared Things Up
By Joyann Jeffrey
Who Has Noah Cyrus Dated? Her Relationship History Is So Dramatic
By Corinne Sullivan
Travis Barker Tattooed Kourtney Kardashian's Name On His Chest
By Joyann Jeffrey
Stay up to date