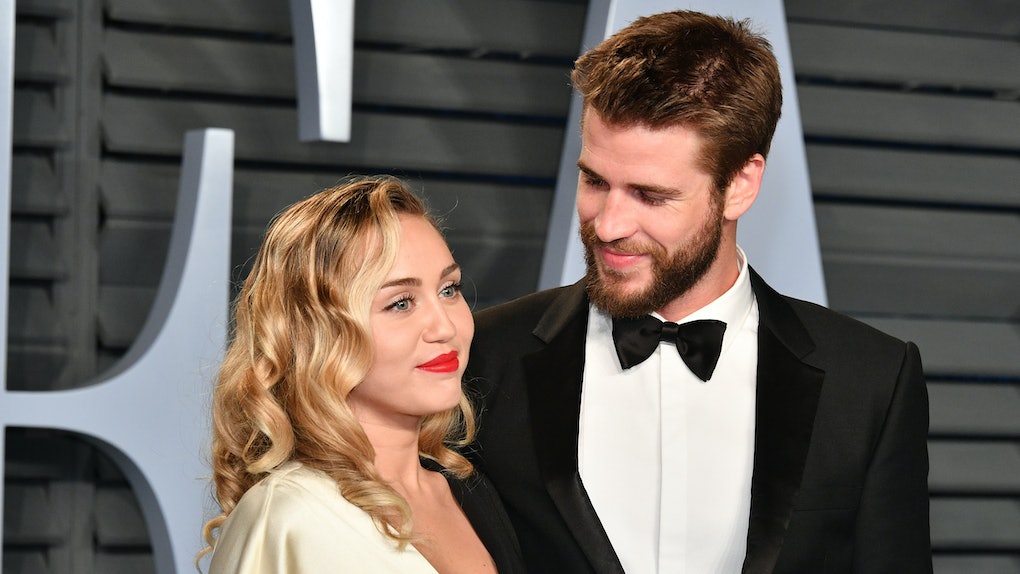 There are some celebrity couples who just belong together — despite their multiple breakups and makeups, their personal differences, or their busy schedules that keep them apart more often than they'd probably like. Miley Cyrus and Liam Hemsworth are one of those couples. Their love dates back 10 years (!!), and they've had plenty of bumps along the way — some bigger than others. But it seems like in more ways than one, the couple has persevered. Miley Cyrus and Liam Hemsworth's relationship timeline is proof that they've been to h*ll and back, but finally found their happiness in each other.

The two met on the set of their 2009 movie The Last Song, adapted from a Nicolas Sparks novel. Their relationship has certainly endured lots of ups and downs (probably more so than most relationships), but they always seem to find their way back to each other. They've reportedly broken up three times, they called off their engagement, they split for two years, and there's been no shortage of cheating rumors spread about both parties. But somehow, Miley and Liam made it through, and said "I do" on December 23, 2018. Here's to the newlyweds! And now, a look at how this resilient couple made it here.

In 2010, we were blessed with the release of The Last Song. (Thank you, Nicolas Sparks.) Miley and Liam played two teenagers who fell head over heels in love with each other. Luckily for us, it was the start of a truly beautiful, IRL love.

Miley and Liam made their first red carpet appearance at Elton John's AIDS Foundation Oscars' party, according to Cosmopolitan. Then they walked the red carpet together at the premiere of The Last Song.

After her third album Can't Be Tamed was released in 2010, Miley confessed to MTV that the songs on the album were about her hunky Australian. "All of them are about him in a way, but it's also about past relationships that you gotta get over and move on and just about freeing yourself from anything that you feel holds you back," she said in the interview. "Just let go of anything that's not going to help you in your future and ... always keep going forward."

A source told E! News the couple reportedly split because Miley wasn't ready for such a serious relationship at such a young age. "Miley has been super focused on her work," the source said. "Liam wanted more, but she's 17 and has other priorities right now. He's been a distraction."

September 2010: They reportedly get back together.

After Miley and Liam were spotted in Los Angeles together, a source reportedly confirmed to People that the two were, indeed, dating again.

November 2010: They break up for the second time.

This on-again, off-again couple broke our hearts when they reportedly split for the second time in 2010. A source told E! News that the two were simply "taking a break" while Miley was on her European tour and Liam was back in Australia.

April 2011: They get back together a few months later.

Our hearts didn't have to break for long! Several outlets reported that Miley and Liam got back together just a few months after their second breakup. This time the couple decided to take it slow. An insider reportedly told E! these two were "just enjoying each other's company."

Liam made our hearts sing with joy when he told the now-folded Details magazine just how ecstatic he was to have Miley by his side again. "What happened happened, and we've been together two and a half years," he told the publication. "She makes me really happy. When you start, you want to be professional, but when you're filming those scenes with someone and pretending to love them, you're not human if you don't feel something."

After this photo surfaced of Miley and Liam at Muhammad Ali's Celebrity Fight Night XVIII, fans began to speculate about a possible engagement between the beautiful couple because of the ring on Miley's ring finger. She quickly shut them down when she tweeted, "I'm not engaged. I've worn this same ring on this finger since November! People just wanna find something to tal[k] about! It's a topaz people!"

June 2012: They confirm their engagement.

But not long after her public denial of the engagement, Liam did actually propose. Miley told People, "I’m so happy to be engaged and look forward to a life of happiness with Liam."

March 2013: Speculation the engagement is off begins, but Miley confirms they are still engaged.

A month later, Miley was spotted without her engagement ring, causing fans to speculate if the engagement was off. Miley responded on Twitter by saying, "I am so sick of La. And sick of the lies that come with it. I didn't call off my wedding. Taking a break from social media. #draining." A few days later, she tweeted this picture as proof she was still wearing her ring.

September 2013: The engagement is off... for real this time.

Miley unfollowed Liam on Twitter, and a few days later, both Liam and Miley's reps confirmed the couple's engagement was off. The day after, Liam was reportedly spotted kissing actress and singer Eiza Gonzalez, Insider reported. A source told E! the breakup was Miley's decision because she believed her fiancé had been "less than faithful to her." In her first performance after the split, Miley broke down while singing Wrecking Ball, a song reportedly about Liam.

A year after their split, Miley reportedly started dating Patrick Schwarzenegger. The couple was photographed at a University of Southern California football game. They reportedly dated for a few months but broke up in April. In March, Schwarzenegger was photographed cozying up with someone else during his spring break, but later took to Twitter to say the woman pictured was "one of my best friends girlfriend," and that he would "NEVER do anything against my GF..."

Miley had reportedly flagged this big, beautiful pup for Liam when he returned from his Mockingjay Part 2 premieres abroad, Us Weekly reported. "The dog is super gentle and sweet and took right to Liam, despite being afraid of men in the past," Wylder's Holistic Pet Center told Us Weekly.

January 2016: The engagement is back on!

If Miley and Liam were trying to keep their not-so-new relationship a secret, the people of Instagram had something else in mind. Pictures surfaced of the couple spending time with Liam's family in Australia in January 2016, and a source confirmed to People their engagement was back on. "Miley is beyond happy to be engaged to Liam again," the source told the publication. "It might seem sudden, but they have been very close for the past few months."

While a source close to the couple told People Miley and Liam were engaged once again, neither one of them confirmed it until months later. Miley went on The Ellen DeGeneres Show and told the world they were, in fact, engaged for the second time.

May 2017: Miley announces her release of "Malibu."

In her Billboard cover story, Miley told the world she was going to release her new song, a love song about Liam she wrote on her way to the set of The Voice. "They’re going to talk about me if I come out of a restaurant with Liam. So why not put the power back in my relationship and say, 'This is how I feel'?" she said in the interview. She also admitted she was going through a major life change when the couple broke off their engagement four years earlier. "And changing with someone else not changing like that is too hard. Suddenly you’re like, 'I don’t recognize you anymore,'" she told Billboard. They had to "refall for each other."

Though their relationship was very much back on, Liam and Miley mostly stayed out of the spotlight when they got back together. They weren't photographed at public events, just the occasional Instagram posts and stories. So, it was a nice surprise when the couple walked the red carpet together at the premiere of Thor: Ragnarok, in support of Liam's brother, Chris Hemsworth.

During Thanksgiving weekend, Miley shared a picture of herself on Instagram with what looked like a baby bump with the hashtag #VeganTurkeyBaby, which caused fans to freak out over the possibility of a Miley-Liam baby. That same day, Miley responded to the speculation on her Instagram story, writing "Not pregnant just eating a sh*t ton of tofurkey. Rude!!!!"

November 2018: The couple's house burns down in the California fires.

In November 2018, wildfires ravaged through numerous homes in California— Miley and Liam's being one of them. Liam posted about it on his Instagram, showing all that was left of their home was the word "Love."

On The Howard Stern Show a month later, Miley revealed that Liam singlehandedly saved their four horses, two pigs, seven dogs, and three cats from the fires. She said she repaid him very well. (If you catch my drift.)

After a rollercoaster-filled 10 years, Miley and Liam finally tied the knot on Dec. 23, 2018 at the couple's home in Tennessee. They were surrounded by loved ones in an incredibly intimate wedding ceremony, filled with sweet, sweet moments (read: the photo above, this video of the newlyweds dancing together, and this gorgeous picture Miley took with her parents).

I honestly could not be happier for Miley and Liam. Now, if you'll excuse me, I'll have The Last Song and "When I Look At You" on repeat until further notice.