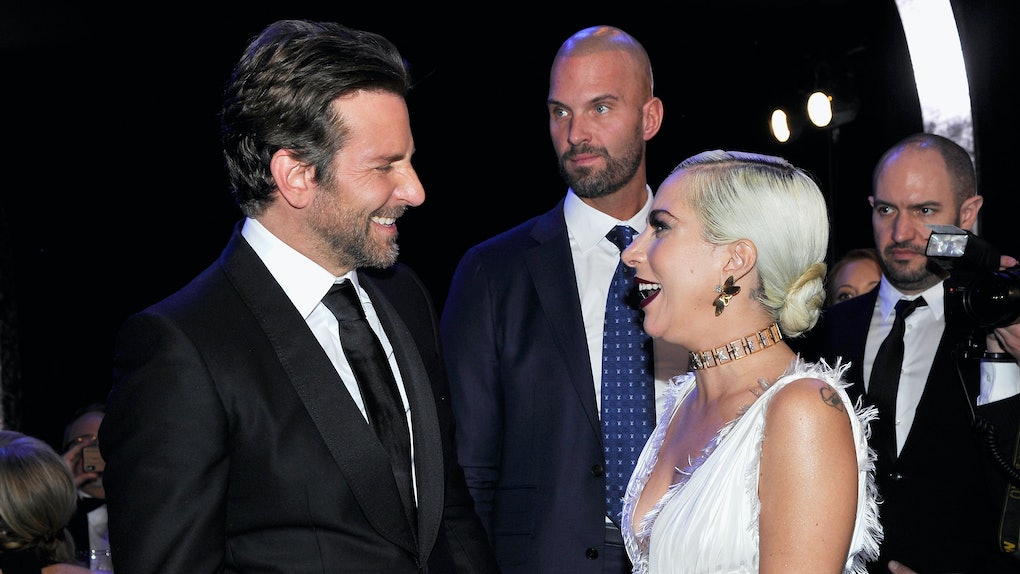 This stays between you and me, but prior to seeing A Star Is Born, I never would have thought Bradley Cooper and Lady Gaga would have such strong, authentic chemistry. However, obviously, like the rest of the world, I ended up watching the movie and immediately fell head-over-heels in love with the two of them. The film's co-stars clearly get along like two peas in a pod, and if you saw how Lady Gaga and Bradley Cooper presented at the 2019 SAG Awards, you would know exactly what I'm referring to. It was everything I ever wanted.

The Screen Actors Guild (SAG) Awards were presented on Sunday, Jan. 27, 2019, and let me tell you, they most definitely did not disappoint. In addition to the fact that Megan Mullally hosted (because Will And Grace is everything), Bradley Cooper and Lady Gaga ended up presenting a clip of their film together, alongside Sam Elliott and Anthony Ramos. The film was nominated for Outstanding Performance by a Cast in a Motion Picture, spoiler alert: Black Panther took home the award. Regardless of who won, there's no denying that Cooper and Gaga's presentation was fantastic.

The two esteemed actors got up on stage to introduce the film, and Cooper had some wildly deep sentiments. He said, "For me, this was more than a film. It created a family."

Gaga had similarly nostalgic sentiments, saying, "At it’s core, it’s about love. The discovery of it, and the loss of it, which is the thing that makes us all feel so alive." My heart literally exploded, and I highly recommend re-watching the awards solely for their presentation.

The night before the SAG Awards was presented on Saturday, Jan. 26, Lady Gaga and Bradley Cooper pulled a fast one on Gaga's fans by unexpectedly performing a live "Shallow" duet during the singer's "Enigma" show in Las Vegas. Gaga invited a "special guest" to come up from the crowd who just so happened to be Cooper, and the two of them essentially transformed into Jack and Ally at the drop of a hat. It was so beautiful, and if you weren't at the concert in-person, make sure to watch @GagaDaily's YouTube video recording of their performance, below.

OK for real, though, how awesome was that? Clearly, the singer-actor duo is extremely comfortable performing together, on and off the Star Is Born movie set. Their combined charisma is the greatest thing a gal could ask for, and honestly, all I want in this life is for Gaga and Cooper to perform together all day, every day. End of story.

I, personally, was absolutely thrilled when Gaga was nominated for the Outstanding Performance By A Female Actor in a Leading Role SAG. And unsurprisingly, my enthusiasm definitely was not unparalleled. Actresses Laverne Cox and Awkwafina presented the two nominations, and the "Crazy Rich Asians" actor ended up giving Gaga a "paws up" upon reading her name. Right after, Twitter went totally wild over the well-deserved nomination, and TBH, it was so heartwarming. I was beyond proud.

I am well aware of the fact that Gaga and Cooper were absolutely amazing in A Star Is Born. But if you watched the SAGs, you would know that the two of them are the epitome of best friendship. Aside from creating one of the greatest things that came out of 2018 together, they are the best friend pair that our nation quite literally needs right now. Try and name a more iconic duo than Gaga and Cooper. Seriously... I'll wait.

More like this
What Do BTS' "Film Out" Lyrics Mean In English? They're About A Past Relationship
By Michele Mendez
I Tried Singing While Running Like Miley Cyrus & OMG, My Lungs
By Rachel Varina
Taylor Swift's 'Fearless (Taylor's Version)' Lyric Changes Are Small, But Meaningful
By Michele Mendez
Stay up to date