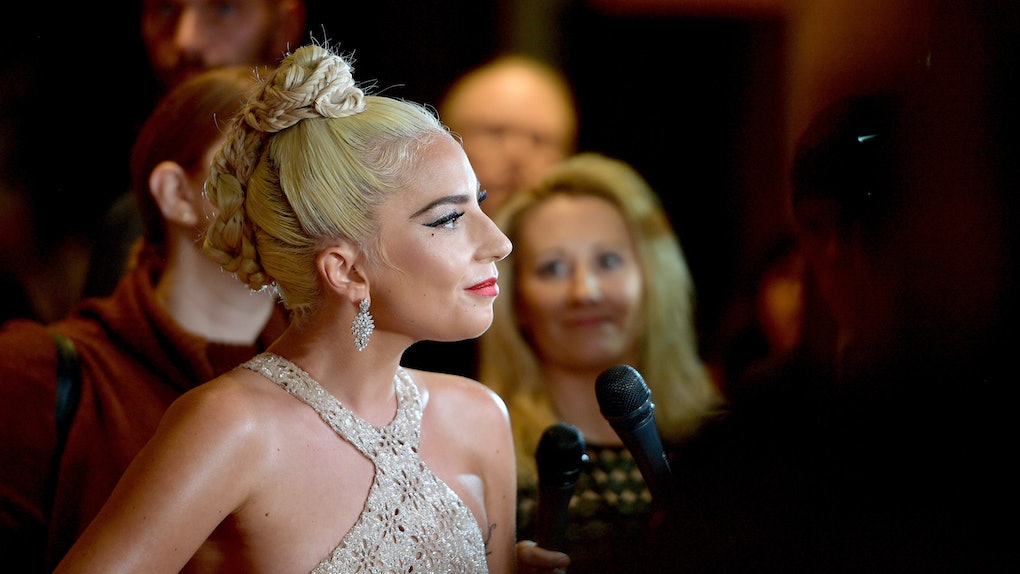 With the Screen Actors Guild (SAG) awards coming up, I'm sure you had a few strong opinions on who you wanted to win. Between Bohemian Rhapsody and Mary Poppins Returns, I personally thought it was an excellent year for musical movies. And if you also happen to be a major A Star Is Born fan, these tweets about Lady Gaga's SAG award nomination will literally make you burst in to song. I seriously can't stop dramatically singing "Shallow" at every waking moment.

I don't know about you, but I've been rooting for Lady Gaga to get nominated for every possible award since like... 2010. So, I'm absolutely thrilled that she snagged a nom for Outstanding Performance By A Female Actor in a Leading Role. I mean, really — Gaga is repping super talented ladies everywhere. She totally killed it reprising Barbara Streisand's OG role as Ally, and her singing was freaking amazing (as it always is). Awkwafina and Laverne Cox read the SAG nominations on Wednesday, Dec. 12, and when Gaga was called, Cox gave her a special "paws up," referring to the fact that Lady Gaga fans are called "Little Monsters" while she's the "Mama Monster." Check it out in the clip, below.

Anyway, as per usual, Twitter has an incredibly strong opinion on Lady Gaga's stellar nomination, and overall, everybody is all about it. I mean, I clearly can't get over it, and according to everyone's responses, neither can anyone else.

Gaga fans have had a lot to celebrate this year, as the singer-songwriter and actress was also nominated for a Grammy. Yep — "Shallow" was nominated for not one, not two or three, but four freaking Grammys, and as you probably would have imagined, Twitter is freaking the heck out. Nobody knows what to do, and honestly, I've never been more proud.

In case you weren't able to tell, Lady Gaga has hustled hard this year, and obviously, her hard work and determination has paid off significantly. The beloved "Poker Face" performer is totally killin' the game this year, between her Grammy, Golden Globe, and now her SAG awards nominations. I don't know about you, but my paws are waving in the air uncontrollably right now, because A Star Is Born is totally winning. TBH, if you need me, I'll be blasting the entire soundtrack in my room for the rest of today.