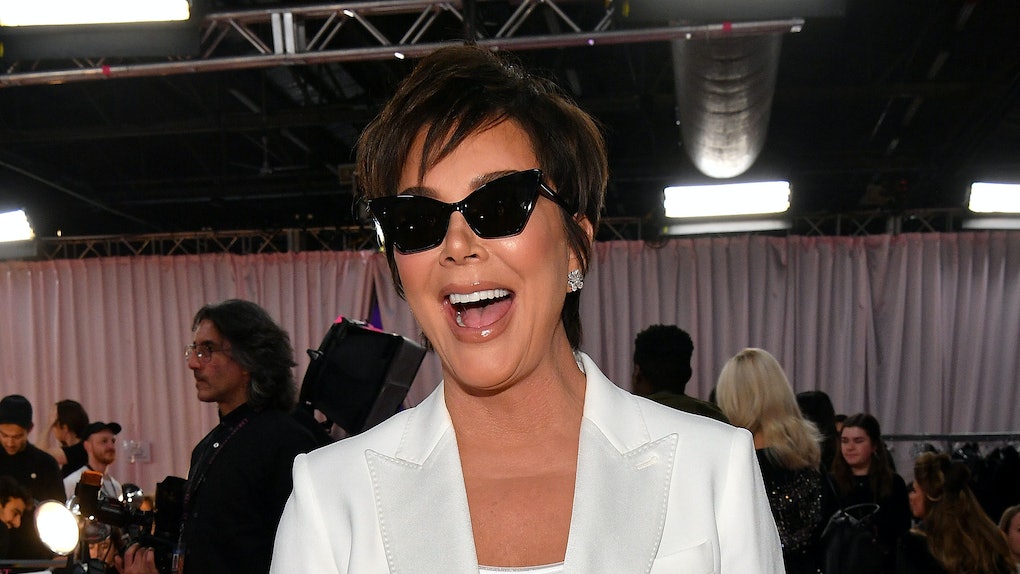 Long live Kris Jenner, and I mean that so seriously. I don't know what I'd do without this icon. Say what you want about Jenner and her momager tactics, but this woman's most-liked photos on Instagram show you just how important family really is to her. Kris Jenner's 2018 Best Nine is compiled of mostly family photos featuring her children and grandchildren, plus a little shout out to her cameo in Ariana Grande's "Thank U, Next" music video and a special visit to The Ellen Show. (But let's be real, Ari and Ellen are basically the same thing as family, so whatever.)

The fact is, all of the Kardashians had a wild year and Kris Jenner was there for all of it. In 2018, she welcomed three new baby granddaughters, watched Kendall walk at the 2018 Victoria Secret Fashion Show, weathered Tristan Thompson's cheating scandal, stood by Kanye West after his controversial TMZ Live moment, and supported all of her kids in their individual careers, personal lives, and dreams. Oh yeah, and she did all of that while wearing awesome sunglasses.

In Kris Jenner's Best Nine, fans will recognize one of Stormi's first baby photos, Thompson and Khloé's gender reveal, Kenny on the VSFS runway, an intimate double date-esque moment with Kylie Jenner, Travis Scott, and her boo Corey Gamble, plus a fun moment with granddaughter, Dream. And, honestly? I'm glad her "Thank U, Next" cameo made the cut. It's one of 2018's best songs and Jenner definitely helped level up the music video.

The next thing I like to do when stalking celebrities is a little bit of math to see what their average number of likes is per Instagram post. Based on Kris Jenner's numbers as of Dec. 20, she posted 614 pictures and received 142,268,581 likes in total. That's roughly 232,000 likes per picture. (For reference, family trailblazer Kim Kardashian racked up over one billion likes on 599 pictures. But who's counting, right?)

These numbers also mean Kris Jenner posted at least once a day (sometimes twice a day) for the whole year. I mean, I know she has a social media manager and everything, but still. Who has the time?! When you're literally keeping up with the Kardashians like she is, I suspect picking and choosing which photos to share and what captions to write can be a real headache. Props to her for getting anything up at all.

You might notice there is one thing noticeably missing in Jenner's Best Nine that is heavily featured in all of her children's collages — selfies.

There is not one selfie of Kris or her kids on her collage!

Anytime I write anything about Kris Jenner I usually try to do some research on her famous quotes or sayings. This time around, I found one from Keeping Up With the Kardashians that was particularly relevant in regard to Kris Jenner's selfie-less Best Nine. She once said: "You never do selfies with me. One day when I'm not here you're going to regret it."

Ugh, ain't that the truth?

More like this
Dan Levy's Quotes About The 'SNL' Note Tradition Clarify Who Really Started It
By Dylan Kickham
This 'Drag Race' Season 13, Episode 14 Clip Shows The Top 4 Getting SO Real
By Lexi Williams
Kourtney Kardashian & Travis Barker's "Pass The Phone" TikTok Is A Family Tell-All
By Abby Monteil
Stay up to date