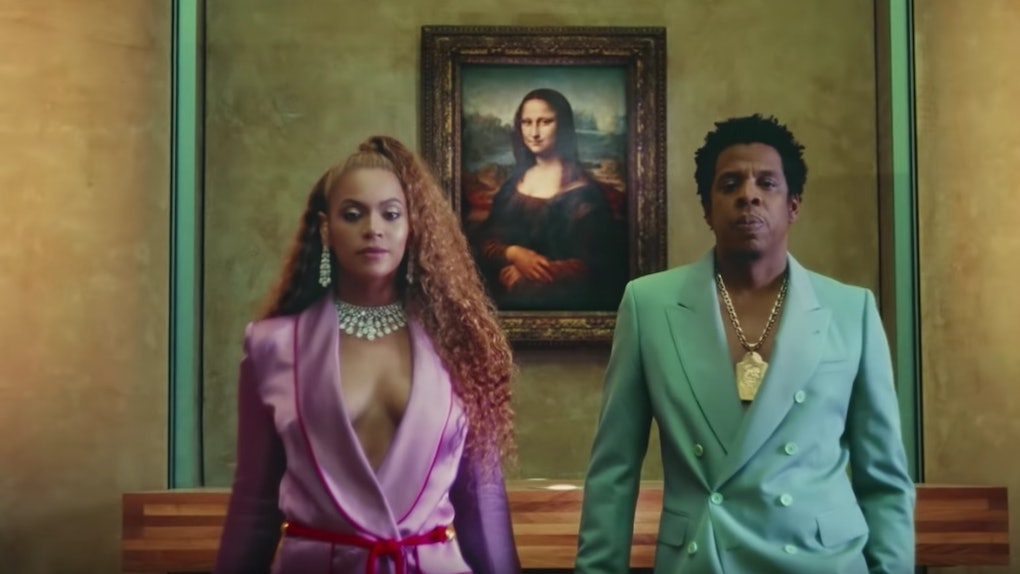 OK... well... That was a hell of a year. A lot went on in 2018. We saw the birth of three new Kardashian babies, a variety of celebrity engagements, marriages, and breakups, survived Arie's Bachelor season, and fortunately received some amazing new jams we can rock out to for years to come. Below you can find fan-favorite tunes, iconic beats, and important musical movements. Some of the songs have historical, political, or societal impact. Others are just plain fun. Either way, these 12 best new songs of 2018 are on my personal New Year's Eve playlist and can inspire yours, too.

Full disclaimer: These songs are in no particular order, so don't @ me. Even if you personally can't stand some of the bops here, you'll most likely recognize them all immediately. Sometimes, being the most popular does mean you're the "best," (though, maybe don't teach that to your kids).

Browse the hits below and turn the volume up. If Drake isn't your boy, maybe Cardi B is your girl. If all else fails, you can always scroll straight to Beyoncé and play her on repeat.

I am going to be the most real with you guys. I actually don't love this song. Haters, come at me. That said, the music video is a party and the universe is obviously obsessed with it, and who am I to argue with the universe? Grande won over fans all year long as she released tracks from her latest album Sweetener, and really brought it home with this smash.

What is any music list without a little Beyoncé and JAY-Z? The power couple dropped their collaboration track "APESH**T" in early 2018 and carried it all over the nation on their On the Run II tour. Listening to the track makes me feel like I can do anything and the music video is a real masterpiece. (Hot tip from me to you, though: Don't listen to it right before bed. You'll just hear them in your head all night shouting, "Have you ever seen a crowd going apesh*t?!" and you'll be like, "Guys, can we not right now?")

Sure, this song is popular, but have you seen the challenge yet? Drake unintentionally became part of a social media movement when comedian Shiggy danced to the tune outside of his car. The simple, yet hilarious, choreography quickly went viral, inspiring folks everywhere to recreate Shiggy's video alongside moving vehicles. Also, to this day, people are still trying to get to the bottom of who exactly Kiki is.

This is the feel-good song of the year, am I right? In fact, this music video landed itself in YouTube's top 100 most-viewed music videos. Coming in at number 55, the music video features a stoic Adam Levine singing to some of today's most iconic women. It's hard not to watch it without smiling.

2018 was Cardi B's year. For real. "I Like It" features Cardi B embracing her Latin roots alongside Puerto Rican rapper Bad Bunny and Colombian reggaeton icon J Balvin. The song also samples from the 1967 classic "I Like It Like That," originally recorded by Pete Rodriguez. Frankly, it's four minutes and 17 seconds of nonstop fun, and I can't wait to see what she has up her sleeve for 2019.

6. "Never Be The Same" by Camila Cabello

Camila Cabello's "Never Be The Same" landed her at number four on Rolling Stone's 50 Best Songs of 2018 list, and TBH, I get it. It's a sexy, provocative, dance hit and makes me feel like driving with the windows down and the volume up. It's only been about two years since Cabello broke away from Fifth Harmony and her solo career shows no signs of slowing.

OK. Yes. Duh. Hello. If you haven't caught the K-pop bug, I am so honored to be the one to pass it on to you. BTS, who is revered as an "unprecedented international phenomenon," shattered the stratosphere with their mega-hit "Idol." The song pairs a catchy chorus with energizing beats, and when you add in the group's iconic choreography, you get a full-on visceral experience.

Travis Scott is more than just Kylie Jenner's boyfriend. He's a world-renowned rapper touring the country like it's his literal job. (Well, it is, but you get it.) "Sicko Mode" bumps out on radio stations, pops up on random Spotify Weekly Discoveries, and definitely worked its way on to many gym playlists, including mine. I used to run on the treadmill listening to the Rent soundtrack. Now I run listening to Travis Scott rapping about Jamba Juice. Life is weird.

You probably know "All The Stars" because it's an incredible song, but it's possible you first heard it while watching the epic film, Black Panther. Kendrick Lamar and SZA offered their track to the award-winning film and also took home the MTV Video Music Award for Best Visual Effects. I highly recommend carving out four minutes to watch the video here to see why.

Oh, Post Malone. Post Malone, Post Malone, Post Malone. Even if you don't think you know the words to "Better Now," ya do. This song was played everywhere and has one of the most recognizable beats and choruses out there. Malone is known for his music just as much as he is for his face tattoos, and that's because both are special, of note, unique, etc. etc. You guys get the picture. This is the perfect song to play while you get ready for a night out of hi-jinx and adventure.

"Love Lies" is the combination of what Billboard calls "two of music's most promising young voices." Khalid, 20, and Normani, 22, wove a seductive melody over a sharp beat on this hit track. It is also Normani's debut solo moment since Fifth Harmony called it quits.

12. "This Is America" by Childish Gambino

Donald Glover rocked America when he dropped "This Is America" under his pseudonym, Childish Gambino. The song was, in a word, devoured by the nation. The lyrics and music video are packed with political, societal, and historical commentary on police brutality, gun violence, and what it means to be black in America. Many celebrities, public figures, and other people of note called Glover a "genius" and revere "This Is America" as nothing less than a masterpiece.

Thank you 2018 for all the memorable music you brought us. I can't wait to see what the new year brings! (More Cardi B, please.)