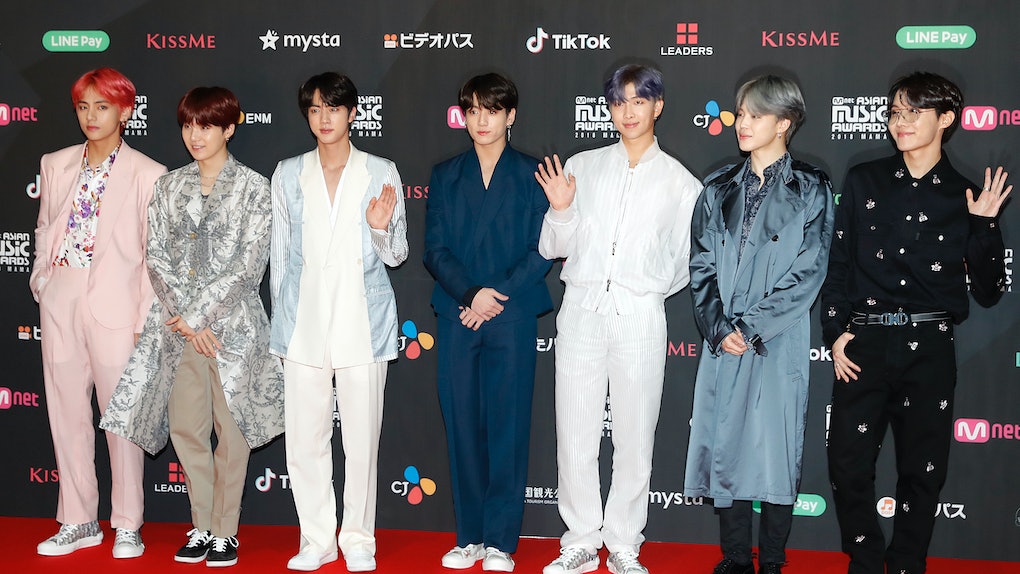 If the world ends before 2019, let it be with the BTS Love Yourself concert film trailer playing on repeat. The sensational K-pop group is bringing their first concert from their Love Yourself tour to a local movie theater near you and it is the ultimate gift for ARMYs everywhere. Essentially, it is a cinematic close-up at their Seoul, South Korea performance and gives viewers front row seats to a live BTS concert without having to leave the comfort of their own town (or country, for that matter).

Big Hit Entertainment announced the movie in mid-December on Twitter and ARMYs have been busy reserving their tickets ever since. Of course, fans didn't need the trailer to be motivated to buy tickets, but now that it's here I assume sales will skyrocket even more. The trailer is short, like, 30 seconds or so, but that's all you need to get hooked. There are brief glimpses into the impressive Seoul Olympic Stadium, shots of the guys performing their iconic choreography, and lots and lots of cheering. At the end, V, Jimin, Jin, Jungkook, RM, Suga, and J-Hope all stand in white t-shirts and blue jeans to take a simple, classic bow. Cue my goosebumps.

You're living for/dying for it, right?

The most important thing to note is that the movie is only playing one day everywhere. So, listen carefully.

On Saturday, Jan. 26, the concert film will be playing in theaters in 90 countries including the U.S. New locations are being added every day, so it's key to keep refreshing your browser to find the best location near you. You can pop onto LoveYourselfInSeoul.film or Fathom Events where you will be asked to type in your zip code or location to find the best spots for you and your friends, family, or strangers you meet on the street to hunker down with a big bag of popcorn and marvel at the unprecedented international phenomenon on screen!

Also, not that I want to start rumors here, but Big Hits Entertainment did eventually add more dates to BTS' last movie, Burn The Stage. So, it's not impossible that the Love Yourself film won't come around again. For my money, I'd log online right now and buy a big batch of tickets just to be safe and you can always hand them out as Christmas gifts or sell them to your niece and her tween friends. (I love being the "cool" aunt.)

Meanwhile, I'll be busy burning my battery with the Love Yourself trailer playing on repeat in the background, because hey, we all gotta get through life somehow. Right?

More like this
These Songs About Loving Yourself Need To Be On Your Playlist
By Michele Mendez
The 'Glee' Cast's Tribute To Naya Rivera At The 2021 GLAAD Media Awards Was So Moving
By Abby Monteil
Taylor Swift's 'Fearless (Taylor's Version)' Lyric Changes Are Small, But Meaningful
By Michele Mendez
Stay up to date