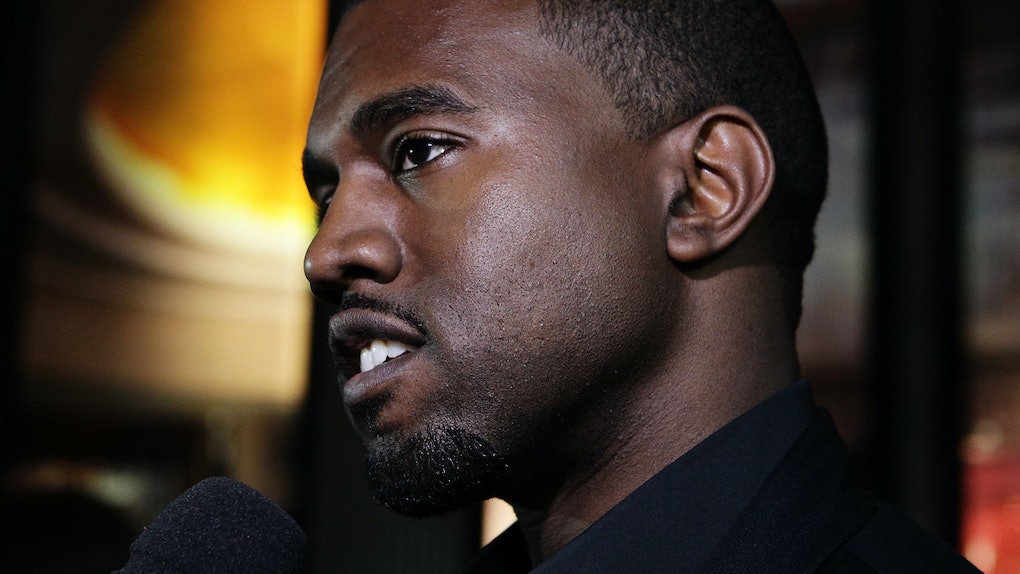 I've come to the conclusion that I literally can't with Kanye West. Due to my deep-rooted love for him and his music, I've tried to push my feelings aside amid all this recent controversy and get into his philosophical Twitter rants, or other unpopular views. But there's a new video of Kanye West discussing slavery at the TMZ office and it's probably more cringeworthy and problematic than anything he's said since returning to social media.

On May 1, West appeared on TMZ Live alongside host Harvey Levin to discuss a multitude of issues, but it was his comments on slavery that clearly stood out more than anything else. In the clip, the Graduation rapper said, "When you hear about slavery for 400 years. For 400 years?! That sounds like a choice." He continued, "Like, you was there for 400 years and it's all of y'all!?"

The video cuts to West asking if anyone in the newsroom thought he was "thinking free" and at that point, Van Lathan, an employee of TMZ, decided to chime in on West's comments. Van argued that he was "disappointed, appalled ... and unbelievably hurt" by the remarks — which is probably what many people are feeling after watching the clip. Check it out for yourself.

Yep, that's it. Muting the word "Kanye" on my Twitter.

Besides the fact that slavery and bondage is, by definition, not a choice, there's literally documented evidence of what happened to slaves who tried to escape from their owners. Has he heard of Nat Turner's rebellion? The risk of torture or execution if one tried to escape? The Fugitive Slave Acts? I just... Where's a history teacher when you need one??

Social media was not happy.

The bright side of all this drama is that there have at least been some people who have tried to school West amid his recent troll-like comments. Since making his return to Twitter on April 13, he's caused quite the stir, whether it be because of his proclamations of love for President Donald Trump or conservative commentator Candace Owens.

After expressing his adoration for Trump in a series of tweets on April 25 — which included West boasting about his signed Make America Great Again hat or calling the president his "brother" — John Legend called out the rapper via text message. In the text exchange (which West posted on Twitter), Legend asked his friend to "reconsider aligning" himself with Trump, largely because of West's influence. He also stated that he didn't want West's comments to be a part of his legacy, especially because he's the "greatest artist of our generation." But the Adidas designer shot down Legend's pleas, saying that "bringing up my fans or my legacy is a tactic based on fear used to manipulate my free thought."

Though many people have been offended or hurt by West's comments, when the rapper has an opinion, he's gonna share it — no matter what. Such was the case back in November 2016, after the presidential election, when he shockingly said he would have voted for Trump. Though he'd decided not to vote altogether, he admitted there were "a lot of things I actually liked about Trump’s campaign," including that "his approach was f*cking genius — because it worked."

A month later, in December 2016, the rapper met with Trump for a meeting, which he later elaborated on in a series of tweets.

"I wanted to meet with Trump today to discuss multicultural issues," Kanye tweeted. "These issues included bullying, supporting teachers, modernizing curriculums, and violence in Chicago ... I feel it is important to have a direct line of communication with our future President if we truly want change."

Communication is all well and good, but there are ways (and ways) to do it. And oh, maybe leave slavery out of things? Just a thought.

More like this
Why Don't I Have TikTok's "Celebrity" Shapeshifting Filter? It Depends On This 1 Thing
By Lara Walsh
These Tweets & Memes About The Purple iPhone 12 Are Seriously Hype Over The Hue
By Lara Walsh
The Best "Just Because You're Vaccinated" Memes With Iconic Pop Culture References
By Lara Walsh
Stay up to date