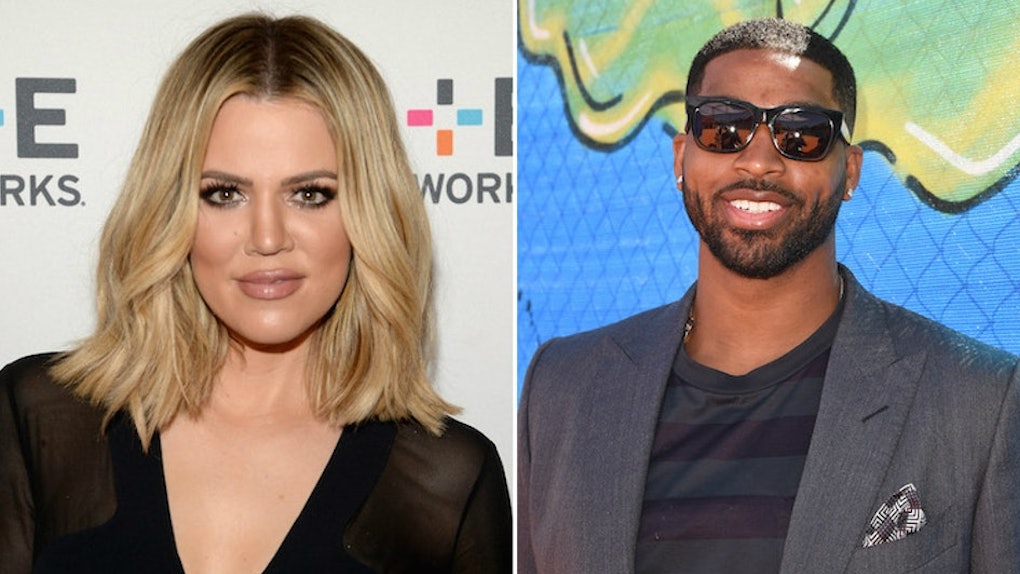 Khloe Kardashian & Tristan Thompson Partied Together, So They Could Be On Again

Thanks to hints from Kylie Jenner's birthday bash, you know that things might be "complicated" between Khloé Kardashian and Tristan Thompson right now. Even so, that doesn't mean that she's ready to throw in the towel just yet. Hours after Thompson was a no-show at Kylie Jenner's 21st birthday party on Aug. 9 sparked rumors that the new parents were on the rocks, the reality star flew to Toronto to be with her boyfriend. On Friday night, Khloé Kardashian and Tristan Thompson partied together, per People, and the steamy, PDA-filled snaps hint that their relationship is on-again.

On Friday, Aug. 10, KoKo shut down breakup rumors hard as she took to Snapchat to share a loved-up video of her and her boyfriend getting hot and heavy in a Toronto nightclub, according to People. In the pink-hued clip, the Keeping Up with the Kardashians personality can be seen getting a smooch from Thompson as they dance to a version of Bomba Estéreo’s “To My Love.”

Confused fans flooded her comments section with questions, because just one night earlier, Kardashian hinted that there might be trouble in paradise when she picked a green-colored cup to signify that "it's complicated" with Thompson at sister Kylie's stoplight-themed 21st birthday party. That, plus the fact that the Cavaliers star was not in attendance at the Kar-Jenner extravaganza and he was left out of the birthday girl's family mural, had fans believing that Khloé was having a hard time figuring out where she and Thompson stand at the moment. That is, until this steamy clip aired.

If the video is anything to go by, the reality star is definitely still in love with Thompson and attempting to mend their relationship after he reportedly cheated on her multiple times while she was pregnant. This is not the first loved-up Snap that the pair have posted since the alleged cheating scandal broke the internet in April, and something tells me it's definitely not the last.

Even so, it's understandable that it's going to take Khloé a little time to truly get past what happened and start trusting Thompson again. After all, this is a man she once said she wanted to marry, and they are co-parenting Baby True together. And while Khloé may not be putting the "taken" label on her relationship right now, it's clear that she's still very much trying to make things work with Thompson. Just look at them showing their kiss-y faces to the camera in her Friday night Snap. Elite Daily reached out to Kardashian's representative for a comment on her relationship status, but hasn't heard back at the time of publication.

That doesn't mean it's easy. In June, the new mom got candid and opened up via Twitter about the "enormous rebuilding this takes to even coexist" and how she's "proud of her strength."

For now, I predict we'll continue seeing new updates on the pair's are-they or-aren't-they relationship status until they figure things out. Personally, I'll admit that I am still very conflicted and having a hard time moving past Tristan Thompson's alleged cheating scandal — let's be real, Khloé is a queen, and she deserves to be treated as such. However, at the end of the day, I think we all just want her to be happy, even if it means accepting that Thompson might be around for the long haul.