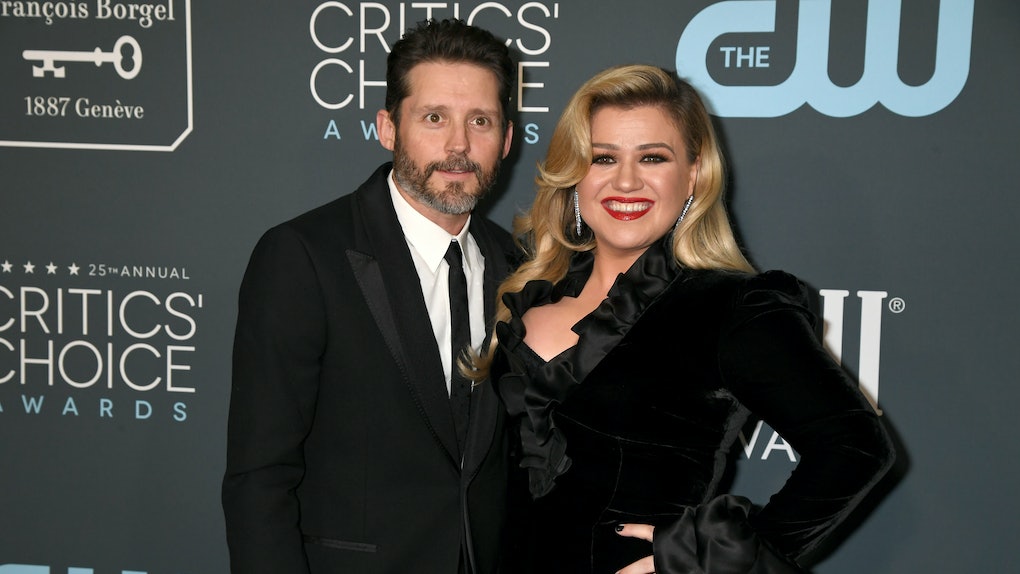 What doesn't kill you makes you stronger, but hearing that Kelly Clarkson and Brandon Blackstock's relationship timeline may have just reached its conclusion definitely has me feeling weak right now. From their sweet IG posts to their gushing quotes to their bonkers sex life, the singer and her talent manager hubby always appeared rock-solid, which is what makes the news that Kelly Clarkson reportedly filed for divorce from Brandon Blackstock so shocking. Of course, Miss Independent has yet to confirm the reported split herself, so I'm not ready to just walk away quite yet. (Elite Daily reached out to reps for both Clarkson and Blackstock and did not hear back in time for publication.)

Though the two first met back in 2006, it wasn't until nearly six years later that they finally started dating. Since their Oct. 2013 wedding, Clarkson and Blackstock have welcomed two children, River Rose and Remington Alexander, whom they've raised together alongside Blackstock's two children from his previous marriage, Savannah and Seth. Back in 2017, Clarkson even revealed that she's never felt "sexually attracted to anybody" before Blackstock. TBH, my life would suck without this couple in it, and now seems like the perfect time to revisit their fairytale romance.

Clarkson and Blackstock first met at a rehearsal for the 2006 Academy of Country Music Awards, which took place on May 23. At the time, Blackstock was the tour manager for Rascal Flatts (with whom Clarkson performed at the 2006 ACM Awards) and — unfortunately for Clarkson — married. Clarkson later confessed to People in 2013 that she was smitten from the start. "This guy walks by, making everybody laugh. I said, 'I'm gonna end up with him. I know it,'" she said.

By the time Clarkson and Blackstock were reunited in Feb. 2012, Blackstock was divorced from his first wife, Melissa Ashworth, and single again. At the 2012 Super Bowl, where Clarkson performed during the halftime show, Blackstock's father, Narvel (who is Clarkson's manager), reintroduced the two. During a Sept. 2019 interview with E! News, Clarkson said sparks started flying between her and Blackstock right away. "...I was like, 'I'm so into you, make out with me!'" she joked.

Less than a week later, Clarkson and Blackstock went on their first date. As Clarkson told Cosmopolitan in Jan. 2013, their first date was on Feb. 11, 2012, which was the same day Whitney Houston died. "I was like, 'This is a bad omen,'" she recalled.

They Got Engaged In December 2012

After just about 10 months of dating, Blackstock popped the question with a five-carat canary yellow diamond. Clarkson took to Twitter on Dec. 15, 2012 to share the news. "I'M ENGAGED!!!!!" she tweeted. "I wanted y'all to know!! Happiest night of my life last night! I am so lucky and am with the greatest man ever :)."

They Eloped In October 2013

Though Clarkson and Blackstock initially planned on having a big outdoor wedding in the backyard of their Nashville home, they became overwhelmed by the logistics and decided to have a low-key celebration instead. "Our whole life is a celebration," Clarkson explained to People in Aug. 2013, later adding, "We don't need another day where we throw a big party."

Instead, the couple tied the knot on Oct. 20, 2013 in a quiet ceremony at Blackberry Farm in Walland, Tennessee. "I'm officially Mrs. Blackstock :)," Clarkson tweeted the next day. "We got married yesterday at Blackberry Farms in TN, the most beautiful place ever!"

They Welcomed Their First Child In June 2014

A month after the wedding, Clarkson announced she and Blackstone were expecting their first child. "I'm pregnant!!!" Clarkson tweeted on Nov. 19, 2013. "Brandon and I are so excited! Best early Christmas present ever :)." Just about seven months later, she took to Twitter again to share the news of their daughter's birth. "Our baby girl River Rose Blackstock arrived on June 12th!" she wrote. "Thank you everyone for all of your well wishes! Brandon and I are on cloud 9!! :)."

They Welcomed Their Second Child In April 2016

On Aug. 19, 2015, while performing at the Staples Center in Los Angeles, Clarkson revealed to the audience she was expecting yet again. "I wasn't planning on announcing this," she teased the crowd, "but I'm totally pregnant." Her second child with Blackstone was born just about eight months later, and she shared the news of their son's arrival on Twitter. "Our little baby boy has arrived!!" she wrote. "Remington Alexander Blackstock was born 4/12/16 & he is healthy & we couldn't be happier or more in love!"

According to court documents obtained by Us Weekly, Clarkson reportedly filed for divorce on June 11, 2020, citing "irreconcilable differences." Neither Clarkson nor Blackstock has confirmed the news yet, but here's hoping these two do whatever is best for themselves and for their children.

More like this
Katie Thurston's Ex Joked About Her 'Bachelor' Entrance In His Stand-Up Act
By Corinne Sullivan
Skeet Ulrich Reportedly Feels “Cool” With His Split From Lucy Hale
By Lydia Wang
Are Jennifer Lopez & Ben Affleck Getting Back Together? A Reported Reunion Has Fans Buzzing
By Cianna Garrison
Stay up to date