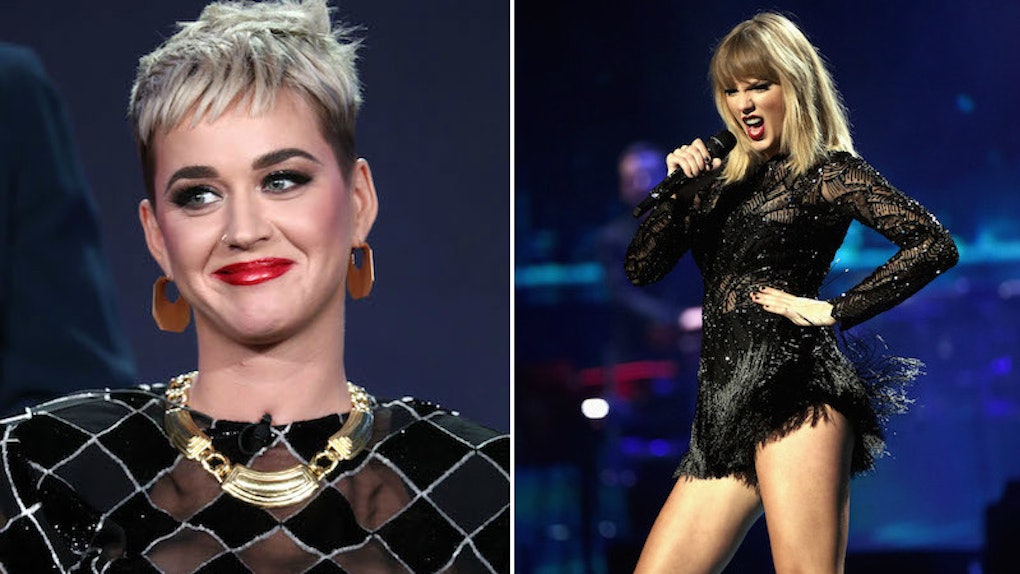 Looks like the Katy Perry-Taylor Swift feud may be back on, you guys! Although TBH, I'm not so sure it was ever really off. In case you're not totally up to speed on all the drama, I promise to catch you up in a sec. Because ever since Swift released her 1989 hit song "Bad Blood," rumors have been flying that T. Swizzle was referring to the "Firework" singer. Of course, Taylor has never confirmed that, saying only that the song was inspired by a pop star enemy. And since Katy Perry's tweets about Taylor Swift have been super brutal over the years, I'm pretty sure this whole frenemy situation is still alive and well.

Take what happened on American Idol on March 18. Perry is now a judge on the show, if you didn't know, and during the mass audition process, fellow judge Luke Bryan asked one of the hopefuls who he looked up to as an artist and, well, here's how the rest of that convo played out:

"I'm sorry for this Katy… Taylor Swift," he said.

"Oh, you don't have to be sorry!" Perry replied.

"I love Taylor Swift," he then responded.

Short, sweet, and to the point, Perry didn't even waste a breath.

So how did we get to this point? In a word: Twitter.

Grab some popcorn, 'cause here's what you missed!

It may be hard to imagine now, but from 2009 to 2012, it was all mad love for Perry and Swift. That's three whole years of friendship, and judging from their tweets, the pair were basically #friendgoals. First, Swift shared in July 2009 that she was watching Perry’s “Waking Up in Vegas” video and wanted to hang a poster of the singer on her wall. Too cute, right? That tweet has since been deleted, but Perry's adorable response to it has not:

Looks like the beginning of a beautiful friendship! In September of that same year, Perry even took Swift's side at the MTV VMAs during the whole Kanye West "Imma let you finish" debacle. Here's a clip of Kanye basically ruining T. Swizzle's big moment, in case you forgot how it all went down.

And here was Katy's #TeamTaylor response:

Kanye later apologized, and the two appeared to be okay — at least until 2015 when Kanye debuted his new song, "Famous," which featured some not-so-nice lyrics, seemingly directed at Swift. Kanye said he asked Swift for permission to use the lyrics. Swift said she didn't. And things have never been the same since.

Meanwhile, back in 2009, the lovefest between Perry and Swift was still going strong. Check out Swift's tweet about Perry’s epic birthday bash:

The two even performed together in April 2010, when Perry surprised fans by coming out on stage at the Staples Center in Los Angeles to sing a duet of her hit "Hot N Cold" during Swift's show.

So, where did it all go wrong? The bad blood apparently started flowing back in 2013, when a dancer named Lockhart Brownlie (who had toured with Perry for her California Dreams world tour in 2011) was interviewed for Australia’s The Examiner. During the interview, Brownlie admitted that he and two other dancers stopped working for Swift on her Red tour after Perry called and invited them to come join her on her Prism tour instead.

"I was with Taylor for the first six months [of the Red tour]," he explained. "It was a great experience and she’s a great person to work with, but then Katy contacted us. We weren’t really dancing in Taylor’s tour anyway, so I had got a little bored and I really wanted to do a promo tour."

So yeah, that happened. Then, in a 2014 interview with Billboard, fans thought Swift basically confirmed that her hit song "Bad Blood" was about Perry and the whole debacle. Of course, she didn't actually say Perry's name, but fans drew their own conclusions. Here's what she said:

She did something so horrible. I was like, 'Oh, we're just straight-up enemies.' And it wasn't even about a guy! It had to do with business. She basically tried to sabotage an entire arena tour. She tried to hire a bunch of people out from under me. And I'm surprisingly non-confrontational – you would not believe how much I hate conflict. So now I have to avoid her. It's awkward, and I don't like it.

Perry never responded publicly to Swift's report of the events. But the day after the article was published, Perry brought her A-game to Twitter by shooting back with a Mean Girls reference:

Whoa. Things only got worse from there. After Swift got herself into a Twitter war with Nicki Minaj over the VMA nominations in 2015, Perry used the opportunity to weigh in and throw some serious shade Swift's way.

And Minaj was apparently super grateful:

A year later, Perry got dragged into a different Twitter fight — this one between Swift and her ex Calvin Harris. In July 2016, shortly after the two broke up, the news got out that Swift had secretly co-written Harris' hit Rihanna collab "This Is What You Came For." Harris went on Twitter rant about how Swift leaked the credit in order to tear him down. "I know you're off tour and you need someone new to try and bury like Katy ETC but I'm not that guy, sorry," he wrote in a since-deleted tweet. "I won't allow it."

Perry responded with a subtweet that featured a gif of Hillary Clinton, because of course she did.

Then, in September 2016, when a fan asked Perry on Twitter if she would ever collaborate with Swift, the "Roar" singer responded this way:

Swift never responded. But in May 2017, Swift's girl squad member Ruby Rose rolled up to take a jab at Perry's album Witness with her own Mean Girls reference:

Wow, it's like she has ESPN or something. And while the Twitter war seems to have ended there — at least, for now — Perry and Swift have basically continued to throw shade at each other through their interviews and song lyrics. Is Perry's song "Swish Swish" a clapback to "Bad Blood"? Is "Reputation" actually about Perry? Sadly, we may never have the definitive answers, as both women have never commented on the rumored inspiration for both of those songs.

But both ARE currently thriving, so despite Perry's low-key dig on American Idol, I think it's time these two stop trying to make this whole feud thing happen and start getting along again, because that’s just, like, the rules of feminism.