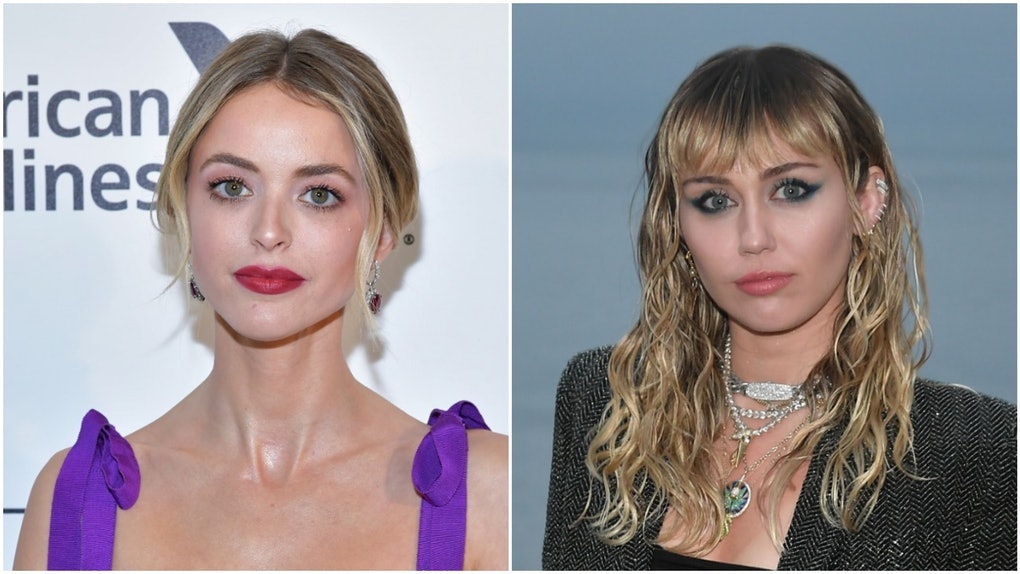 Ever since they engaged in a steamy makeout sesh while vacationing on Italy's Lake Como together, Miley Cyrus and Kaitlynn Carter seem to be getting closer by the day. The latest development: Kaitlynn Carter's "M" ring on her ring finger. Yes, on her left ring finger. Now I'm not suggesting that the placement of the ring is necessarily significant — she wears a lot of rings, after all — and I'm not saying that the "M" necessarily stands for Miley. But I'm also not not saying those things. (Elite Daily reached out to Carter's rep about the ring but didn't hear back in time for publication.)

On Sept. 11, pictures surfaced of the Cyrus and Carter dodging the paparazzi together while checking out of a New York City hotel. Cyrus was sporting her signature "wet hair" hair look and carrying a pooch, while Carter was rocking rings on nearly every finger — though it's that "M" ring that really piqued the paparazzi's interest. Considering that the two have recently moved in together and Carter was emoji-drooling over an Instagram pic of Cyrus just two days before photos of the ring surfaced, I think it's more likely that "M" stands for "Miley" than "Mom."

This isn't the first time that a ring worn on that finger has raised eyebrows — but hasn't necessarily indicated an engagement. Back in July, Cara Delevingne and Ashley Benson were spotted wearing matching rings while vacationing in Saint Tropez. Twitter, unsurprisingly, went into a tizzy with engagement speculation, though the notoriously private couple never confirmed the rumored engagement. I personally think those rings just signified that their relationship was getting serious, and I think Carter's ring is similarly just her way of expressing how committed she is to her new boo.

Carter and Cyrus' relationship had mixed reactions at the start, considering those pics of their Lake Como getaway surfaced the same day that Cyrus and Liam Hemsworth announced their separation (and just days after Carter and Brody Jenner parted ways). Fans were quick to place the blame on Cyrus for the separation, believing that her fun-loving lifestyle, her bisexuality, and her supposed infidelity caused their marriage to erode.

On Aug. 22, Cyrus took to Twitter to shut down those cheating rumors, making it clear that she and Carter didn't strike up a relationship until both had called it quits from their respective partners. In a lengthy and candid Twitter thread, Cyrus tweeted, "I can admit to a lot of things but I refuse to admit my marriage ended because of cheating," later adding, "BUT at this point I had to make a decision for myself to leave a previous life behind. I am the healthiest and happiest I've been in a long time." Live your truth, Miley!

Carter and Cyrus' relationship may be progressing at lightning speed, but is there anything wrong with two people who know what they want? As an insider close to Cyrus reportedly told People on Aug. 16, "Miley is very close with Kaitlynn. It’s romantic, but also a friendship. They are both going through similar stuff right now and are bonding over it." Whether that "M" ring is a promise ring, an engagement ring, or simply a pretty piece of jewelry, I don't really care — I'm just happy as long as those two are happy together.