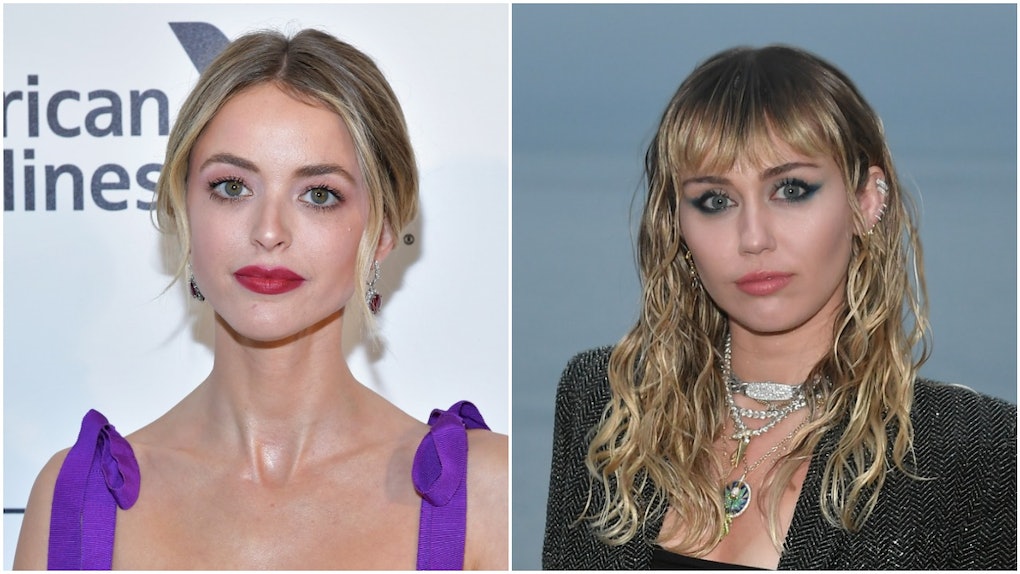 Kaitlynn Carter is really just putting it all out there y'all. She has no fear about sharing how she feels about her reported new gal Miley Cyrus. Honestly, Kaitlynn Carter's comment on Miley Cyrus' Instagram makes it look like the two are getting even closer.

On Sept. 9 Miley Cyrus decided to upload a few amazing photos of herself to the 'Gram. The singer was sporting her usual look as of late: black-on-black with "wet hair." But this Tom Ford ensemble had a little extra flair, as Cyrus topped it off with a big furry hat, shades, and a deep plunge blouse. She looked fire, and, apparently, Carter thought so, too.

The Hills: New Beginnings star commented with a super-flirty message, "dear god," accompanied by the drooling emoji. Yes, the one with its eyes closed! Of course, Comments By Celebs caught all the action and screenshot it for your viewing pleasure. Wow. It seems like things are seriously heating up between these two.

This spicy comment comes just days after Carter celebrated her 31st birthday on Sept. 4. She shared a number of birthday updates on her Insta Stories and regrammed birthday wishes from friends and family. I'd like to also point out that one of those regrams was from Brandi Cyrus, Miley's sister. Brandi wrote "HAPPY BIRTHDAY KAITLYNN !" alongside a picture of herself, Kaitlynn, and Cyrus chilling on a boat.

In the midst of those sweet messages, Carter included not one, not two, but three black-and-white photos of herself and Cyrus posing on a balcony. They were emoji-free, but I think it's safe to say they are very fond of each other. So much so, Carter and Cyrus have reportedly moved in together. According to People, "They live together and are very happy," a source close to Cyrus told the publication on Sept. 2. “Miley is doing great. She is moving on. She seems to have no regrets. She loves being with Kaitlynn." Elite Daily previously reached out to reps for both Cyrus and Carter for confirmation on the reported move and did not hear back in time for publication.

Now, let's rewind a second for anyone who is not up to speed as to why the couple's initial "hangouts" were (and still are) the talk of the town.

Well, it's because Carter and Cyrus seem to be moving full speed ahead with their reported relationship since splitting up with their respective exes in early August 2019. Carter and her partner of five years, Brody Jenner, called things off on Aug. 2, saying they "decided to amicably separate," and "they love and respect one another, and know that this is the best decision for their relationship moving forward."

Then, Carter and Cyrus were snapped seemingly sharing a kiss on Lake Como in Italy on Aug. 11. Elite Daily previously reached out to Cyrus and Carter's reps about the new photos, but did not hear back by the time of publication. Carter even attended the 2019 MTV Video Music Awards performance on Aug. 26 to be there for Cyrus when she performed her emotional breakup anthem "Slide Away" for the first time. Now, Carter is leaving flirty comments on Cyrus' photos and both women seem to be very happy. Which is what really matters, so wishing them the best.