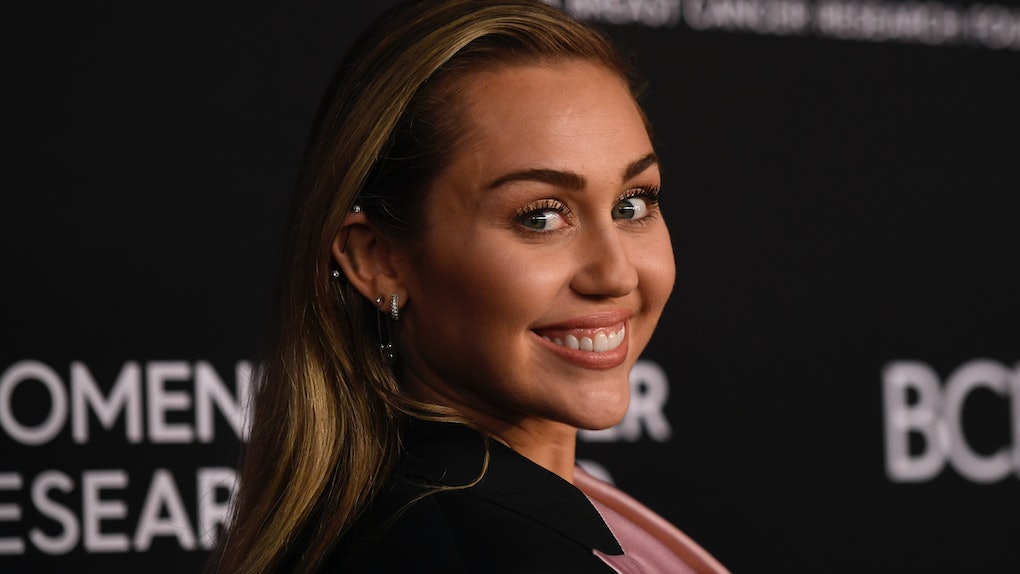 Ever since TMZ broke the news on Aug. 21 that Liam Hemsworth reportedly filed for divorce, fans of Miley Cyrus have been waiting for the pop star to break her uncharacteristic silence. Good news, guys — she finally has in a powerful Twitter thread telling her side of the story. Miley Cyrus' tweets denying she cheated on Liam Hemsworth are seriously important and will hopefully teach the haters a lesson about making snap judgments.

According to TMZ, Hemsworth filed legal documents in Los Angeles citing "irreconcilable differences," which tells me precisely nothing. But I can't help it, guys, I'm curious — especially since everyone seems eager to place the blame on Cyrus. The reason: Cyrus was spotted vacationing with (and canoodling with) Brody Jenner's ex-wife, Kaitlynn Carter, on Aug. 10, the same day that her split from Hemsworth went public.

A source told E! Online that Cyrus simply wants to "put out music and be back in the game touring and performing," but now Cyrus herself is ready to stand up against who believe her infidelity and lifestyle are the reasons for the split. She began the thread by admitting that being a public figure makes having a private life difficult.

Cyrus then continued on to say that, despite being a public figure, she hasn't always maintained a squeaky-clean image, and she realizes that. "It is no secret that I was into partying in my teens and early 20’s," she said. "I have not only smoked, but advocated for weed, I’ve experimented with drugs, my biggest song to date is about dancing on molly and snorting lines in the bathroom." (And here I was thinking this whole time that the lyric was "Dancing with Miley," not "Dancing with molly." LOL at my naïveté.)

In the spirit of coming clean, Cyrus mentioned other ways in which she has caused controversy. "I f*cked up and cheated in relationships when I was young," she admitted. "I lost a massive Walmart deal at 17 for ripping a bong. I got kicked off hotel Transylvania for buying Liam a penis cake for his birthday and licking it. I swung on a wrecking ball naked. There are probably more nudes of me on the internet than maybe any woman in history."

Then Cyrus switches from self-condemnation to self-defense. "But the truth is, once Liam & I reconciled, I meant it, & I was committed," she says. "There are NO secrets to uncover here. I’ve learned from every experience in my life. I’m not perfect, I don’t want to be, it’s boring. I’ve grown up in front of you, but the bottom line is, I HAVE GROWN UP." I think very few people can argue with that.

Finally, Cyrus got very real, directly addressing the rumors that her cheating and partying ways led to the end of her marriage.

And she concluded with this awesome mic-drop moment: "I am proud to say, I am simply in a different place from where i was when I was a younger." Live your truth, Miley. I'm proud of you, and I hope that your words change the minds of at least a few of the people determined to point fingers and put you down.