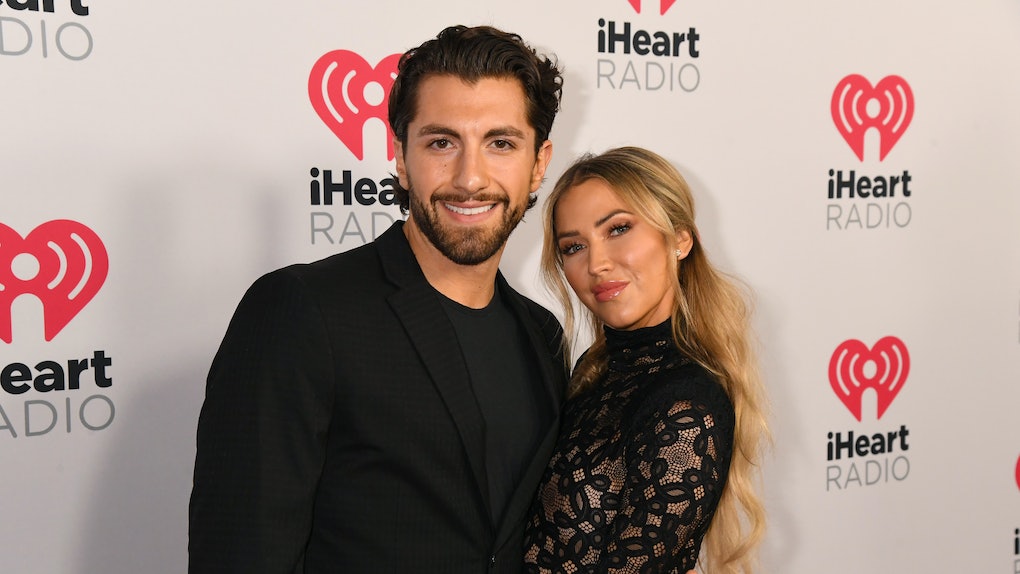 For those who have been following Jason Tartick and Kaitlyn Bristowe’s relationship, this may come as a surprise — but as it turns out, achieving the epitome of relationship goals does not mean they’re *perfect.* In fact, just like any other couple, they have their problems. (Shocking, I know.) They elaborated on those in a new interview for the podcast Whine Down, and fam — Kaitlyn Bristowe and Jason Tartick's relationship issues are oh so relatable.

Apparently, one of their main issues involves conflicting opinions on raising their two fur babies, Ramen and Pinot — which they believe may signal some differences when it comes to parenting children someday.

"I like things a certain way and I feel like, even with dogs, I have this motherly instinct and I feel like sometimes Jason can't do things right, where I'm like, ‘How do you not know to do that?'" Bristowe told co-hosts Jana Kramer and Mike Caussin.

She also notes that she’s going to “need to be aware of how hard she is” on him if and when they eventually have kids because she has those maternal instincts to rely on and therefore, doesn’t always trust his way of doing things.

Tartick further explained that he’s more “by the book.” In other words, he prefers to do research on something to make a decision rather than rely on gut instincts (seems like she’s an Intuitive Feeler and he’s a Sensing Thinker, but I’ll spare you my Myers-Briggs nerdy digression).

"We get into a lot of arguments of, like, what is right or wrong for the dogs," he added.

Not only that, but Tartick also admitted that they have a fundamental difference in personality that sometimes can cause some challenges in their relationship.

"I think very logically and rationally and I'm not extremely emotional—and it's okay to be emotional—the big thing is that I've learned to cope with things really well," he said in the interview. "So, something happens and I'm like, ‘OK, I'm gonna deal with my feelings. I'm gonna cope and find a way to solve,' right? Kaitlyn doesn't cope very well and that drives me crazy."

In other words, it sounds like Bristowe is more emotionally-driven in a stressful situation (#ItMe), whereas Tartick goes into “fix-it” mode. The important thing to note here is that as Tartick points out, there’s no right or wrong way to be. In fact, sometimes that balance is necessary, because if both people are reacting the same way, that may actually escalate the situation.

What’s so promising about Tartick and Bristowe’s commentary on their relationship is not only that they can clearly communicate all the things they’re working on, but also that they can honestly say they’ve been able to find common ground.

“We do find ways to compromise,” said Tartick. “Because if you can't compromise, it's not gonna work. So, it's gotta be give and take and you pick and choose your battles — that's what I've learned at least."

Better yet, Bristowe claims this relationship has represented an immensely positive change for her because she finally feels comfortable having those disagreements — which is so key.

“It's so wild how different I am because I feel safe," she explained. "I've never felt safe in a relationship until this relationship so, I deal with conflict differently and insecurities differently because I don't question him leaving me or, like, get all insecure.”

Still sounds like #couplegoals to me. And despite the fact that they may not see eye to eye on everything, Bristowe previously told Elite Daily that those differences are actually what makes them a good fit.

“I think we’re also very different in a lot of ways, where I’m maybe a little bit of a hot mess, and a scatterbrain, and [Jason is] organized,” she said. “Where I struggle, he can build me up, and vice versa.”

Bristowe also previously admitted that whereas he’s a financial “genius,” she’s more of a “creative mind” — but the important thing is that they both cheer each other on in all of their endeavors.

“We just make such a good team that supports each other,” she told Elite Daily.

They may not be perfect — but TBH, their level of candid self-reflection is one of the hallmarks of a relationship built to last. Because if anything, Bristowe and Tartick openly and honestly sharing their issues not only demonstrates their maturity as a couple, but also their ability to identify opportunities for growth and improvement. Bravo, you two.

More like this
Katie Thurston's Ex Joked About Her 'Bachelor' Entrance In His Stand-Up Act
By Corinne Sullivan
Are Clare Crawley & Dale Moss Engaged Again? This Update Has Fans Convinced
By Candice Jalili
Matt James' Update On His Relationship With Rachael Kirkconnell Is Surprising
By Candice Jalili
Stay up to date