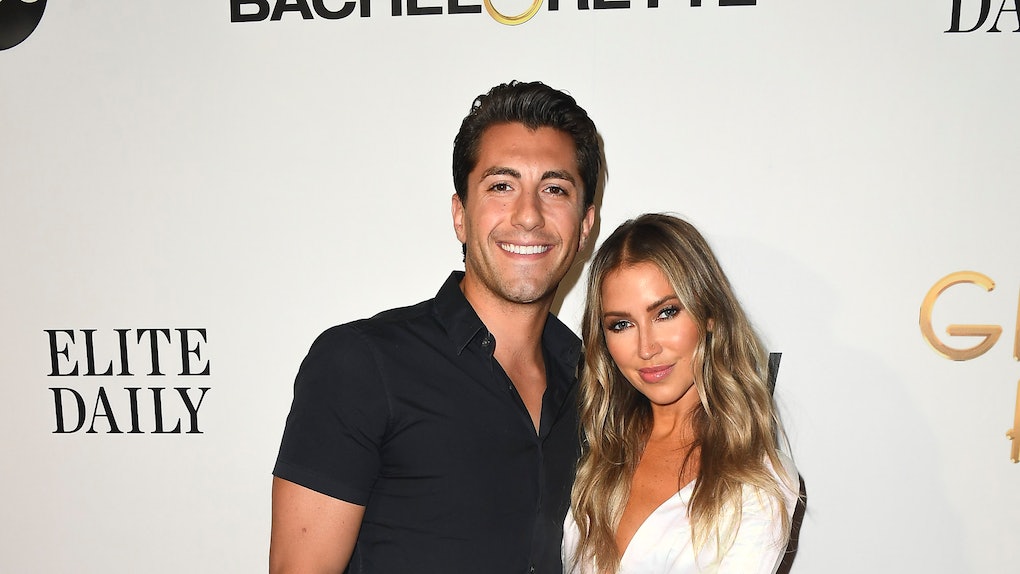 It’s been six months since Kaitlyn Bristowe and Jason Tartick revealed their relationship, and TBH, I haven’t felt this optimistic about a Bachelor Nation couple in years. Even though the road to their relationship wasn’t the traditional one, in the sense that they weren't on the show at the same time, these two probably wouldn’t have met had they not connected through the reality TV franchise. The couple exclusively opened up to Elite Daily about their relationship, and it quickly became clear that what makes Kaitlyn Bristowe and Jason Tartick compatible is so much more than their shared reality TV past. It has everything to do with their common values and perspectives on life.

At the June 10 premiere of the new ABC drama, Grand Hotel (premiering Monday, June 17 at 10 p.m., ET, in Miami Beach, Florida, Bristowe tells me they make it a point to prioritize each other. “I think we share the same values in life and what we want,” Bristowe tells Elite Daily. “I think our number one important thing is putting each other first, and communicating, and making sure each other knows that we’re a priority.” Tartick agrees, saying the “instant connection was just our chemistry and banter. The way we communicate, and what we talk about — it’s just non-stop, we can go on all day.” Communication, people! It works wonders. Tartick also says their core values are “identical. We talk about our friends and families all the time.” Sounds like these two are on exactly the same page.

Bristowe mentions that while they may be very similar in terms of values and priorities, their differences are what make them a good balance for each other, and in turn, what makes them a compatible match. “I think we’re also very different in a lot of ways, where I’m maybe a little bit of a hot mess, and a scatterbrain, and [Jason is] organized,” she says. “I feel like we’re just a really good team, and where I struggle, he can build me up, and vice versa.”

Tartick points out that their work ethics are also very similar, but that being able to separate work and play also makes them compatible. “I think in general, we both work our a**es off, but at the same time, we know how to totally separate from work and enjoy life, and I think that’s really where we hit it off is, we were doing some work together, and then after that we just knew how to have a good time and enjoy every minute of it,” he says.

The work Tartick is probably referring to is Bristowe’s podcast, Off The Vine, on which he made a guest appearance in late 2018 and met Bristowe. The rest is history. ICYMI, Bristowe was the Bachelorette in 2015. She gave her final rose to personal trainer Shawn Booth, and after dating for three years, their November 2018 breakup left Bach fans reeling. Tartick competed on The Bachelorette in 2018, during Becca Kufrin’s season. He and Bristowe reportedly met sometime in late 2018 (although the exact month is unclear) when Tartick went on Off The Vine, and he officially confirmed their relationship in January 2019 on TODAY. They've been posting adorable Instagram pics of their new life, and their rescue dog Ramen ever since. Tartick recently moved into Bristowe's home in Nashville, Tennessee.

They told Elite Daily that their move is going well, with Tartick telling me he really enjoys their “Power Hour” routine. “One of my favorite things is that Kaitlyn always likes to start her day with coffee and end it with wine,” he says. (Same.) “So we already have a schedule where we joke around, we call it the Power Hour. We wake up, have coffee on the patio, and we’ll bring out our lists and talk business and work, and we’ll always try to end our day with a glass of wine and reflect on the day.”

An actual dream! The two say they've already introduced the other to their respective families, and with their moving in together and the adoption of their pup, it really seems like they know what they want, and that they want it with each other. Sounds like a happy ending to me.