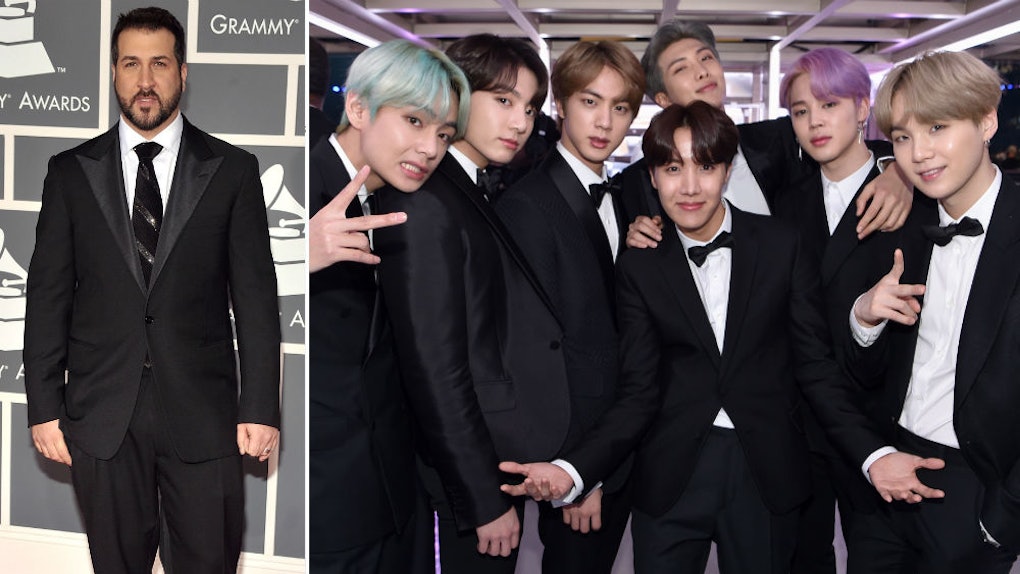 If you told 10-year-old me that she would one day interview Lance Bass and Joey Fatone from *NSYNC in the same month, I would've gotten mad at you for being a dirty liar. But here we are, 15 years later and that's exactly what happened. Color this still-loyal *NSYNC stan pleased. And the *NSYNC secrets from Joey Fatone I learned through this experience? Don't even get me started. It makes me very, very emotional. But what made me even more emotional was Joey Fatone's advice to BTS, because it really sheds light on why so many beloved '90s boy bands couldn't stand the test of time.

Fatone has been popping up on Twitter a lot lately thanks to TV's newest addictive competition series, The Masked Singer. Fans are convinced Fatone is the rabbit on the show, based on the sound of the rabbit's singing voice, the clues the character has given, and the rabbit's body language while performing. While Fatone ensures me he's not the rabbit (I'll believe that when I see it), it's easy to see how fans of the show are convinced the rabbit used to be a member of a boy band. The rabbit is so confident on stage — both vocally and physically — so it's believable that if the rabbit isn't Fatone, it's maybe a member of a former '90s boy band.

The advice is stay together. Keep going.

*NSYNC and Backstreet Boys were the defining boy bands of the '90s. Both groups reached global fame the likes of which weren't seen again until One Direction shot to stardom. Now, with One Direction long over, the popular boy band of the moment is the K-Pop sensation BTS. When asked about the group, Fatone responds with some advice from one iconic boy band to another about how to give your group staying power. And it's going to make all of you *NSYNC fans out there pretty damn emotional.

"The advice is stay together," he says. "Keep going, and know that there’s other projects that you can definitely do, but if you ever do that, separate, take a break, and then come back."

As far as BTS heeding Fatone's advice, it seems like they're already on the right track. The individual members release solo projects regularly (like Jimin's solo track "Promise," V's "Scenery," and RM's mixtape Mono), but they're still undeniably a unit after nearly seven years together (and seven more years to come), which was on full display when they hit the stage to present an award at the 61st Grammy Awards on Feb. 10.

*NSYNC did not have the same success at pursuing solo and group endeavors.

"That didn’t happen with us," Fatone says about *NSYNC's permanent split, and that comment is quite literally tearin' up my heart!

BTS seems to have figured out the magic formula for keeping a pop group together when the members want to do solo work — a feat that a majority of American pop groups have tried and failed to do over the years. Fifth Harmony split shortly after Camila Cabello started pursuing solo projects. One Direction, try as they did, broke apart not long after Zayn Malik left the group to pursue his solo career as well.

But BTS seems to have figured out the best way to keep the group together while simultaneously giving the individual members room to breathe and try out their own solo endeavors. That strategy seems to be that not only is it allowed to happen, but it's also encouraged and supported.

Back during the peak of '90s pop bands, groups announcing "indefinite hiatuses" became the go-to strategy for announcing what was actually a group's permanent breakup. When it came to *NSYNC's "hiatus," fans hoped they would get back together eventually, but that never happened and their indefinite-turned-permanent hiatus is much attributed to the success of Justin Timberlake's solo career.

Fatone has no ounce of bitterness in his voice when he talks about the *NSYNC split, however. The guys are all still good friends, he says, revealing that they tend to spend the Super Bowl together, as Fatone and Timberlake's birthdays usually fall around it. And he lights up when asked about the early *NSYNC years.

In a previous interview with Elite Daily, Lance Bass talked about behind-the-scenes tour moments, revealing that one of his favorite memories was when their tour bus would stop at truck stops in the middle of the night. Fatone says those nights are some of his fondest memories as well.

"[Lance] hit the nail on the head," he says. "We had a tour bus, and it was me and my brother and Lance [on one bus], and then Justin and JC and Chris were on another bus, so we just split it up and we weren’t like, 'Oh, we’re so cool, we need each an individual tour bus.' We would buy anything and everything [at the truck stops]."

When I ask Fatone the same question, knowing Bass told me his own answer, Fatone says, "He probably said the same song, if not both of the same songs."

Turns out, they aren't as ~in sync~ as he thought. Where Bass' least favorite *NSYNC song is "Here We Go," Fatone has two — "I Need Love" and "Riddle."

"What the f*ck is 'Riddle'?" I just heard all of you ask. Apparently, "Riddle" is an *NSYNC song that was only released on the German version of *NSYNC's self-titled debut album.

It is literally a techno track. Take a listen to it here.

Funny enough, "I Need Love" has a very similar vibe to "Riddle." The main difference being that "I Need Love" was on the U.S. version of their debut album and "Riddle" wasn't. I guess Joey Fatone really doesn't like techno music? Considering what his favorite *NSYNC song is, that tracks.

Fatone tells me that "I Thought She Knew" was his favorite song the group ever created.

Now, Fatone is a jack of all trades. He hosts a new game show on the Game Show Network called Common Knowledge, where contestants are tested on "everyday questions everyone should know," according to the show's description. He's used his boisterous personality in the past as the host of famous game shows like The Singing Bee, for which he was the host and Family Feud (for which he is the announcer). So basically, he always had the most entertaining personality in *NSYNC, and he's banked on that ever since *NSYNC said "bye bye bye" for good.

More like this
Lil Huddy's "America's Sweetheart" Is About Charli D'Amelio, & He Admits It – EXCLUSIVE
By Brandy Robidoux
Gottmik Has Already Made 'RuPaul’s Drag Race' History, Win Or Lose — EXCLUSIVE
By Jonathan Borge
Sydney Sweeney’s Hint About Cassie In 'Euphoria' Season 2 Will Make You Nervous — EXCLUSIVE
By Abby Monteil
Stay up to date