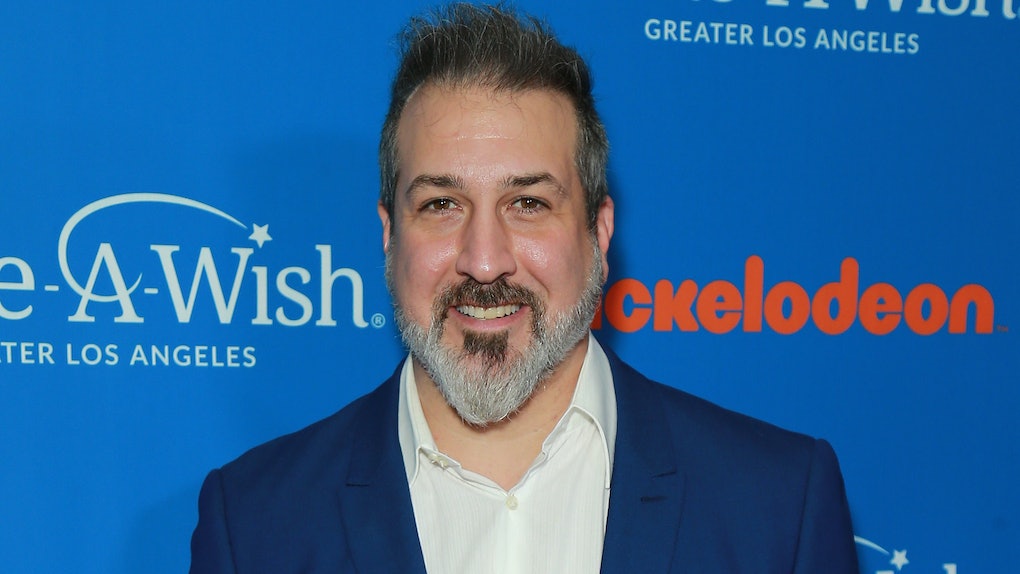 Is Joey Fatone The Rabbit On 'The Masked Singer'? He Weighs In On The Rumors – EXCLUSIVE

Joey Fatone was always the most joyous member of *NSYNC. His big personality made him the most fun to watch during performances and interviews. Any *NSYNC stan (me) knows he's hella recognizable thanks to how his personality reflects in his physicality, so it's no surprise that fans of FOX's new singing competition show, The Masked Singer, are convinced he's one of the celebrities behind the masks. Fans of the show are dying to know: Is Joey Fatone the rabbit on The Masked Singer? He claims he isn't, but this *NSYNC stan is finding that pretty hard to believe for a number of reasons.

The Masked Singer is an American iteration of a South Korean show, King of Mask Singer. The U.S. version is the latest among the list of countries with its own version of the show, and fans are already inexplicably obsessed with the competition series.

The premise is this: Celebrities don the personas of different animals/creatures and compete with their own covers of pop hits. The mystery behind it all is that each contestant's identity is completely concealed by the costumes they wear. There's a bee, a monster, a unicorn, a rabbit, a lion, a peacock, and other characters that are all vying for the top spot on the show (hosted by Nick Cannon and judged by Jenny McCarthy, Robin Thicke, Ken Jeong, and Nicole Scherzinger). But fans don't learn the identity of each contestant until the moment they're eliminated from the competition. It is... oddly addictive to watch.

Fans are pretty convinced that the rabbit is either Joey Fatone or his *NSYNC band member J.C. Chasez. Fatone tells me over the phone that the fan theories are incorrect.

"It’s crazy that Twitter was blowing up. It’s not me," he says. "On top of that it’s pretty funny now they’re leading it that way, whatever the case may be." Fatone's biggest defense against the theories that he's the rabbit is basically, how could he be a contestant on the show when he's vying to be a judge?

"I wanna be a judge on the show, trust me," he says, "I’m trying to call whoever is doing the show to say, 'Hey, I wanna be a judge on something like that' because it looks like fun!" He throws in some theories about the rabbit possibly being Jake Gyllenhaal to throw me off the scent, but you won't convince me this rabbit is not Joey Fatone!

Each episode, the characters drop more clues about their hidden identities to help fans and the judges figure out who they are.

In the show's second episode, the rabbit said he grew up on the stage, but was never alone. That means he was in a group of some kind. *NSYNC was a group, so that is an obvious clue. Moving on. The next clue the rabbit gave was "Synchronized singing is my forte." Outside of the fact that "sync" is literally part of *NSYNC's name, the group also specialized in a cappella music, which requires singers to be very in-sync. Again, obvious clue.

In the clues from Episode 4, the rabbit is seen traipsing through a carnival. He's seen in front of a corn dog stand, he makes it rain with hot dogs, and then he later eats carrots as if they're hot dogs.

This may seem like a meaningless clue, but Fatone chats about a very interesting tidbit about himself in our conversation that has led this celebrity conspiracy theorist to believe that there's absolutely no way the rabbit isn't him. When he takes that mask off, it's gonna be him! (Get it? OK, I'll leave. Bye bye bye. I'M SORRY, I CAN'T STOP.)

After watching that clues video, you might be asking yourself, "Why the f*ck is the rabbit eating carrots like they're hot dogs?" IT'S BECAUSE JOEY FATONE OWNS A HOT DOG RESTAURANT. It's called Fat Ones. Fatone tells me all about it in our conversation, which is largely about this year's Super Bowl.

"I actually went to the Super Bowl 10 years in a row, and it was crazy. It was fun," he says. "The thing is, for me, I always wanted to be back home. It’s great to go to the parties and everything, but it’s nice to actually sit, relax, and have a Super Bowl party."

And Super Bowl parties, of course, include all of the snacks you can imagine, so Fatone has partnered with Heluva Good Dip to help everyone elevate their Super Bowl snacking game.

Heluva Good has created what's basically a dip spinner that'll prevent people from double dipping their Super Bowl snacks — a thing Fatone really just thinks is gross (I mean, fair). The spinner has three different size dippers that help you adjust the amount of dip you put on your snacks. And Fatone thinks it's perfect for, you guessed it, hot dogs.

Fatone's hot dog joint is a play on his own last name. Fat One's, located in Florida where Fatone lives, is a classic hot dog joint that Fatone is hoping to expand to more than just Florida. So why not talk about hot dogs on, I don't know, The Masked Singer?!

Think about it: Why would a rabbit be eating carrots in hot dog buns? Why would a rabbit be making it rain with hot dogs? It's because Joey Fatone is the rabbit on The Masked Singer!! I'm willing to bet that when the rabbit's identity is revealed, Fatone will be under that mask and he will tell the audience that the biggest clue wasn't in his "It's Gonna Be Me" references or saying synchronized singing was his forte. It will be the hot dogs. The defense rests.