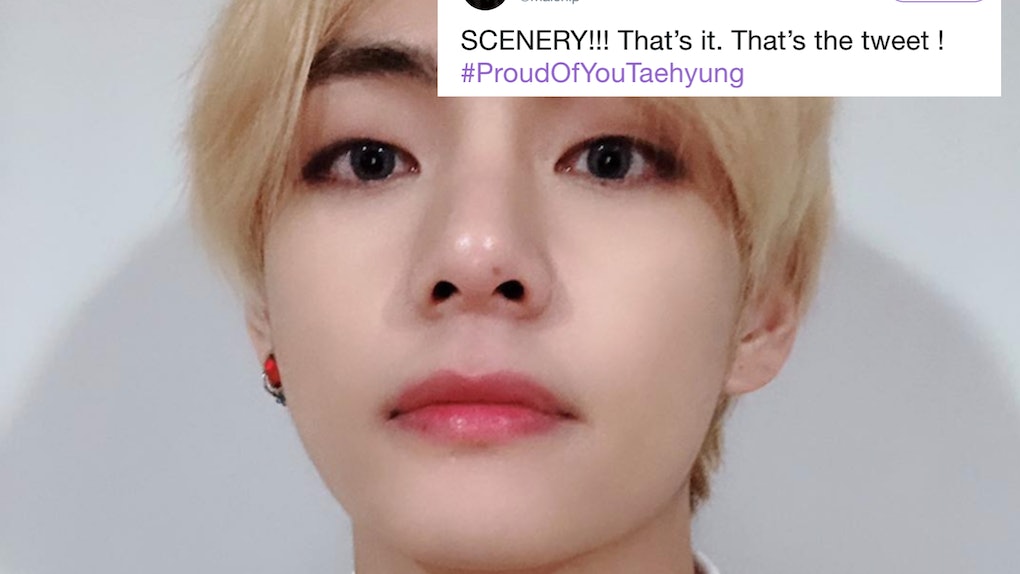 These Tweets About V From BTS' Solo Song "Scenery" Are Loving Its Soft, Soulful Vibe

Alright, alright, alright. I see what's going on here. BTS is taking a "divide and conquer" kind of approach lately as they go on a tiny hiatus to prep for their rumored next comeback. For example, V just took a page out of Jimin's playbook and dropped his own single, so now ARMYs are obviously freaking out. The tweets about V from BTS' solo song "Scenery" are as supportive and emotional as you'd expect from his fanbase, and people are calling the song soft, sweet, and soulful. If there's one thing I know about the BTS boys, it's that they are experts at identifying their fans' emotional weak points and playing right to them.

V dropped "Scenery" on January 30th on Soundcloud and, so far, there's no accompanying music video. ARMYs don't care, though. Whatever they're imagining in their minds is surely as magnificent as whatever V would come up with for a video. The lyrics are touching (obviously), romantic (obviously), and just a little bit sad (obviously), making it one perfect heart-tugging masterpiece. As a taste, here are a few of the lyrics:

In the park where the moon at dawn has passed / I contain my current feelings / This song goes towards you...

I still wonder, wonder / beautiful story / still wonder ,wonder / best part / I still wander, wander / Next story / I want to make you mine

...That very moment, that time, that appearance / having missed it, my emotions feel sad / I regret it, I hope that very moment exists again

Listen to this and try not to leave school or work early to go home and think about your own mortality.

As a fun tidbit, according to one enthusiastic fan, V "made an effort to 100% organically produce his song," meaning he didn't use traditional technology and electronics to create the instrumentals. I'm not really sure if I get it, but this ARMY was pumped anyway.

ARMY on Twitter are eating "Scenery" up and using the hashtag #ProudOfYouTaehyung to share their praise. Fans are tweeting about how they "can't stop listening," that the song "gives them a heart attack," and yes, how totally proud they are of V.

I purple you, V! Damn straight.

Of course, V coined the phrase "I purple you" and it's taken on a life of its own. Jimin had purple hair back at the Seoul Music Awards and used the phrase on stage during one of the boys' acceptance speeches, so everything has come full circle! Fans are leaving just as many purple hearts all over their tweets as they are exclamation points.

"Scenery" is also the perfect followup to Jimin's latest single, "Promise," which was released on New Year's Eve. Not long after that, Jungkook dropped two covers of IU's song "Ending Scene," and Suga collaborated with Lee Sora on the song "Song Request." ARMYs also know J-Hope has a solo album and RM has a mixtape called "Mono." So, who does that leave...?

Jin, you're up, my man! "Scenery" might be a hard act to follow, but I have faith in you!