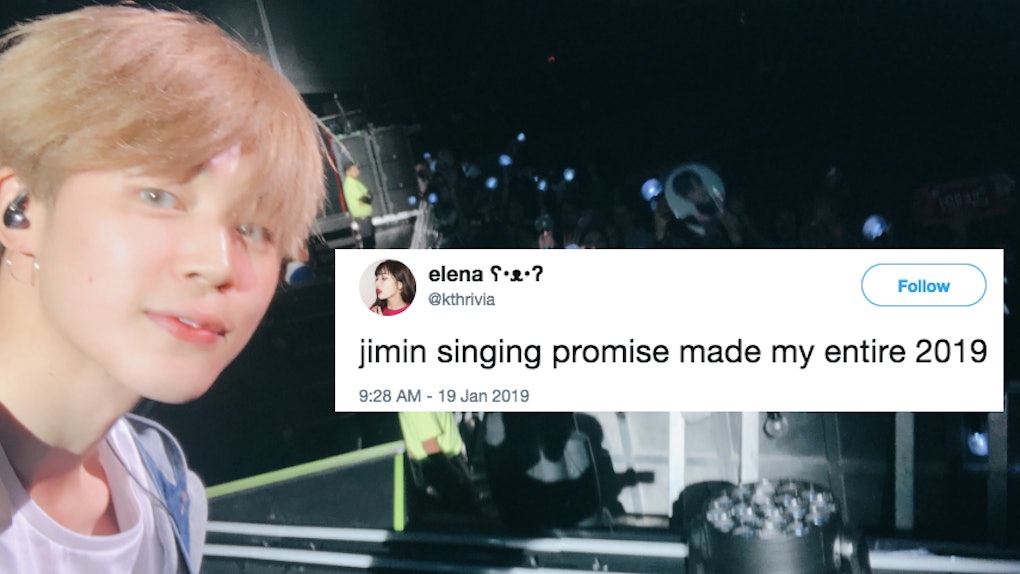 Whether they take the stage as a group or branch off for solo performances, there's no doubt that BTS is an absolute powerhouse. Along with show-stopping performances by the K-pop group at a concert on Saturday, Jan 19, Jimin took the stage alone to perform his new single. This video of BTS' Jimin singing "Promise" with fans in Singapore sounds like absolute heaven, so get ready for some serious feels.

On Saturday, Jan. 19, BTS performed a three-hour concert at the Singapore National Stadium in Kallang, Singapore as part of the "Love Yourself" World Tour. During the concert, Jimin sang his new single, "Promise," which finally dropped on Dec. 30, 2018. In a fan video posted to Twitter by @3shells1991, a pink-haired Jimin can be seen singing into the mic without any music or background vocals. At the nine-second mark he stops to laugh adorably and continues on as fans cheer loudly in the audience. Though Jimin was the only one singing, fellow BTS member RM, who helped Jimin write "Promise," was also on stage holding out his pinkies linked together to symbolize — you guessed it — a pinky promise. At the end of the video, Jimin says, "Love you guys," to the fans in English and once again, the crowd goes wild.

Here's a 30-second video of the moment that left fans breathless.

Fans on Twitter also figuratively cheered Jimin on, sharing tweets like this one by @chubsparkjimin that reads, "I'M IN HEAVEN," or this tweet from Twitter user @malou23_sk, which exclaims, "WTH!!!!! You guys are sooooo lucky hearing this live!!!"

Though he has released solo tracks like "Lie" and "Serendipity" on BTS albums, "Promise" is Jimin's first solo single outside of an album. According to a BTS tweet translated by Twitter account @learnkoreanpop, Jimin said, "It is a song made for me, but it’s also a song made for you." The two minute, 31 second song was produced by BTS producer Slow Rabbit and features lyrics in Korean and English. According to a Tweet from @BTS_billboard, "Promise" passed over one million streams on Soundcloud within 54 minutes of its release.

According to translations from BTS fansite ARMY Cafe and Twitter account Chageunjimie, "Promise" is a sweet ode to loving yourself, which is meant to be a message to both himself and the ARMY. During the chorus of the song, Jimin sings:

Then at the end, he asks listeners to link pinkies and make a promise that no matter how many times they feel alone in a day they won't "throw" themselves away.

With such a sweet message and dreamy vocals, it's no wonder fans in the Singapore National Stadium went wild for Jimin's "Promise." Here's hoping for more singles from the BTS member in 2019!