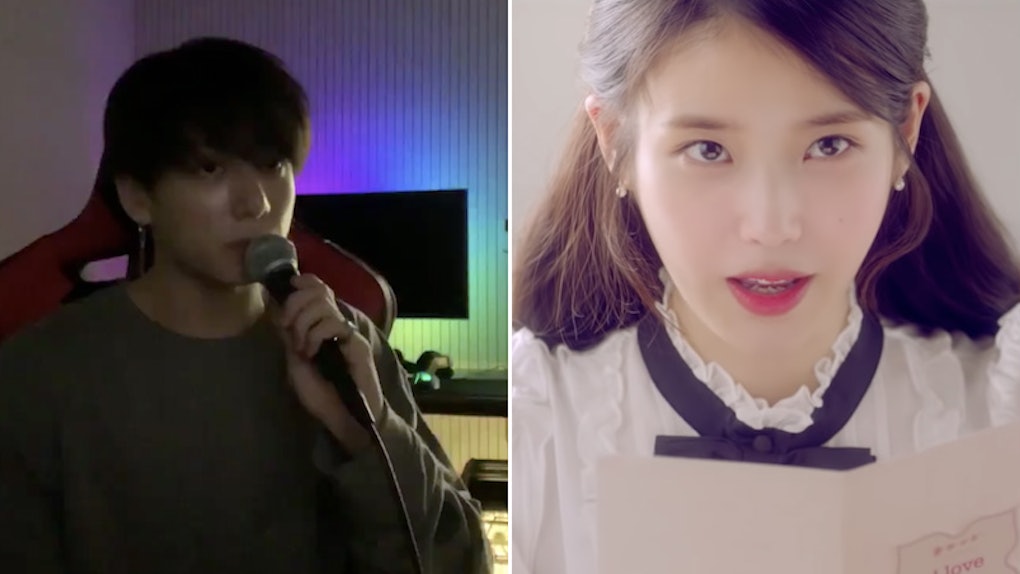 What Do The "Ending Scene" Lyrics Mean? BTS' Jungkook's Cover Of IU's Song Is So Emotional

You're killing me, Jungkook. You're singing straight to my soul. The dreamy BTS member is breaking hearts across the globe with his cover of IU's song "Ending Scene," but everyone is here for it. Even if you don't understand the lyrics or speak Korean, the song itself is truly lovely to listen to. It's a slow, sad melody with an emotional chorus. People are naturally wondering what do the "Ending Scene" lyrics mean? TBH, I say buckle up. It's a melancholy journey.

Jungkook has long been a fan of IU's work. She is an established South-Korean singer, songwriter, and actress in her own right and released "Ending Scene" in 2017. Back in December of 2018, Jungkook released a video of himself singing along to the track in a dark room. According to Jungkook, he didn't totally nail the song, considering he wrote in the captions, "I got confused at the end and went off-pitch…" and added the hashtag #Pleasebeunderstanding. One of the best parts is when he laughs at the end and jokes, "That wasn’t right."

I mean, whatever. The video was watched nearly 7 million times to date and received about 1.5 million likes on Twitter.

Then, on Jan. 23, 2019 (about a month or so later) Jungkook dropped two versions of the song on Soundcloud. That's right, two.

Here is the first version:

And here is the second:

Jungkook's band member Jimin weighed in on Twitter responding to Jungkook's tweet about the song with, "Cover fairy #JIMIN"

Ok, Ok, Ok. So what is Jungkook singing?!

The lyrics seem to be from the perspective of someone talking to an older lover. They're romantic, sad, and thoughtful all at the same time. Take a look:

[Verse 1] Hello, it’s been a while / There’s no question mark in your voice, it’s so you / As if it’s a rule / Your seat is always the same, by the cold entrance

[Verse 2] Make sure you eat well, because it’ll all pass / You'll be able to sleep well like you did before / I really mean it from the bottom of my heart / You have the right to become happier

[Chorus] Don’t say those words, please / You know those words hurt me even more / You said you would love me, so what is this / You don’t know what kind of heart you gave me

[Outro] Please be honest with me / You know I'll believe anything you say / Just like you said / Do you think that I will ever / Be loved by someone like me?

It's a lot to take in, right? IU's original music video for "Ending Scene" is just as visually compelling as it is lyrically, and might give Jungkook's fans a new perspective on his rendition.

Hang in there everyone. We'll be OK.