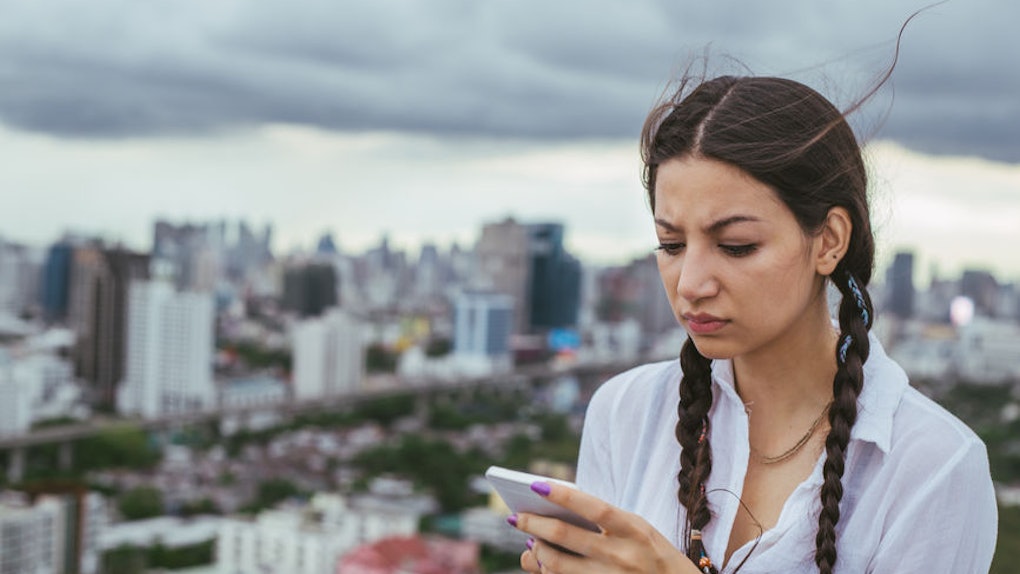 If You’re Always Suspicious About Where Your Partner Is, Here’s Why

Let’s see if this sounds familiar. Your partner gets home late from work — again. According to them, they were just grabbing a beer with coworkers. But for some reason, you’re not buying it. The worst part? This isn’t the first time you’ve been suspicious about where your partner is.

No one wants to feel doubtful that their partner is being honest with them. But that sneaking suspicion can be difficult to control when you have no idea where it stems from. That’s why it’s crucial to understand the reason why you’re feeling that way.

According to licensed clinical social worker Melanie Shapiro, if your partner has a history of dishonest behavior, that can cause some ongoing suspicion on your part — understandably so. When someone breaks your trust, it can obviously become very challenging to know when to believe them. You may find yourself questioning even the smallest details they tell you, like when they got home last night, who they were with, or where they were.

But what if your SO has given you no reason not to trust them? Another common reason why you may be skeptical of their whereabouts is if your own past experiences have made it difficult for you to trust people easily.

“If you’ve had an ex who acted in a way that made you rightfully suspicious (ie. they cheated, didn’t show up when they said they would) you may be more inclined to be triggered by your current partner’s behavior,” says Shapiro.

In other words, even though your partner may not be doing anything shady, it may seem suspect when they show up at 2 a.m. instead of midnight with an innocuous excuse — all because your previous experiences have shattered your trust.

“It is important to weigh the situation with the current situation at hand, rather than compare your current partner to your previous partner,” Shapiro tells Elite Daily. “If your current partner always follows through, demonstrates trustworthy behavior, there is no reason to hold them accountable or be suspicious if you are basing your feelings based on past experiences.”

According to Shapiro, this tactic is called “reality testing,” and it involves asking yourself: Does your reaction match the situation at hand? If it doesn’t, you may be basing your responses on your past experiences. This is completely unsurprising, and nothing to be ashamed about — after all, trust is a fragile thing and takes time to rebuild. But it’s important to recognize it so you can begin to separate your current partner from your ex, and thus, respond based on the trust they’ve built with you, not the trust that your ex broke. Reality testing allows you to see the situation for what it is (rather than your worst fears) and react accordingly.

Once you’ve determined why you may be suspicious about your partner’s whereabouts, it’s time to explore how that impacts your relationship. There's lots of reasons why it can be problematic to be perpetually suspicious about your partner’s whereabouts, but let’s start with the obvious. Constantly worrying about whether or not they’re being truthful with you can take a serious mental and emotional toll on you, and over time, it can wear on your bond with bae.

“It can take away from your own experience in the current relationship,” explains Shapiro. “By focusing on being suspicious you may forget to see all the positives in your partner/relationship. And you may also miss out on the fun during the time you do spend with your partner."

Not to mention, when you spend so much time obsessing over where your partner really is, you can miss out on enjoying your own life. You may find it challenging to be present at work, with family or friends because your constant suspicion hijacks all of your focus.

“When you lose touch with yourself it can lower your self-esteem which certainly has a negative effect on yourself, your partner and your relationships,” adds Shapiro.

Additionally, this constant suspicion can also gradually erode the trust even further in your relationship. This is especially true if you give in to the temptation to check your partner’s texts, emails, etc., or follow them with the intention of finding out the truth.

Fortunately, there are ways to short-circuit this suspicion before it takes over your relationship. Shapiro says the best way to tackle the issue is to start by setting clear and reasonable ground rules with them so that you know what to expect. For example, you might ask them to text you before they go to bed, and to update you if they’re staying out later than they originally said.

“Asking your partner for constant reassurance can be overwhelming but setting guidelines you both agree upon can eliminate suspicion and conflict,” she explains.

“It is also important to address suspicion ahead of time — not in the heat of the moment during an argument, when many emotions and sometimes irrational thoughts can get triggered. If you discuss how you both want to handle this situation beforehand, you both have a game plan in terms of how to respond.”

Most importantly, if you’ve concluded that your suspicion is based on trust issues related to your current or past partner’s behavior, it can also be helpful to seek therapy to work through those learned fears. Having an unbiased professional’s opinion may prove valuable not only for digging into the root of the problem but also in shaking up those problematic thought patterns that are perpetuating your suspicion. A healthy, happy relationship depends on a foundation of trust, and once you can build that up again, that pesky suspicion will begin to fade. You deserve to breathe easy knowing that bae is where they say they are, and fortunately, that’s totally possible to achieve — regardless of your past experiences.

More like this
7 Reasons A Libra & A Pisces Make The Ultimate Power Couple
By Courtney Dercqu
10 Romantic Texts To Send Your Partner Just To Say "I Love You"
By Cosmo Luce
Each Zodiac Sign Gets Bored In Relationships For A Different Reason, Here's Yours
By Rachel Shatto
Stay up to date