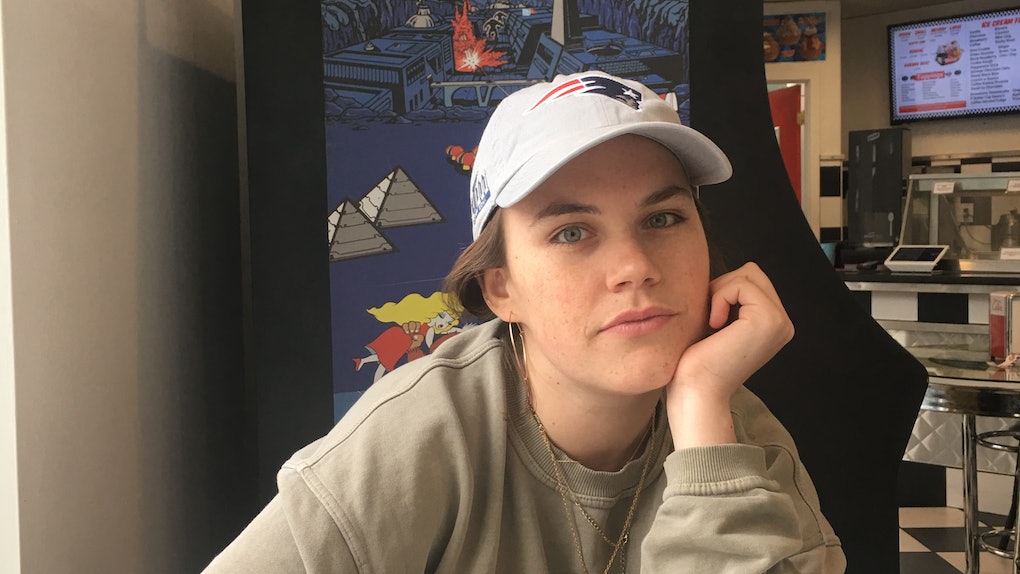 In a lot of ways, I welcome informality. I enjoy casual clothes, laid back work environments, and relaxed vacation itineraries that account for a lot of unstructured free-time. I used to believe that my history with label-less relationships was rooted in embracing freedom and fluidity. But the truth is, I struggle to trust partners that I "casually" date because I've always been scared to be emotionally vulnerable with a boo and therefore, have often left important things unsaid. My constant confusion about the validity of my relationships (AKA "what we are") has always been a consequence of hiding my own needs and feelings in my never-ending uphill battle to appear — as the kids say — "chill."

Then, a school bus-colored box of condoms pulled up into my life (me to myself: Beep, beep, b*tch!) and called everything into question.

A few weeks ago, I noticed that the person I'd been "casually" dating had bought a new box of yellow condoms. There it was, sitting on their bedside table, like the peanut M&Ms of contraceptives. A dozen latex Pikachus just lying there, looking up at me from the creaky nightstand with the drawer that never fully closed. After a quick Google search disguised as texting, I discovered that the golden hue meant that the condoms were not just ribbed, but ultra ribbed. "Why wasn't I consulted about this purchase?" I wondered to myself, debating my date's thought process. Had they read the articles I had written for #NationalCondomWeek? Did they think that these contraceptives would be something I'd be into? Were they even thinking of me at all? I needed answers, but could only come up with more questions.

It suddenly occurred to me that this purchase may not have actually been made in my honor. After three months of "casually" dating, with no mention of the relationship's "Terms & Conditions," I realized that I had no idea if my date was still seeing other people. You see, we're both extroverts who use humor as a defense mechanism, so it never quite seemed like the right time to ask. On all other fronts, we were excellent communicators: two open books, joking our ways through life, choosing to continue to be label-free and unstructured. While I had no desire to make a lifelong commitment to someone who I'd only known for a few weeks, I still wanted to know WTF was happening. In other words, I was happy to keep our relationship a pickup game, but I wanted to know if there were any other players on the bench.

I have always had trust issues, because I've dated so many people in the past who had no intention of turning our dates into an exclusive relationship (which is probably why they never initiated the DTR talk). Time and time again, I have dried tears, met families, edited resumés, and moved furniture for people who would later tell me that we were never "actually" dating, that our relationship was all in my head. In my experience, keeping things "casual" has meant sending mixed messages, being completely unreliable, and only wanting the benefits of my partnership on their own terms. The relationships I've had in the past were not only not chill — they were unhealthy. So, I've put my guard up: I now have trouble relaxing in relationships, because I'm afraid of getting hurt again.

Due to these toxic relationships, I hesitate to intuitively believe that someone could have feelings for me after months of going on fun dates and having great sex. I worry that I'm silly to interpret someone crying in my lap about the pressure their father puts on them to get a more normative career as meaning they, gulp, like me. The people I've "casually" dated have made me feel guilty for getting emotionally invested (a pattern of behavior I now recognize as gaslighting) or greedy for wanting accountability. This has left me skeptical of all new relationships — including my new boo. But I'm ready to break the cycle, for good. I'm taking matters into my own hands.

There I was, wearing my date's sweatpants, in their apartment that they trusted me to be in without them, clutching these yellow condoms. They were staring at me — the box looked like Lemonhead candy and their sight held a sour truth: The pain I had experienced in my past was impacting my ability to be open with the people I date. And the ribbed Despicable Me minions on the nightstand were a motivation to come clean to my date about my trust issues. I needed to open up in the same way that I openly discuss the Real Housewives or feminist Buddhist movements in Thailand — frequently, and completely unabashedly.

I wish I could say that I called my date up immediately and had an open and honest conversation, one that included me telling them that their new condoms reminded me of minions. In reality, I took a week to overthink, talked about it to anyone who would listen to me, and decided I liked them enough to try to see this through. Ultimately, I still used humor to bring it up — but hey, I'm only human! Baby steps. I started a dialogue, I got the ball rolling, and that felt like an accomplishment in and of itself.

Studying the root of your pain and resolving to make a change is hard. Learning to feel safe in relationships is a long process, and you have to be tender and patient with yourself along the way. It's going to take me a while to work up the courage to look the person I'm sleeping with in the eye and ask, "So, what are we doing?" without dropping in a movie reference. It's scary to risk losing someone, but it's even scarier to risk losing a part of yourself. Turns out, I'm not "chill" — and that's perfectly all right with me.

More like this
14 Birthday Date Ideas For Earth Signs That’ll Rock Your Partner’s World
By Caroline Colvin
Here's Why Every Zodiac Sign Might Lie To Their Partner
By Rachel Shatto
4 Zodiac Signs Most Compatible With Ben Barnes, A Confident Leo
By Rachel Shatto
Stay up to date