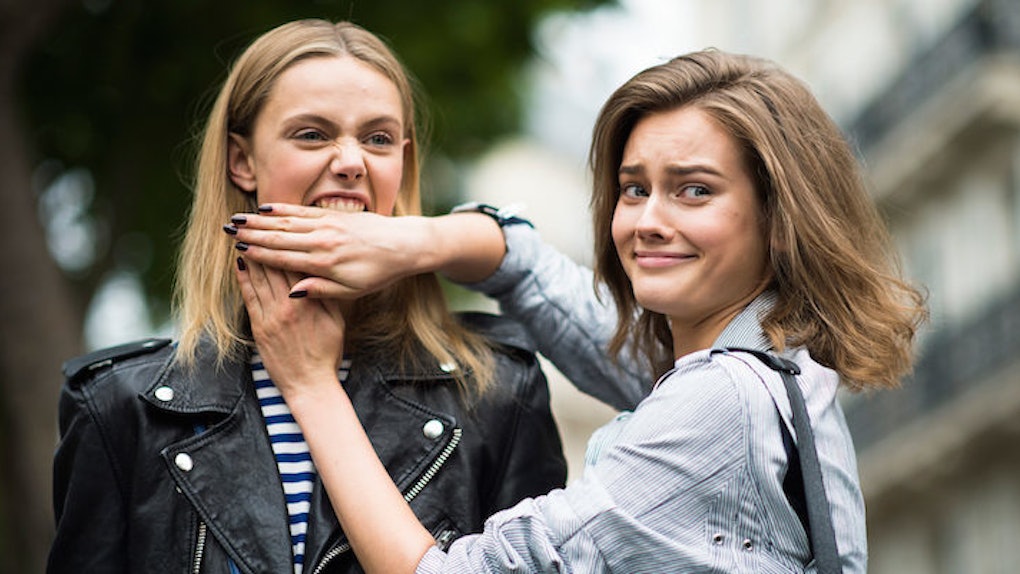 8 Things You Must Know Before Dating A Sarcastic Woman

The sarcastic woman: “I think I like you. Guess I’ll have to notify the other men I’m dating.”

“I do like you. I am dating other people, but you are the front runner. This is a compliment.”

By now, most have heard of the “Five Love Languages” — an incredible book and communication tool by Gary Chapman — and it’s likely you know your primary and secondly love languages (Words of Affirmation and Acts of Service).

But, time and time again, I speak a language many might find foreign, some deem offensive and others see as magic.

On résumés and under proficiencies, you will find a slew of technical skills. If you read closely, you will always find a line item that reads, “Fluent in sarcasm.”

That, in and of itself, is sarcasm. It is not only a matter of tone and delivery. I’m convinced sarcasm is the sixth love language.

It is frequently misinterpreted, but when properly received, it builds bonds.

The universal truth about dating is this: People want what they think they can’t have. I’m not saying this is good. I’m simply saying we all like the chase.

We all enjoy being kept on our toes a bit. Don’t get me wrong, though.

I’m not a ballerina, and I won’t dance on point forever.

But, there is something about the edge, the unknown and the uneasy “Where do we stand?” thoughts that keep you intrigued.

Dating is a game, and I think sarcastic people have a natural edge over the competition.

Well-crafted sarcasm is attractive because it demonstrates intelligence, a sense of humor, emotional IQ, confidence, style and an edge of sassy flirtation. (And, we all know most men love a little sass.)

You can’t help but gravitate toward the hilarious woman who can hold her own, make people laugh and win over the hearts of the crowd, which very well might be your friends.

The wit and syntax swagger of sarcastic women keep their suitors perpetually on the edge of “Am I ‘in’, or...?”

You want in on this brusque battle, but let me, a woman who slings sarcasm, help you out before you enter the ring.

Sarcastic people can be a nightmare to date (yes, I admit it).

Here are a few things you should know about dating a sarcastic woman:

An example of a complisult is “You’ll do, for now,” or “I’m surprised how much I like you because you’re not exactly my type.”

They're part insult, part compliment. It’s how sarcastic people show affection. Don’t be offended; dish it back. We will swoon.

We just need a man who’s good at spelunking the sarcasm caves.

Sarcasm rarely translates well to text and sometimes, we forget to use emoticons.

I’d say it’s safe to add a winky face after 85 percent of the bullsh*t we say to you.

Also, feel free to ask for clarification. If we really like you, we don’t want you to be offended (much).

Just like with other elements of a healthy relationship, you should reciprocate the sarcasm. Please make fun of us.

We can handle your jokes and digs, and we like it when you bite back. It's so hot!

4. But first, check yourself.

Always remember you’re dealing with a woman. Sometimes we don’t understand our own thought processes or reactions, so keep your sarcasm on the lighter side.

We have been known to cry at any moment. I’m not apologizing for the landmine this lays out. I think that adds to the excitement.

Also, being mean is not acceptable. If you are going to say something to seriously hurt a person, that’s not sarcasm.

That’s called the first punch, and we will reach straight for the nukes.

5. A good sarcastic has good judgment.

No, I will not "complisult" your mother the first time you introduce me, unless she does it first. In that case, I might just fall in love with your family.

I was born sarcastic, which means I spent my teen years experiencing the consequences of misused rhetoric.

Please know it does hurt to keep the sarcasm in, but at the age of 28, I have learned how to tailor by delivery.

Since I am a sophisticated young professional, I now drop all sarcastic remarks into a cat meme before sending by email. Cat memes soften all sarcasm.

6. Our memory recall is impeccable.

Remember that one time you did a sidewalk faceplant walking into the gala or that embarrassing story your college buddy shared about you one night at dinner?

It’s cute you think I forgot, but the sarcastic never forgets.

All of your embarrassing moments are properly filed away in our joke warehouse, and they are primed for a future shipment of impeccable timing.

We never forget, and we will never let you forget. That’s why you love us.

7. We think we are hilarious.

Sometimes we say things just because they make us laugh. If you are also fluent, you will likely find our antics equally hilarious.

With us, the laughter is endless. Sarcasm keeps the flame lit.

8. Contrary to belief, we are capable of genuine love.

It’s not all complisults and games. Sarcasm is likely the result of overcoming life’s challenges.

It’s a defense mechanism to keep that huge heart of ours protected, or it's a coping mechanism because sometimes, even the most confident people freak out over meeting new people or working a room.

Don't let this one, very strong, overbearing personality trait overshadow the entire person, or her ability to love.

The more sarcastic, the more capacity there is for love. It just means you've found a woman who doesn't take herself too seriously.

A person who can roll with the punches and likely already has. It's not all of her. It doesn't define her; it refines her.

You just have to get to the core, but it won’t happen by refusing to speak her language.

Meet her with an endearing insult, and you’ll slowly get one foot in the door (then maybe the other, if you're lucky).

Just know that when we do give you sweet compliments, they are genuine and will make you melt.

In the end, life’s too short not to rub salt in the wounds. It’s a joke. Let your life dance lightly on the edge.

No one ever looks back on his or her life and says. “I wish I would have been more serious and a little less lighthearted.”