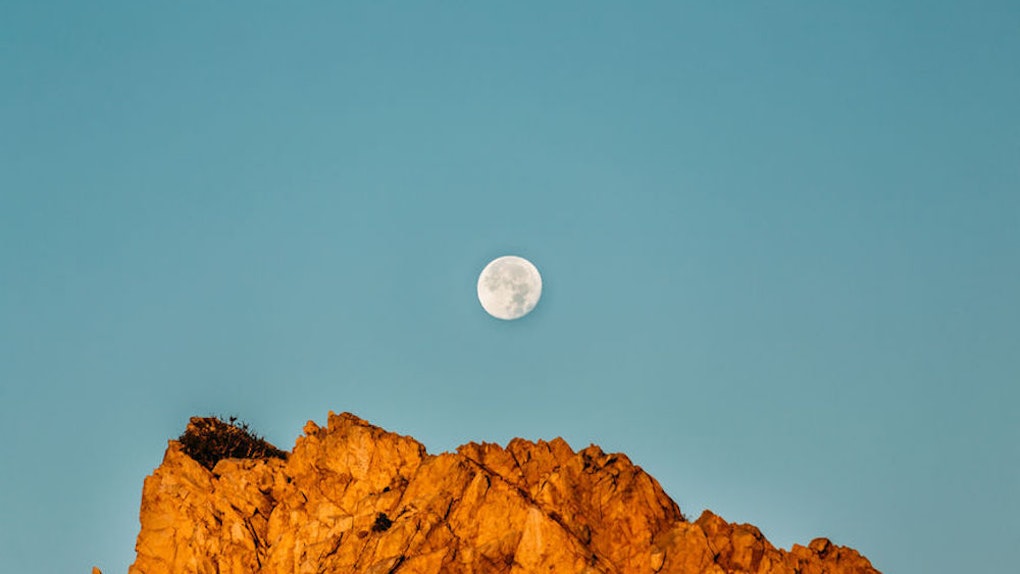 How To Watch The Partial Solar Eclipse Online, So You Don't Miss All The Moon Action

Hold up — what's going on with the moon now? It seems that the planets are throwing another big bash in the sky, with a partial solar eclipse falling on Aug. 11. (Consider this your invite to the viewing party.) On this day, the moon will cross over part of the sun. It will look like our cheesy friend ate a piece of the flaming star, and once again, you'll want to tune in. All you need to know is how to watch the partial solar eclipse online, so that you don't miss a second of all the moon action.

You could take some notes from the moon when it comes to your side hustle. This year, our circle in the sky hasn't taken a rest. There have been the the blood moons and eclipses. The galaxy challenged you to communicate differently when Mercury went into retrograde, and every full moon motivated you to shoot for the stars.

You want to make waves in the real world, and there's truly no better teacher than the wheel of cheese that's in charge of the tides. You've been crossing your fingers that the universe is on your side. Speaking from experience: The Milky Way always has something sweet in mind. So, just keep crushing it — you're getting there. In the meantime, tune into the partial solar eclipse and daydream about all the possibilities that are out there. Thanks to the Internet, you won't miss a minute of another celestial show.

How can you watch the partial solar eclipse online?

Unfortunately, not everyone will be able to walk outside and see the partial solar eclipse in the sky. According to Space.com, the eclipse is going to begin above the North Atlantic Ocean, and then work its way more north and east. So, if you're located on the West Coast, you're going to need to find some other ways to tune in.

Lucky for all of the moon fans out there, there will be various live streams online for your viewing pleasure. Typically, sources like timeanddate.com and CBS News record events (like the July 2018 total lunar eclipse) and put them online. NASA also tends to cover these events, and you can watch webcasts of past eclipses on their eclipse live stream archive page. Online viewing parties for this moon show have not been confirmed yet, according to AL.com. But, you'll likely be able to see the sights on your laptop from the comfort of your couch.

Where on Earth will you actually be able to see the partial solar eclipse?

Certain lovers of the galaxy will be lucky enough to see the partial solar eclipse from where they are on Earth. The eclipse will work its way toward Greenland and Iceland. Space.com reports that it will then move toward northern Europe, bringing its path over the top of our planet. Finally, it will reach areas like Mongolia and China before fading out. (Basically, book some plane tickets and a last-minute trip to the dreamy waterfalls of Iceland, as soon as possible.)

The event will officially begin at 4:02 a.m. EDT, and hit its peak around 5:46 a.m. EDT. The moon is quite a night owl, or maybe an early morning person, depending on how you look at it. Just remember: Don't look directly at it!

What can you expect from the partial solar eclipse?

The partial solar eclipse won't be quite as exciting as a total solar eclipse, but it will still be worth waking up early and brewing an extra cup of coffee. Essentially, a total solar eclipse is when Earth truly gets to experience the dark side. During this kind of event, the moon completely crosses over the sun, and casts a shadow back on the surface of our planet. This time around, the effects won't be as drastic by any means. Although, the eclipse is happening in Leo, and you may feel some shifts in your life.

Summer is coming to a close, meaning an entirely new chapter is in store for you. You'll be heading back to college soon, or may start thinking about moving across the country to pursue a new career path. Take all of this motivation, and let it fuel your passions and wildest dreams. Reality is changing like the phases of the moon.