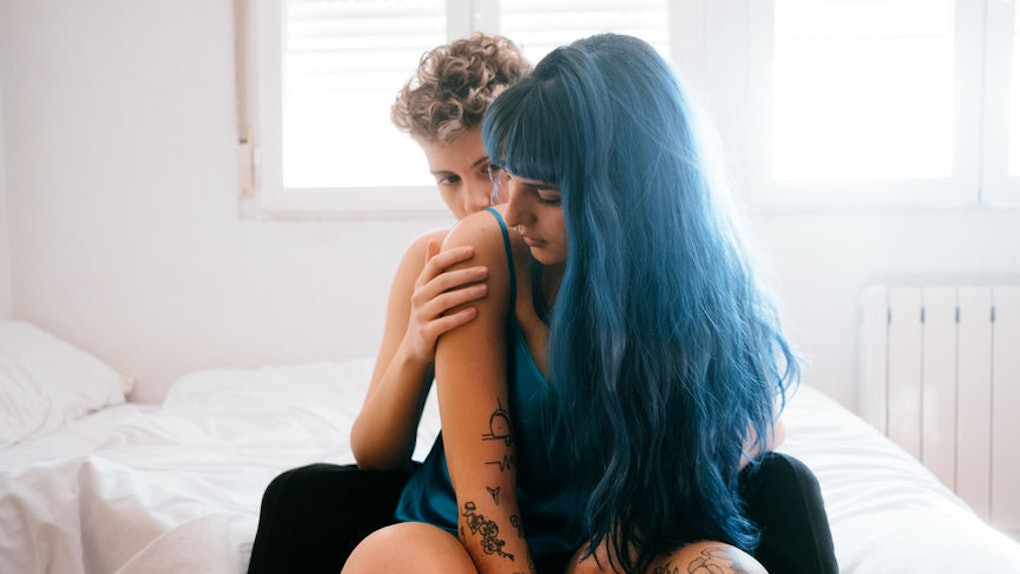 How To Tell Your Partner You Don't Enjoy Dirty Talk, Because It's Not For Everybody

Undoubtedly, one of the most thrilling aspects of any relationship is getting to know your partner — what makes them LOL, which guilty pleasure shows they watch religiously, how they like their eggs, and of course, what they like in the bedroom. But when it comes to talking about your turn-offs, things get a tad more complicated. Which begs the question: how do you tell your partner you don't enjoy dirty talk?

Every individual is unique, meaning what made an ex go wild with desire may totally fall flat with your new boo. Figuring out what moves each other is into between the sheets is certainly more complex than getting to know what music each other is into, however, because many people tend to feel a tad more vulnerable talking about sex. And that can make it tricky to tell your partner that something they’re doing (or saying) isn’t working. If dirty talk isn't doing it for you, you might be struggling to figure out how to let your SO know. Fortunately, Dr. Dawn Michael, a relationship expert and certified clinical sexologist, says it doesn’t have to be an awkward convo.

“When it comes to sex, people can be embarrassed to talk about what their likes and dislikes are,” explains Dr. Michael.

Dr. Michael notes that if your partner is particularly sensitive to criticism, that can make these discussions even more difficult.

“You don't want to hurt their feelings, but by the same token if you are not comfortable with something, you need to talk about it,” she adds.

After bae utters something scandalous during sex, you may be tempted to tell them right in the moment that the dirty talk isn’t doing anything for you. But Dr. Michael advises against having this conversation while you’re intimate. Instead, she recommends bringing it up outside the bedroom, when you’re feeling less vulnerable and they’re less likely to perceive your comments as rejection. She also says it's best to deliberately approach the topic at a time when you know you can both really listen to each other.

“Ask to talk about it instead of just throwing it out there so that the other person is ready to hear you out,” she tells Elite Daily.

Dr. Michael stresses that it’s important to be as specific as possible. Are there certain words or phrases that make you cringe? Is it the way they’re saying it, and not what’s being said, that rubs you the wrong way? Or is it the act of dirty talk in general that you’re not a fan of? These are the specifics you should dig into. The more information you can share with your partner, the better they'll be able to meet your needs next time you're getting frisky. Lastly, and most importantly, Dr. Michael advises focusing on what you do dig, rather than what you don’t.

“Only saying what you don't like can feel negative,” Dr. Michael explains. “Criticism rarely works if there is not a solution to replace it with.”

So, after gently letting your boo know that the dirty talk isn’t getting you in the mood, provide some alternative suggestions. This will twist a potentially negative conversation into a positive one, in which you both have the opportunity to learn more about what gets each of you hot and bothered.

In any relationship, there’s a learning curve where sex is concerned. At some point, each of you may do or say something that kills the vibe for the other person, and guess what? That’s totally OK. The key is to be open and honest with each other as soon as these discrepancies crop up. After all, no loving, supportive partner would want to keep doing something that’s a turn-off for their significant other. As with any tricky relationship talk, it’s all about how you say it. As long as you can bring it up to your partner outside the bedroom, be as specific as possible, and provide some positive, practical solutions, you’ll likely be able to take a potentially awkward conversation and turn it into something productive. If that’s not the epitome of intimacy, I don’t know what is.