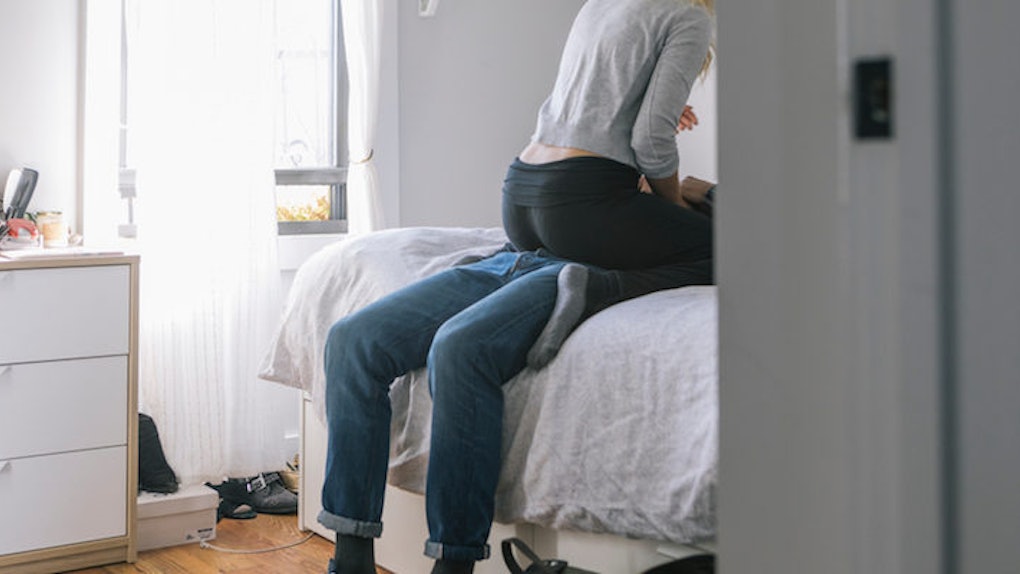 Some people say sex is like pizza: Even when it's bad, it's still pretty damn good.

This sentiment is particularly true for men.

Even though bad sex won't stop us from wanting it again, we'd obviously rather have good sex. Because of this, I want to impart some knowledge, on behalf of men, about what will turn us off during sex.

Now, I'm not trying to say people who are guilty of these turn-offs are bad at sex, per se. I'm just saying if you don't do these things, the sex will be better.

I also know men are guilty of a bunch of what I've listed below as well, but I'm not here to write about what we're bad at — this one's on you.

Are we all on the same page here? Good. Let's get to it:

I know there are many, many men who don't know what the hell they're doing with a vagina, but I think we can all agree that a penis is exponentially easier to figure out, as it's external.

But be that as it may, there are still a TON of ladies out there who have no idea what they're doing with a man's love muscle.

There are still a TON of ladies out there who have no idea what they're doing with a man's love muscle.

Whether it's teeth during oral, tugging at our dicks like you're farming carrots or using almost no pressure while you stroke it, a woman's lack of knowledge or unwillingness to learn about the penis and its erogenous zones is quite the unanimous turn-off for dudes.

A woman who starfishes likely thinks the fact that she consented to sleeping with you is the greatest gift she could possibly impart on you.

Her body is her temple, and it's your job to get on your knees and worship. So, she'll just lay down on the bed and... that's pretty much it. She's likely under the impression that penetration equals sex and that all she's required to do is open her legs until this shit's over with.

Here's the thing: Most guys don't want to make love to a corpse, nor do we want to have sex with somebody who seems so disinterested in sex, she can't even meet us halfway.

Most guys don't want to make love to a corpse.

I'd have to say this is my biggest turn-off of the bunch.

Sure, I like that you're enjoying yourself and letting me know what works for you with verbal cues and affirmations. But there's NO way in hell I'm as good as you're making this out to be.

There's NO way in hell I'm as good as you're making this out to be.

She likes missionary because that's what gets her off, so you almost always resort to this position for its efficiency.

But sex shouldn't be regarded this way. A climax isn't the be-all and end-all of a sexual experience.

If you're with a man you trust, open yourself up to new experiences. I guarantee your man will be more than happy to try whatever it is you might be curious about.

Want to really make him happy? Hop on top and ride him with enthusiasm. Dudes love that shit.

Want to really make him happy? Hop on top and ride him with enthusiasm.

Having sex with a dick-tator is like watching a teacher mark your exam right in front of you. She tells you where to go and what to do like you've never done this before.

Now, don't get me wrong, a little coaching can encourage better sex. But emasculating him while he's inside you isn't the way to do it.

You can usually catch on to this pretty quickly when you've gone down on her for a good 20 minutes, and she doesn't even attempt to return the favor.

Women always cite a man's confidence as a major turn-on, and guys perceive women the same way. You can't quite put a finger on it, but the right amount of confidence can definitely heat things up in the genital region.

A woman who lacks confidence is often too timid. She refuses to have the lights on during sex and prefers to leave her shirt on.

Ladies, come on. Don't do that. Dudes love boobs! Let us see them, touch them and experience them.

Dudes love boobs! Let us see them, touch them and experience them.

A lack of confidence basically translates to mediocre sex, and worse, no boob touching.

8. She doesn't venture from the dick.

Though we do like when you touch them, dudes are more than just our penises. And a woman shows her lack of experience or unwillingness to learn about a man by tending to the penis and the penis only.

Cradle those balls, work those nipples and bite that earlobe — come on now!

I understand that your heart's in the right place when you fake an orgasm, but in reality, what you're doing couldn't be more wrong.

By faking an orgasm, you're telling this guy that whatever he's doing feels good, even though it doesn't. And if this man is your partner, he's going to continue doing it because he thinks it's getting you off.

By faking an orgasm, you're telling this guy that whatever he's doing feels good, even though it doesn't.

10. She treats the dick like she's scared of it.

Like the vagina, the penis is a pretty resourceful piece of equipment. So when you venture down yonder, don't be afraid to get a little rough with it.

We don't want to feel like our dick is being gently tickled by a feather duster. We want you to grab a hold of the thing and show us how badly you want it.

That's what will turn us on.