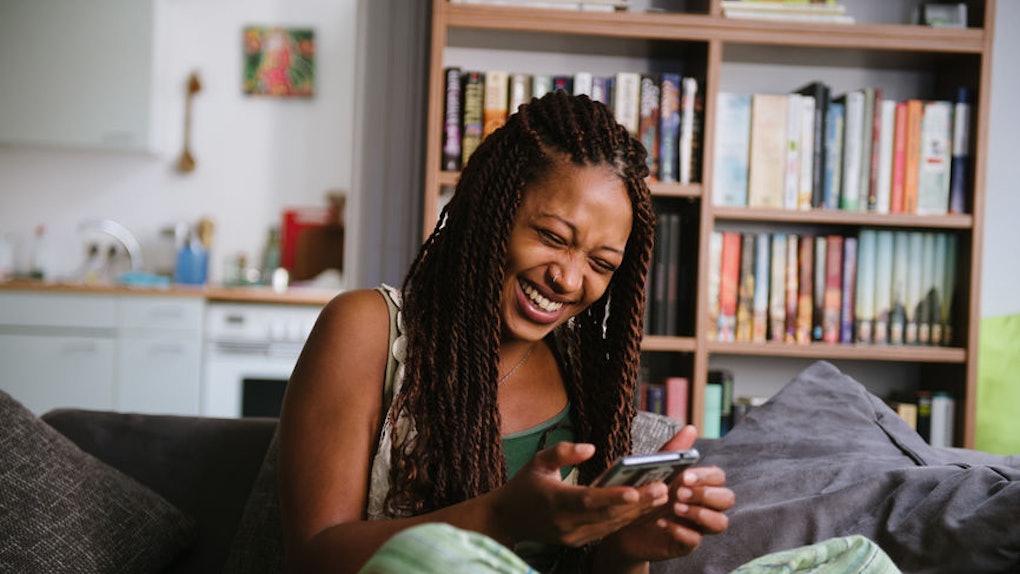 How Often Should You Talk To Your Partner Throughout The Day? 12 Women Reveal Their Habits

When my partner and I first started dating, we spoke to each other all day, every day. Sometimes he would even make me elaborate images using emojis when the conversation started to taper off. Basically, we'd text throughout the workday, then we'd leave work and talk on the phone. But as our relationship progresses, I've been finding that nonstop communication has also come to a halt. This leaves me wondering: How often should you talk to your partner every day?

I mean, communication is the foundation of pretty much any strong relationship, but how much communicating needs to be done? Well, according to Dr. Gary Brown, a prominent couples' therapist in Los Angeles, here’s really no hard and fast rule. “Every couple is unique and so there really is no hard and fast rule about how often you should talk with your partner throughout the day,” he says. That being said, New York City-based relationship expert Susan Winter recommends couples maintain a baseline of keeping in touch on a daily basis, or — at the very least — every other day, especially if they’re long distance. “Without ongoing contact, your relationship will wither,” she warns.

That being said, different communication styles work for different couples. In a Reddit AskWomen thread, 12 women shared how often they keep in touch with their partners. Read on to learn their habits, so you don’t need to stress.

This couple used to text all the time but now they also talk on the phone.

We've been together for four years. When we first started dating, we were in undergrad. We would text all day. Now, it's mostly the same, but we talk on the phone more often and text quite a bit less because we work.

This couple only texts when necessary.

We don’t speak on the phone at all. We will text if necessary though. Neither of us are very chatty. Conversation can wait until the evening when we’re at home.

This couple stopped texting for the sake of texting when they moved in with each other.

If we're not together we rarely text or talk on the phone just for the sake of talking to each other, usually it's only to communicate something specific. We're married now, but I'd say texting for the sake of texting stopped around the time we moved in together.

This couple jokes around with each other throughout the work day.

We work together, so pretty much all day. It's nothing but jokes, debates and hot takes with a little bit of gossip thrown into the mix. If anything, we talk more now than when we first started dating.

This couple doesn't need to be talking all the time.

While he's working I don't- we talk after he gets home.If a communication of some sort is necessary we might text but only if it needs to be done.We're both busy and we're both old- don't have the need for constant contact that many younger people seem to have now. Later this evening is soon enough.

This couple started speaking less frequently after they moved to the same country.

If he's at work, we don't talk at all unless there's something we need to say (usually "I'm working late" or "I picked up X at the store but I forgot Y"). If one of us/both of us are out separately, we might text about a cute dog or something funny. But we really don't text that much. Our phone calls are literally 5 minutes long because my husband hates phone calls.When we're both home, we chat but there are long periods where we aren't talking. I don't think our communication dropped off when we started living together. When we lived in different countries, we'd chat for hours.

This couple is still in touch throughout the day, even though they're breaking up.

We're in the midst of breaking up right now (for reasons we can't really control) but we still talk/text at least every few hours, even during work. Sometimes it might just be an emoji. I noticed after about 2 years it dropped down a little.

Before living together, this couple always sent good night and good morning texts.

We usually text at least a few times at work - something happened or plans for that night and how's your day going. We live together but when we didn't we always sent a good morning and goodnight text or phone call too.

This couple says constant communication started to "dwindle" after about a year.

When he travels we'll talk when possible but usually don't go out of our way to make it happen. When home and working we usually just text each other jokes or what our lunch is to encourage healthy choices. It definitely dwindles a bit after 1 year ish.

This couple says their texting settled into a pattern after a year.

We’ve been together and living together for almost six years. We text casually throughout the day but it’s usually pretty short, casual stuff — “I’m at the store, need anything?” or “lol look at this flouffy cat I found on Twitter.”When we were first dating we had these hugely long text conversations constantly. After awhile though yeah it just sort of settled into a daily pattern.

When these two are both free, they talk more intensely.

We have a back and forth Snapchat thread going that we’ll respond to sporadically. How often we contribute depends on how busy he is at work and whether or not I’m up to anything. It’s definitely tapered off ever since we started dating and that’s even more true now that we’re time zones apart. But we talk more vigorously than we did before when it happens that we have a spare moment at the same time.

This couple says their jobs changed the way they communicate.

We used to text all the time, even when we were both at work, but our job routines changed: He can't have a phone on site and I work in the hospital and don't get a signal 99% of the time. When you live with someone it's best to just wait until they get home. There's only so much that can happen in the 9 hours you're away from each other and I like saving it for conversation.

In general, Brown says it’s more about what you talk about than how often you’re talking. “I think that the quantity of time you spend with your partner is less important than the quality of your conversations,” he says.

Oh, and if you get a chance, Brown recommends swapping out your texts for a good old-fashioned phone call. “I recommend that couples make actually talking a priority, rather than texting,” he says. “Certainly, you can do both but actually talking — even if just for a little bit — can make a big difference. No amount of texting can replace hearing your loved one's voice.”

Maybe it’s the ‘90s kid in me, but I totally agree. I would swap millions of texts for one phone call with my partner any day.

This article was originally published on July 3, 2018