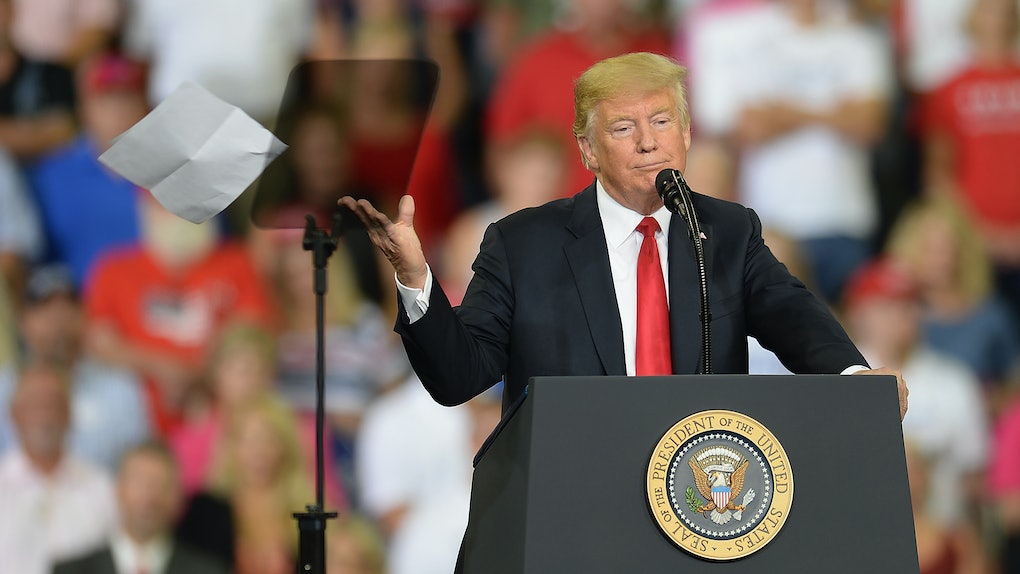 Compounded by drama emanating from the White House following the death of Senator John McCain, the country has been through a whirlwind week. McCain passed away on Saturday, Aug. 25, after discontinuing treatment for brain cancer. Those who've been tuned into the capital since might not be surprised to learn that in an interview Thursday with Bloomberg, the president defended his unprecedented handling of the senator's passing. In fact, Donald Trump's comments about McCain's death were pretty on-brand for the president.

The president, who had a long-standing feud with the late senator, generally sidestepped the normal decorum in times of a loss. But Trump thought he did a fine job as president leading the nation through its mourning. Asked if he missed an opportunity to bring the country together, Trump in the Aug. 31 interview said, "No, I don't think I did at all ... I've done everything that they requested and no, I don't think I have at all."

White House Press Secretary Sarah Huckabee Sanders, who was with Trump during the Oval Office interview, reportedly "stared at him" when he was asked whether he thought McCain would've made a better president.

"I don't want to comment on it," Trump reportedly told the paper. "I have a very strong opinion, all right." Apparently noticing Sanders' body language towards him, he jokingly said that his press secretary was having a "nervous breakdown" over how he'd answer that question, according to Bloomberg. "Maybe I'll give you that answer someday later," he added.

Since Saturday, the president has been catching flak for his response to McCain's death. Trump had initially tweeted about the senator's passing but had rejected releasing a planned statement praising McCain, The Washington Post reported, opting to limit his remarks to the 240-character limit. He also repeatedly dodged reporters' questions about McCain on Monday, ignoring them completely.

But that wasn't all. Breaking with long-standing precedent for honoring the deceased, Trump had raised the White House flag at the soonest possible time. Per U.S. law, the American flag is to be lowered to half-staff following the death of important officials. But by Monday morning, just after the mandatory period had passed, Trump had raised the flag once more, which many perceived as disrespectful to McCain. The move was met with resounding backlash across the capital and beyond as other federal buildings — including the capitol — maintained their flags in the lowered position.

Leaders from across the aisle condemned Trump's overall response to McCain's passing — or lack thereof. Responding to the mounting pressure around the flag and his public silence, the president on Monday released a statement about McCain's death and signed a proclamation ordering all flags to be kept at half-staff until the day of interment.

In the aftermath of the dramatic week, Trump was not invited to attend a Friday funeral honoring McCain in the Capitol Rotunda, where Vice President Mike Pence spoke in his stead. (But Pence still managed to name-drop Trump twice during his eulogy.)

McCain, prior to serving nearly 32 years in the U.S. Senate, had served in the Vietnam War, enduring five years of imprisonment and torture in the process, and earned numerous medals commending his service. As a senator, he was known as a more independent politician who didn't always vote along party lines.

The president's feud with McCain had been going on since 1999, per TIME, and was based on a number of different beefs they had with each other, which only worsened during the 2016 campaign and into Trump's presidency. McCain was most known, recently, for his jaw-dropping thumbs down vote on the GOP's "skinny repeal" bill that sought to undo key parts of the Affordable Care Act (ACA), also known as Obamacare. He was also an advocate for immigration reform and publicly condemned the administration's move to separate migrant families under the zero-tolerance policy. Trump, as a candidate for president, shaded McCain for being held captive during his time as a prisoner of war in Vietnam. McCain, meanwhile, rescinded his support of then-candidate Trump when news of the Access Hollywood tape came out revealing crude remarks he'd apparently made about women.

In the Bloomberg interview Thursday, Trump acknowledged he and McCain's (substantial) differences. "We had our disagreements and they were very strong disagreements," he said. "I disagreed with many of the things that I assume he believed in."

Sanders reportedly had multiple talks with her boss in the past week about "paying respects" to the late senator, per the outlet. According to a report Monday in The Wall Street Journal, the president had been resistant to re-lowering the flag in McCain's honor because the senator's death, he felt, was getting too much attention in the press.

Trump's interview came amidst a week of ceremonies honoring the senator. Friday's funeral at the U.S. Capitol Rotunda will be followed by a memorial service on Saturday, and capped with a private ceremony and finally interment at the U.S. Naval Academy Cemetery on Sunday. According to The New York Times, the White House staff is already preparing for the strong reactions Trump might have in light of all the events honoring McCain.