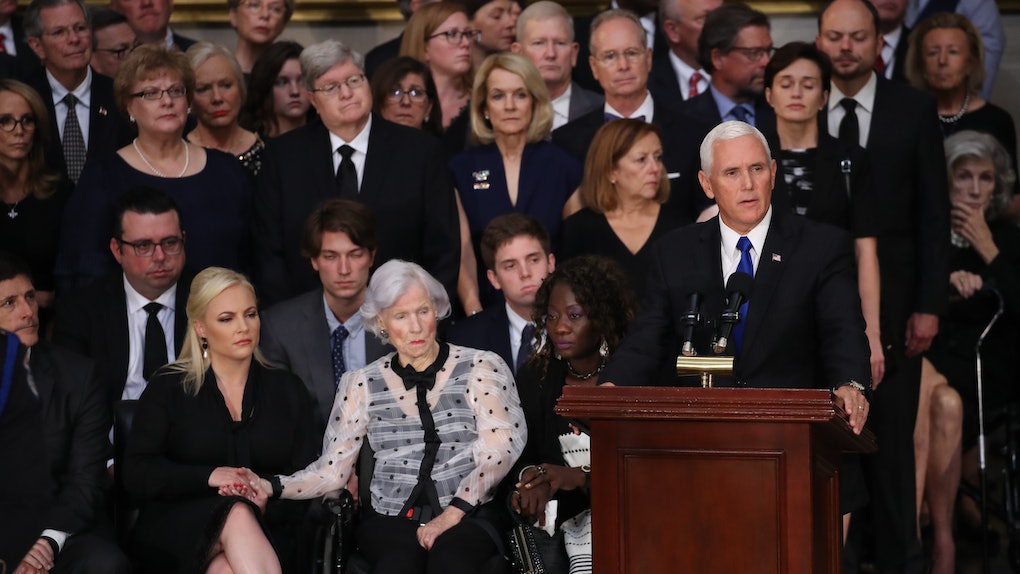 Although President Donald Trump was not invited to the funerals for late Senator John McCain, the vice president still managed to make reference to him in delivering his remarks. The mourning family, including the senator's daughter, seemed less than thrilled. Online, tweets about Meghan McCain during Mike Pence's eulogy at her dad's funeral are pointing out that the younger McCain seemed less than happy about Pence's speech.

The speech came during McCain's funeral in Washington D.C. at the U.S. Capitol held at 11 a.m. ET on Friday, Aug. 31. While funerals are emotionally fraught and full of complex feelings, many Twitter users thought that Meghan did not look happy at Pence's speech, and particularly his mentions of the president.

"The president asked me to be here on behalf of a grateful nation," Pence said in his speech, "to pay debt of honor and respect to a man who served our country throughout his life, in uniform and in public office."

Pence referenced the uninvited president once more. "As President Trump said yesterday, we respect his service to the country" he said.

Trump was asked not to attend Friday's ceremony after a week of tumult in the capitol surrounding the senator's death. The president came under fierce condemnation from all corners of Washington and beyond for his perceived disrespect towards the deceased and his family.

On Monday, Trump bucked tradition when he raised the White House flag, after keeping it lowered to half-staff for only the minimum amount of time required in times of national mourning. In response to the widespread backlash, the president via a proclamation ordered the flag re-lowered again on Monday afternoon, where it is to stay at half-staff until McCain's interment. But despite the drama, and Trump's not being invited to Friday's funeral, his right-hand man still brought up his name.

Footage from the funeral, which was broadcast live, showed Meghan McCain just a few feet from the podium where the speakers gave their remarks. As she watched Pence speak, McCain's face took on an expression that many on Twitter described as "daggers."

"I feel like Meghan McCain is trying to set Pence on fire with her mind," wrote one user. "Meghan McCain looks like she is ready to drop Mike Pence," added another.

Pence wasn't the only person to invoke the president during his speech. Speaker of the House Paul Ryan also made mention of Trump, and even brought up McCain's unsuccessful bid for the presidency in 2008. As Twitter users pointed out, McCain's daughter also appeared upset during those remarks.

To be fair, though, Pence's speech did seem to elicit some positive responses from the McCain family on Friday, and the VP did make a touching tribute to the late senator's legacy.

McCain is lying in state at the U.S. Capitol Rotunda on Friday, where visitors may pay their respects between 2 p.m. and 8 p.m. ET. The ceremony is part of a week's worth of events paying tribute to the late senator. On Saturday, the tributes will continue with a memorial service at the National Cathedral, where former Presidents Barack Obama and George W. Bush will speak. The week will conclude with a second, private ceremony on Sunday followed by an interment in the U.S. Naval Academy Cemetery.