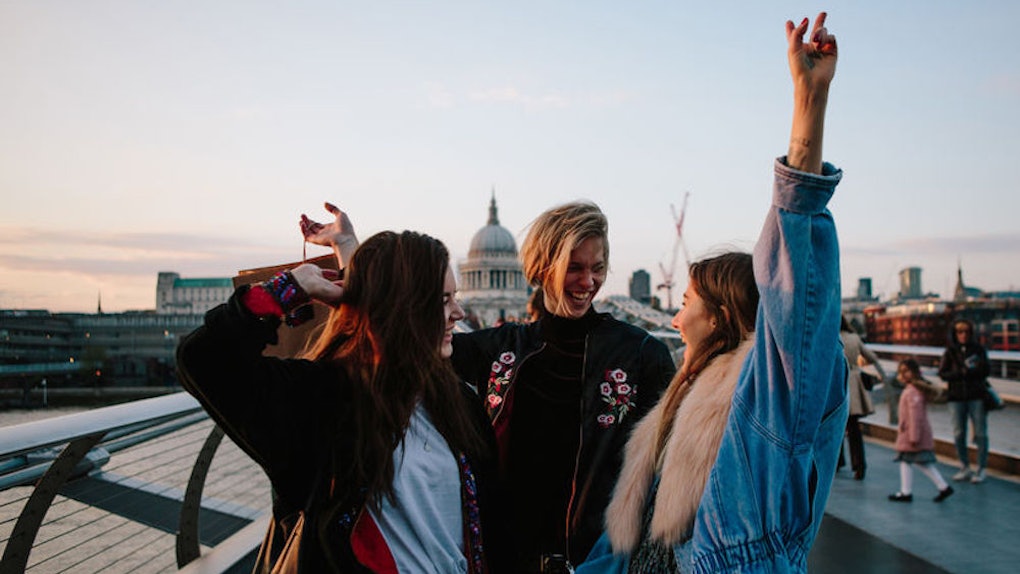 9 Unique Instagram Pictures To Take When You're Studying Abroad

The semester you study abroad will feel like anything but average. You'll spend four or five months living in another country, and soaking up every bit of it. From the second you hop on the plane, the adventure begins — and you'll want to take a picture to remember it all. Every pizza, vineyard, and unreal backdrop calls for a snap. Lucky for you, I've come up with some unique Instagram pictures to take when you're studying abroad, so that you're not just another girl who travels on the 'Gram.

Let's be honest: Travel and lifestyle bloggers have set the standards pretty high. They're constantly exploring new places and taking cute snaps in sweet cities around the world. How do you even compete with #content like that? You've considered purchasing a preset pack for Lightroom, or at least downloading some better editing apps on your phone. You just want to capture every second of this semester abroad, and show your followers that you're living your best life.

Every weekend you'll go to the train station with your duffle bag and camera in hand. You do some scrolling on Pinterest and Instagram, and know exactly what poses you want to do in front of landmarks like the Eiffel Tower. I've been there and done that, too. These nine unique shots will put something a little different on your profile, and show the social media world that you experience is anything but average.

1. The "Off The Beaten Path" Photo

When you first get to your destination, you're going to be a tourist. You'll scope out all of the sights that have been on your bucket list, and eat at the restaurants that everybody recommends.

But after a month or so, you'll feel like you're becoming one of the locals. After all, you'll have an apartment to call your own, and made good friends with the couple who owns the panini shop downstairs. You'll dodge the people with selfie sticks on the streets, and complain to your roommates about the crowds around the Ponte Vecchio. You'll even make it a point to eat at places that are totally off the radar. Show your friends back home what your new home is all about, by posting a photo that feels off the beaten path.

2. The "Better Where It's Wetter" Photo

You're bound to find yourself next to water at least once during your semester abroad. You might spend a weekend in Venice and take a gondola ride, or hang out by the beach with your girlfriends in Barcelona. The Mediterranean Sea is more breathtaking than you ever imagined it to be, and you're having the sweetest time.

Posting pictures of bright teal waters and colorful towns that sit along the coast will turn your 'Gram into major #TravelGoals. Your followers will want to book a plane ticket ASAP, just because it's truly better where it's wetter.

Traveling changes your perspective — figuratively and also quite literally. You never come home from a trip feeling the same as when you left, because you've been part of someone else's world. You've immersed yourself in a different culture, and had conversations in an entirely different language. Kind of cool, huh? (Trust me, you'll never be able to get over it.)

During your semester, you'll go on hikes along the coast of Italy, or possibly even go skydiving out of a plane. Getting out of your comfort zone is sort of a must, and you'll get an adrenaline rush from every excursion or experience. You're living your best life. Show social media that you're truly on top of the world.

At some point during your semester abroad, you're going to miss home. It's sort of inevitable, and happens to everyone, whether they're open about it or not.

You'll constantly post pictures of new places, and joke with your followers that you're not hopping on the plane home. Your parents and besties will comment back saying, "You better!" just because they miss you so much. So, every once in a while, find a piece of home and share it with the world. It'll bring you back down-to-Earth, because let's be honest: Studying abroad doesn't feel real. For me, it was eating a burger in Milan that reminded me of my roots.

5. The "Adventure Is Out There" Photo

If you're studying abroad, that means there has been something inside of you just waiting to see the world. Your wanderlust took over the second you realized you could spend a semester abroad. You started daydreaming in class about hanging out with the kangaroos in Australia, or soaking up the sun in South Africa. Somewhere in between, you'll go to school and then pack your suitcase for trips on the weekends.

This opportunity will be the adventure of a lifetime, and you know it's the best decision you ever made. (Traveling oddly prepares you for the real world — who would've guessed that?) Post a picture on the 'Gram showing off that adventurous side, when you're amongst the mountains or staring off into a foggy sea.

6. The "Following My Feet" Photo

Personally, I love taking pictures of my feet. It's not that I have any sort of fetish; I just love showing the world that I'm truly following my wanderlust.

No matter where you go during your semester abroad, you're going to want to take a thousand pictures. You'll spend time hanging near the Eiffel Tower, and soaking in every bit of your surroundings. Challenge yourself to not just look at the landmarks, but also find sweet spots above your head and beneath your toes. That's what exploring is really all about.

7. The "Look At All That Architecture" Photo

Every day on your way to class, you'll walk by incredible art and architecture, that you once only saw in the history books. You'll pass by the Colosseum on your way to figure drawing, and Big Ben before you catch the tube back to your flat. It'll become oddly normal to see these iconic landmarks.

One day when you're walking to meet up with classmates for an espresso, take a second to stop for a picture. Get up close to the details of the buildings, and show the world what you're seeing in person. Truth is, your phone won't do it justice. But, your followers will always double-tap for the Duomo.

8. The "Just Came Here For The Food" Photo

Let's be honest: One of the best parts of studying abroad is the food. Traveling to another country means you're trying all sorts of new flavors, and discovering the beauty of a scoop of gelato on a hot day. You'll spend hours at a charming restaurant ordering plates of pasta that have been curated by the chefs for years. It's only right that you document every single dish.

In fact, you and your study abroad friends will laugh about how you all pull out your cameras to snap the perfect foodie shot before digging in. You'll pose with your cone along the Ponte Vecchio, and think up the most clever pizza puns. Send a slice through the screen, OK?

When I studied abroad, I wanted to take a similar picture in every place. It just felt like something that would bring the entire trip together, and made me realize how once-in-a-lifetime this whole experience could be.

The first "peace sign" photo I took was in Florence, and happened sort of accidentally. I was awkward in front of the camera, and didn't know what to do with my arms. So, I threw up my fingers, and the rest is history. Every city, beach, and mountaintop I traveled to after that, I turned around and posed the exact same way. At the end of the semester, I put all of the pictures together. It remains the sweetest reminder that I studied abroad.