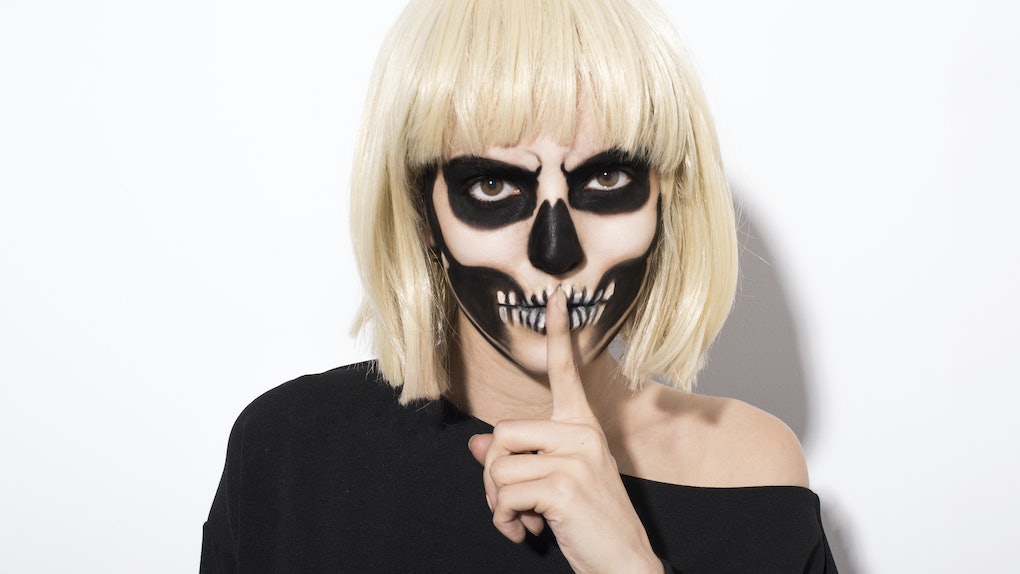 Time slips away from you when you’re hardcore #adulting between college courses and/or a career, so unless you have All Hallows' Eve circled in bold, red Sharpie on your calendar, chances are you’re struggling to pull together a festive look at the very last minute — which isn’t a huge deal, by the way. Last-minute Halloween costumes are generally easy to throw together, but if you’re trying to get uber crafty here, they can require a lot of on-the-spot creativity and hard labor. Rather than wrestle through the crowd of frantic moms picking out their children's costumes at the party store, or desperately scrounging through your own closet to make something work, you can easily score last-minute Halloween makeup looks that negate the requirement to actually dress up.

The power of makeup really comes into play when women (and men, and potentially some forgetful children) overlook Oct. 31 traditions amidst this demanding little thing called life. Luckily, most of us at least have a basic cosmetic collection, and we can use a few products to make us over into something macabre enough to appease an unyielding squad begging you to at least show up to this year's haunted happy hour. Humor them by opting for a last-minute Halloween makeup look instead of a full-fledged costume. That way, you can go to work or class in your everyday attire, and still pass as "festive."

Need a little inspiration? Check out a few last-minute Halloween costume makeup looks below that range from ultra glam, to looks that work if only to get you in a slightly more celebratory mood.

YouTuber NikkieTutorials has officially kicked off her annual series of Halloween tutorials, and allow me to say that bae does not disappoint.

This time last year, the beauty vlogger brought us an assortment of horrifying how-tos, including a super creepy killer clown, pulled-up skin demon, and a glam zombie (oxymoron, much?). But for 2017, Nikki appears to be easing us into things with this royal blood-sucker.

This is the perfect Halloween look for office wear. Even though it's super glam, the only thing that really gives away the fact that you're posing as the undead is a single drop of blood at a standstill in the crook of your mouth. So if you head into your job and notice you're the only one who opted to observe the spooky holiday, you can easily make a bee-line for the bathroom and wipe away the evidence. You'll just look extra gorgeous for the day, and who wouldn't want that?

I think, from a distance, Stephen King's torturous clown's aesthetic looks pretty pro-status, but it's really not that hard to imitate.

The color palette is pretty straight forward; you'll want to make your face as pale as possible, and cling to a combination of red, black, and gray accents for the lips, nose, and smokey-all-over eyes.

James Charles' YouTube tutorial is easy to follow, and even though It is supposed to be scary, I personally think this look is quite beautiful.

Even though Tracie Lynn's tutorial was inspired by Jaclyn Hill's Morphe palette, keep in mind you can achieve this look with any materials you may already have on-hand.

Again, similarly to Pennywise's color palette, a scarecrow's scheme is generally a mixture of orange, gold, yellow, and black. Lynn's interpretation is a little more bewitching than what we know from The Wizard of Oz, especially with such a shadowy, licorice lip. You can definitely alter the look by playing with lip color here, so feel free to tweak as you please!

I think millennials can agree that the '90s were the best years as far as creativity goes. Alternative was the aesthetic, and Lisa Frank definitely brought originality to life with rainbow-colored cartoon scenes spread across notebooks, binders, backpacks, and wall art.

Because the '90s are back in fashion, beauty vlogger Julia Salvia's vibrant cheetah look is giving us life.

You definitely need a wide range of pigments to master the look, but don't head over to Sephora so fast. Anyone who collects eyeshadow palettes can attest to the fact there are a ton of out-of-the-Crayola-box colors brands throw in for a bit of spunk. Now's the time to finally utilize them.

If you haven't noticed, over the last few years or so, fantastical does have been a prime go-to for Halloween makeup looks.

It's hard to deny how adorable these woodland creature looks are, and that's why I'm all for donning Sinead Cady's earthy aesthetic this year. If you're typically a fan of no-makeup makeup looks, and prefer neutral shades to wild pigments, this is an excellent way to stick to your earthy tones.

I am borderline obsessed with MsAaliyahJay's last-minute Halloween makeup tutorial, as it falls somewhere in between skull and jack-o-lantern gone jagged edge.

The best part is that everyone recognizes a skeleton when they see one, so if you're really looking to put in the bare minimum effort outfit-wise, you're set with this look.

Pro tip: I'd personally recommend making sure whatever product you're using to stitch your lips is nontoxic, because the tutorial calls for a deep set.

Is this last-minute Halloween makeup tutorial cheetahlicious enough for you, babe?

Taking a step back from creepy clowns and sexy blood-suckers for a sec, I'm all about this bold feline look. I think when people think "glam" makeup, they automatically assume the routine is going to entail an overwhelming amount of detail and high-end products. But Delgado's look is less about the products, and focuses more on color scheme and creativity.

A dramatic cat eye here, some spots there, and you've got yourself a costume beaming with growl-power.

I'm willing to bet we can expect to see a breakout of Playboy Halloween costumes this year in honor of the late Hugh Hefner. Don't get me wrong, I love a sexy little number as much as the next person, but if you're trying to stand out on All Hallows' Eve, consider taking the cutesy woodland creature route instead.

Obviously Tina Halada's tutorial is ultra glam, so feel free to play around in order to find a look that suits you best, though I have no doubt in my mind this look will attract all eyes to focus on you.

Somewhere down the line in my life, dolls started to scare the living crap out of me. Personally, I cannot be in a room alone with one or I'll freak TF out — which is probably why porcelain dolls are, in my opinion, one of the most basic, creepy costumes you can sport come Halloween night.

However, doll makeup totally has the potential to be cute. It really all depends on how you interpret the toy. Whenever I recommend doll Halloween makeup, I always resort back to Ingrid Nilsen's collab with CoverGirl. I think this is an excellent tutorial on how to master a basic doll look, giving you enough wiggle room to build on for dramatics if you so choose.