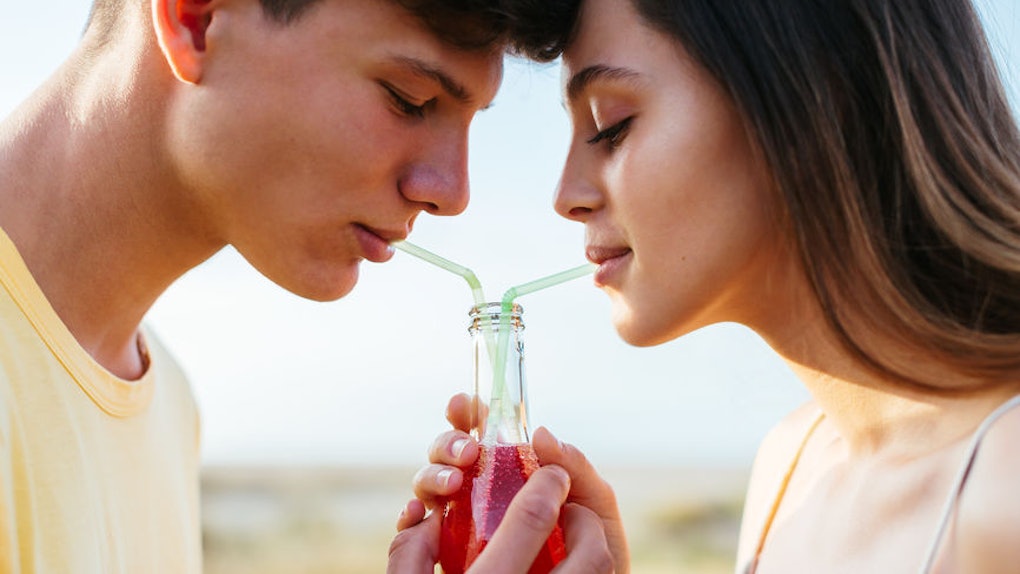 7 Early Signs You've Met "The One," Because It Was Love At First Sight

“The One” — an elusive person who, for some inexplicable reason, you’re certain that you’re supposed to spend the rest of your life with. Some people say you'll “just know” when you’ve met them, but the reality is, there isn’t always a lightning bolt moment. Luckily, there are early signs you’ve met “The One" that can serve as all the proof you need.

Some people say they knew they found “The One” because they were on the same page about all the important stuff — like their core priorities, goals for the future, values, and morals. Others say their relationship just felt easy peasy from the get-go, and that effortlessness highlighted that they were a perfect fit. For many, it takes having friends and family express their overwhelming approval for bae to know that they’ve found their life partner.

As it turns out, though, you don’t always have to wait until you’ve hit major relationship milestones — like moving in together, meeting the parents, or saying those three little words — to have this earth-shattering revelation. If you pay attention during those early stages of dating, you’ll find that there are some subtle cues that say a whole lot about your compatibility, comfort, and connection with someone. So, keep a lookout for these early signs that you could be with your forever person.

You’re happy doing the most mundane things together.

It’s one thing to look forward to those indulgent dinners at trendy, dimly lit gastropubs and romantic wine picnics in the park. But if you honestly enjoy running everyday errands with your boo, that’s a super positive sign.

For example, going grocery shopping or folding laundry may honestly be the bane of your existence — but when you do these things with bae, they’re surprisingly enjoyable. This indicates that their presence can make anything more enjoyable, and TBH, that’s a person you want to keep around. After all, your potential future together will be filled with all kinds of mundane tasks, so if you know that their mere existence makes those experiences entertaining, then you may very well have found “The One.”

When you first start dating someone new, there may be certain topics of conversation that you find yourself a tad close-mouthed about. It makes total sense — while getting to know them, you’re looking for cues that it’s safe to be vulnerable. But if you find yourself being able to let your guard down very quickly with someone, that’s a stellar sign that you may have stumbled upon your soul mate.

When you’re able to share information with them freely without fearing that you’ll be judged or rejected, that typically means that you not only feel super comfortable around them but also that you feel a sense of emotional security around them.

You feel like you’ve known each other for forever.

If you have this bizarre feeling as if you’ve known your new boo for much longer than you actually have, that’s another spectacular sign that they could be “The One.” You know those old friends who you can lose touch with for months or years at a time and when you reunite, it's like no time has passed? It's kind of like that — except, of course, you never knew each other before. This explains why you feel comfortable sharing intimate details of your life so quickly, or teasing them a bit as if you've been together for a long time.

Shortly after my current boyfriend and I first started dating, we marveled at this strange sense of déjà vu that we had in being with each other. It was difficult to wrap our minds around the idea that we had only been hanging out for two or three months because it felt like we’d been together for years. I have a theory about this. This overwhelming feeling of familiarity happens because whether consciously or subconsciously, you knew exactly what you were looking for — and you found it.

You're suddenly dropping "we" all over the place.

In the Sex and the City season 2 episode, “They Shoot Single People, Don't They?” Samantha begins dating a club owner who starts referring to them as “we” almost immediately, and it totally wins her over. While this may not have turned out well for Sam (because the club owner can’t follow through on all his “we” promises), it can actually be a good thing. When you start discussing potential plans with someone without fretting that you’ll freak them out and send them running for the hills, that’s a powerful sign that you feel super confident in your bond.

In fact, a 2002 study conducted by psychologists at the University of Texas at Austin revealed that people who felt deeply connected to their partner were more likely to use plural pronouns like “we” and “us” rather than the singular “I” or “me.”

So, take note if you or bae casually starts saying things like “We’ll have to check out that new restaurant that’s opening up in the fall,” or “We should do a road trip once the weather is warm.” That’s a solid sign that you can see them in your future, and they can see you in theirs.

You don’t sweat the small stuff.

The early stage of dating someone new can be riddled with anxiety. You might stress over what to wear on your date, whether to call or text them, and whether it’s too soon to let them meet your friends. If you find that all of those typical concerns are MIA, then you may have met “The One.”

The thing is, when you’re with the right person, you’re less likely to sweat the small stuff because you may feel an overwhelming and inexplicable sense of calm and security with them. That means you probably don’t obsess over when to text them back — because you don’t have to fret about playing it cool or keeping your distance.

Fights are an inevitability in any relationship. But according to prominent couple’s therapist Dr. Gary Brown, there’s a big difference between arguing to “win,” and arguing to reach an understanding.

When you have a conflict with your boo, are you able to really listen to each other and eventually find a middle ground (or agree to disagree)? That’s a strong indicator that they could be life partner material. Not only does compromising show that you respect each other’s perspectives, but it shows that you can use your conflicts as an opportunity for learning — not merely a battle to be won or lost.

You challenge each other.

While having some common ground is obviously important in relationships, having some differences can equally helpful. The key is finding someone whose differences complement you and push you to be the best version of yourself.

For example, if your boo is more assertive than you are, then they may be able to challenge you to start speaking up for yourself, setting boundaries, and saying no when you need to. If you’re more of a risk-taker and bae likes to play it safe, then you may challenge them to be a bit bolder in pursuing their goals.

Getting each other out of your respective comfort zones can mean you’ve found “The One,” because it indicates that your relationship inspires you both to grow as individuals.

Sure, some people say that love at first sight exists. But sometimes, you need a little more than a quick glance or a gut feeling to assure you that this is “The One.” If some of these signs sound familiar, congrats — it seems you may have met your #EndGame.