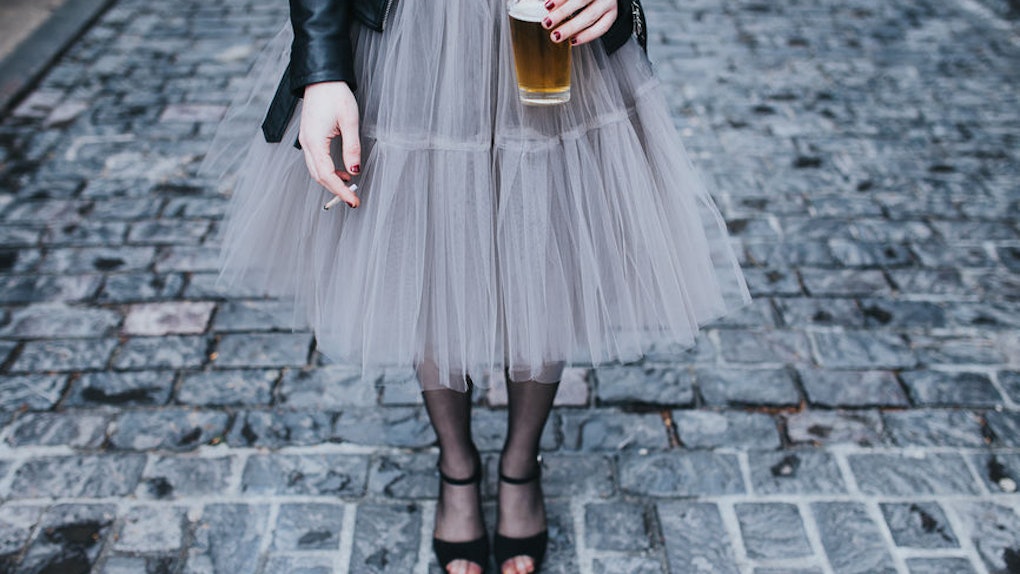 6 Viral Wedding Dramas That Are Juicy AF, So Grab The Popcorn

The words wedding and drama just seem to go hand in hand, like music festivals and crop tops or wine and The Bachelorette. And it makes sense when you think about it: A wedding can be an expensive, stressful event to plan, and with high takes (we’re talking about “as long as you both shall live” here) and so many different personalities at play with two families merging, there’s a lot of room for things to go wrong. Need proof? There are countless viral wedding dramas that have nearly broken the Internet, not just for their shock value but also for their sheer relatability.

Not to brag, but I’m kind of an expert on the subject. I’ve attended weddings where the mother-in-law and the bride were butting heads about so much that the groom had to play peacemaker, where numerous relatives were trying to convince the groom not to go through with marrying the bride, and where the bride had hooked up with majority of the groomsmen, but the groom was blissfully unaware. Basically, rom-coms have nothing on what I’ve witnessed.

But not all drama is created equal. There are the small snafus, and then there are the epic blowouts that go down in Internet history. Here are a handful of those legendary tales.

The bride who banned her bridesmaid’s son from attending.

Attending a destination wedding can be a super costly affair. So, imagine if not only did you have to figure out airfare, accommodations, and other logistics, but your son was also banned from attending the wedding? That’s what happened to one bridesmaid, who posted about her horror story in the online forum Mumsnet in the spring of 2019. Apparently, the wedding invitation dictated that no children were allowed. But when the bridesmaid asked her friend (the bride) to clarify, she told her that her two-year-old son could come. Given that finding childcare would have been a significant challenge, the bridesmaid was obvi super relieved. But then things took a very awkward turn. After she and her husband had taken time off from work, paid for their lodging and figured out their transportation, the bride suddenly flipped the script and informed the bridesmaid that the wedding is strictly an adults-only event. Her suggested solution? For the bridesmaid to come stag and leave the husband at home to take care of the son.

The bridesmaid asked if she was being unreasonable for being irritated about the whole ordeal, and it’s safe to say that readers were definitely on her side.

“I’d tell her to stuff her wedding and use it as a holiday with [your husband and child] (or ask her to reimburse your costs),” wrote one user, while another chimed in with “What an awful friend — and telling you after you’ve booked!” IMHO, they have a point.

The bride who demanded money from guests.

This one takes the term “bridezilla” to a whole new level. It all started when a woman who "wanted to be a Kardashian for a day" (um, get in line?) realized that she and her high school sweetheart simply didn’t have the funds to shell out for the $60,000 destination wedding they had dreamed up. So, they came up with a very straightforward solution — to demand that their guests front the money ($1,500 each, to be exact). And if you couldn’t contribute that much, you were no longer invited. This is a real thing that happened, guys.

The bride seemed to think this was a very reasonable request. In a Facebook post, she went so far as to call her “exclusive wedding” a “once in a lifetime party.” She also totally lost it because unsurprisingly, a large majority of the guests refused to contribute that sum to fund the lavish affair — and as a result, she and the groom split up before they said “I do.” In her epic Facebook post announcing the cancellation of the wedding, she revealed that she and the former hubby were "livid" that only eight people sent checks, writing: "Seriously people, what is $1,000? What is $1500? Clearly, not a lot. It would be quite manageable [and] within budget."

Believe it or not, it gets worse. The MOH (who she lovingly refers to as the “c*nt maid of honor”) backed out of her offer, and had the audacity to suggest that the bride was asking for too much (insert applause emoji). The groom offered to do a quick, cheap Vegas wedding and needless to say, for this would-be Kardashian, that idea didn’t go over well. Before long, the gossip took a toll and it came to a head when the bride over heard them calling her a “stuck up b*tch.”

She concluded her post by letting her followers know: “I am cutting all of you snakes off. I am living my life alone now.” Something tells me they weren’t devastated about that.

The bride who had a list of outrageous wedding day “rules.”

Speaking of demanding brides, another story that went viral involves a list of very specific rules for wedding guests to follow, which made waves when someone posted about it on Reddit.

The list of rules, which was apparently sent out to guests by the wedding planner (don’t kill the messenger), had some reasonable requests, arriving 15 minutes early, not recording the ceremony, and not wearing white or ivory — all standard things to ask of your attendees. But some of them were downright rude. Female guests were not allowed to have a full face of makeup, and could only wear their hair in a “basic bob or ponytail.” Oh, and did I mention that guests were required to bring at least $75 or they wouldn’t be admitted in?

On top of that, no one was allowed to talk to the bride under any circumstances. But here's a question: Would anyone even want to after reading those ridiculous rules?

The wedding that got canceled because the bride made out with a rando.

If you’re going to plan a bachelorette party in Playa del Carmen, you can expect things to get a little bit wild. And they definitely did for one former bride-to-be named Emma, who decided it would be a stellar idea to make out with a total stranger. Unfortunately (or fortunately, depending on how you look at it), this blunder was captured by an onlooker, who then posted the photo on Twitter. When the story went viral, the ex groom-to-be, Pablo, caught wind of the situation and called off the wedding. While Pablo must have been heartbroken, at least he was able to find out the truth before he said “I do,” right?

The groom who got revenge on his cheating bride.

What are you supposed to do when you find out your spouse-to-be has been unfaithful? Do you try to work through it? Do you call things off? For one groom, the only way to handle it was to get revenge by exposing his partner’s infidelity.

According to a guy who attended the wedding, and went on The Graham Norton Show to share the story, the groom announced that the guests were going to play a game. He instructed guests with red dots on the bottom of their plates to remain standing, while everyone else sat down. When eight guys were left standing, the groom announced that every single one of them had slept with his wife since they had gotten engaged. Finally, he revealed that he would be getting an annulment. I’m #speechless, y’all.

The bride who savagely read her cheating fiancé’s texts instead of vows.

That’s not the only savage wedding revenge story ever to set the Internet on fire, either. On the night before her wedding, one bride received some truly graphic screenshots from a total stranger — and those screenshots revealed that her soon-to-be-husband had been cheating on her for months, and some of the exchanges were as recent as just days before she and her groom were supposed to say “I do.”

So, what did the bride do? She didn’t want to cancel the wedding, which was mere hours away when so many people had traveled to be there and everything was already paid for. So when it came time to read their vows, she simply read her cheating fiancé’s texts out loud. After exposing him for the scumbag he was in front of all of their loved ones, she thanked the crowd for coming and proceeded to party her little butt off. Now that’s class.

I think we can all agree that we would never wish drama on any engaged couple. That said, if the champagne is going to hit the fan, we might as well get a good story out of it, right? Cheers to the brides and grooms who manage to say “I do” without any of the drama — and also to the ones who serve up viral stories to keep us all entertained.

More like this
Zac Clark & Tayshia Adams Are Wedding Planning & I’m So Pumped
By Lydia Wang
When Are Ariana Grande & Dalton Gomez Getting Married? Here's The Reported Tea
By Corinne Sullivan
25 Instagram Captions For Your First Post-Vaccine Date
By Corinne Sullivan
Stay up to date